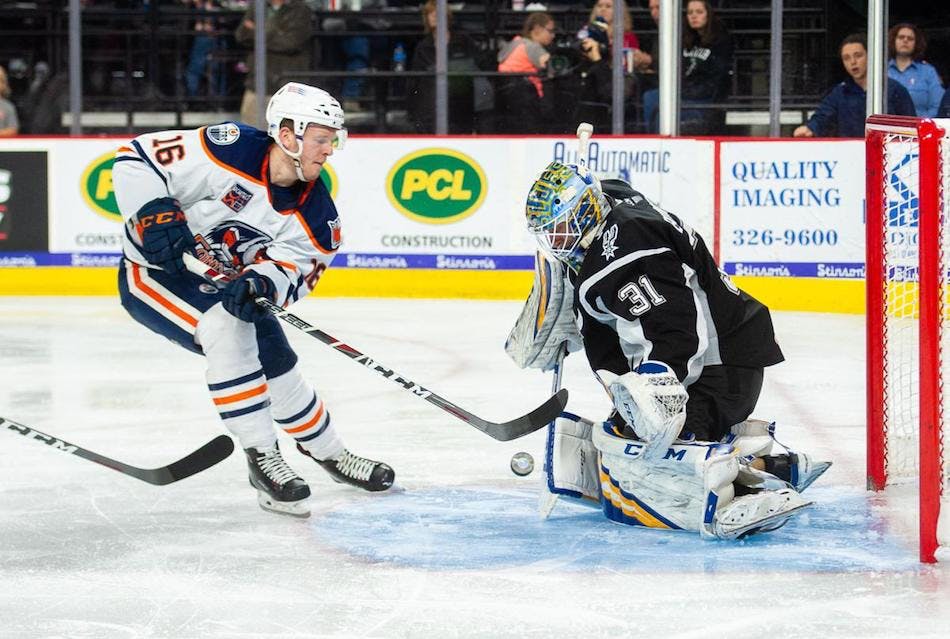 Photo credit: Bakersfield Condors
By Robin Brownlee
3 years ago
Comments
Based on what people in the know say about him, I don’t think there’s a lot of doubt that Edmonton Oilers’ prospect @Tyler Benson is going to be an NHL player. With a terrific rookie season playing for the Bakersfield Condors in the books, the only real question is when. Might it be this coming season?
Benson, 21, who was selected 32nd overall by the Oilers in the 2016 NHL Entry Draft, is coming off a season in which he scored 15-51-66 in 68 games with the Condors, leaving him second in scoring among AHL rookies.
Bakersfield coach Jay Woodcroft has raved about Benson’s ability to pass the puck and his competitive streak. Linemate Josh Currie talks about Benson’s vision: “The plays he makes, the vision he has, you can’t teach that,” Currie said. “You’re born with that stuff, and he has it.”
Advertisement
Ad
Advertisement
Ad
If there’s a knock on the six-foot, 195-pound kid from Edmonton, scouts say it’s his skating, a weakness Benson intends to address this summer with skating coach David Pelletier. He’ll have to, because no matter what Benson showed this season, we’ve seen more than a few careers derailed between the AHL and the NHL because skating was an issue (hello, Anton Lander).

I think Benson has a chance of earning a roster spot with the Oilers this coming season. He certainly made a case for himself with the Condors, and, let’s face it, GM Ken Holland has plenty of holes to fill up front. That said, what the Oilers can’t do is count on Benson to earn a job. That’s a mistake we’ve seen play out countless times and it never ends well.
Advertisement
Ad
Advertisement
Ad
Benson has played 73 games as a pro — the 68 last season and five the season before. There is no need to rush him along. If he blows the doors off in training camp and pre-season and looks like a fit in a middle-six that’s wide-open, fine. Keep him. If not, don’t. You’d think that would be obvious by now, no? Apparently not.

Many folks treating Tyler Benson like he is 18 year old rookie.
He is 21.
He killed it in AHL.
He is ready for NHL third line.

I’ve got no beef with Staples. I just can’t get onside with him stating as fact that Benson is ready to play third-line minutes with the Oilers next season. I think Benson projects as a third-line guy down the road, but now? Next October? Maybe. Maybe not. Saying one way or another with certainty is premature. History tells us we need to see this play out.
Advertisement
Ad
Advertisement
Ad

I think anyone who says they know for sure right now is getting ahead of it. Let’s see how he looks and if his feet are NHL ready. Was a good year, but there’s no way of knowing until the game picks up around him.

“I think there is a lot of room for me to improve,” Benson told Mark Spector of Sportsnet. “Last summer was the first summer I was able to train in three years. That was a lot of workouts missed. There is lots of room for improvement for me.”

Had Benson not been slowed by injuries during his WHL time in Vancouver, he would have been a first-round pick in 2016 — how high, I don’t know for sure. There’s no question he’s fallen behind in terms of development since draft day. He gained a big chunk of that back with the Condors last season. Given the lack of depth here, there’s a real opportunity for Benson to earn a roster spot, but he has to grab it, it cannot be gifted. We know this, or should.
Advertisement
Ad
Advertisement
Ad
As of right now, I’d rate Benson as the Edmonton’s top forward prospect, just ahead of @Kailer Yamamoto and @Cooper Marody, but you might see it differently. The bottom line is Benson is healthy at last and if Pelletier can coax another step out of him, we might see him this season. Emphasis on might.