By Zach Laing
3 months ago
Welcome to the 2021-22 season review and 2022-23 season preview player-by-player! In this, and other articles, I’ll be, well, reviewing the Edmonton Oilers 2021-22 season and previewing the 2022-23 season. You can read about the analytics behind my analysis here.
Kris Russell is approaching the 18th green.
The 35-year-old’s career isn’t officially over, but to this point, the Oilers haven’t brought the unrestricted free agent back and no other teams are biting on him.
He’s coming off a one-year deal that paid him $1.25-million and all things considered, he had a good year for the Oilers. Kris Russell has never been a terrible player for the Oilers, but he was given a way-too-generous four-year deal paying him $4-million, when in reality he was worth half of that.
Nonetheless, the Oilers got good value out of his most recent deal. He appeared in 31 games this year scoring two goals and nine points. 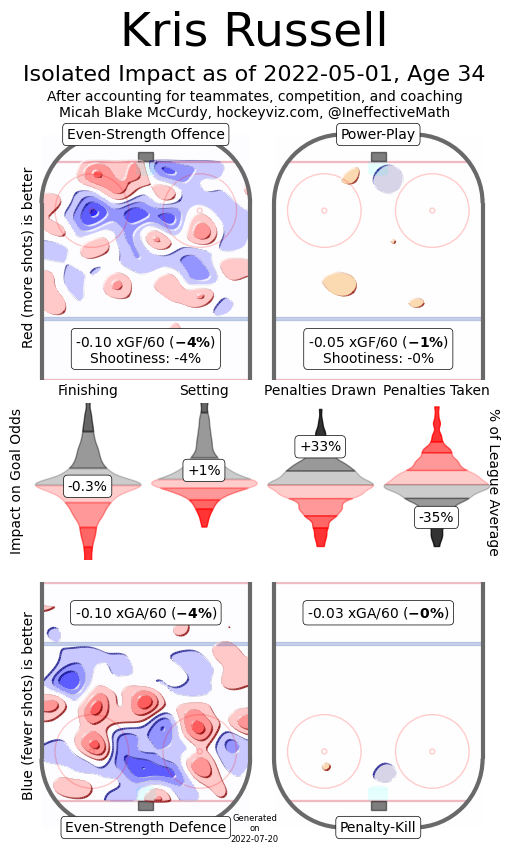 I don’t know how, but Kris Russell is coming off his most productive 5×5 season in terms of scoring ever with his points per hour roughly doubling off his career average. Beyond that, there wasn’t a ton to like from Russell’s game. He had an elevated goal share in thanks to a 102.1 PDO, but the Oilers were never able to control the pace of play.
Despite that, Russell’s isolated impacts were about where you’d expect them to be. He contributes offence at a four percent rate below league average, but provided defence at a four percent rate above league average.

There’s a world where the Oilers bring back Russell on a league-minimum deal, something I’d be a fan of, but he might not want to be back. The Athletic’s Daniel Nugent-Bowman reported earlier in the offseason that Russell was looking to sign with a new team, and a contender.
Russell’s a highly competitive player, so I’d imagine he wants steady ice time, rather than being a seventh, or eighth defenceman like he’d be on the Oilers.
Nonetheless, Russell’s had a long, solid career and holds the NHL record for blocked shots.
Zach Laing is the Nation Network’s news director and senior columnist. He can be followed on Twitter at @zjlaing, or reached by email at zach@oilersnation.com.