The Advantages and Disadvantages of pairing McDavid and Draisaitl together 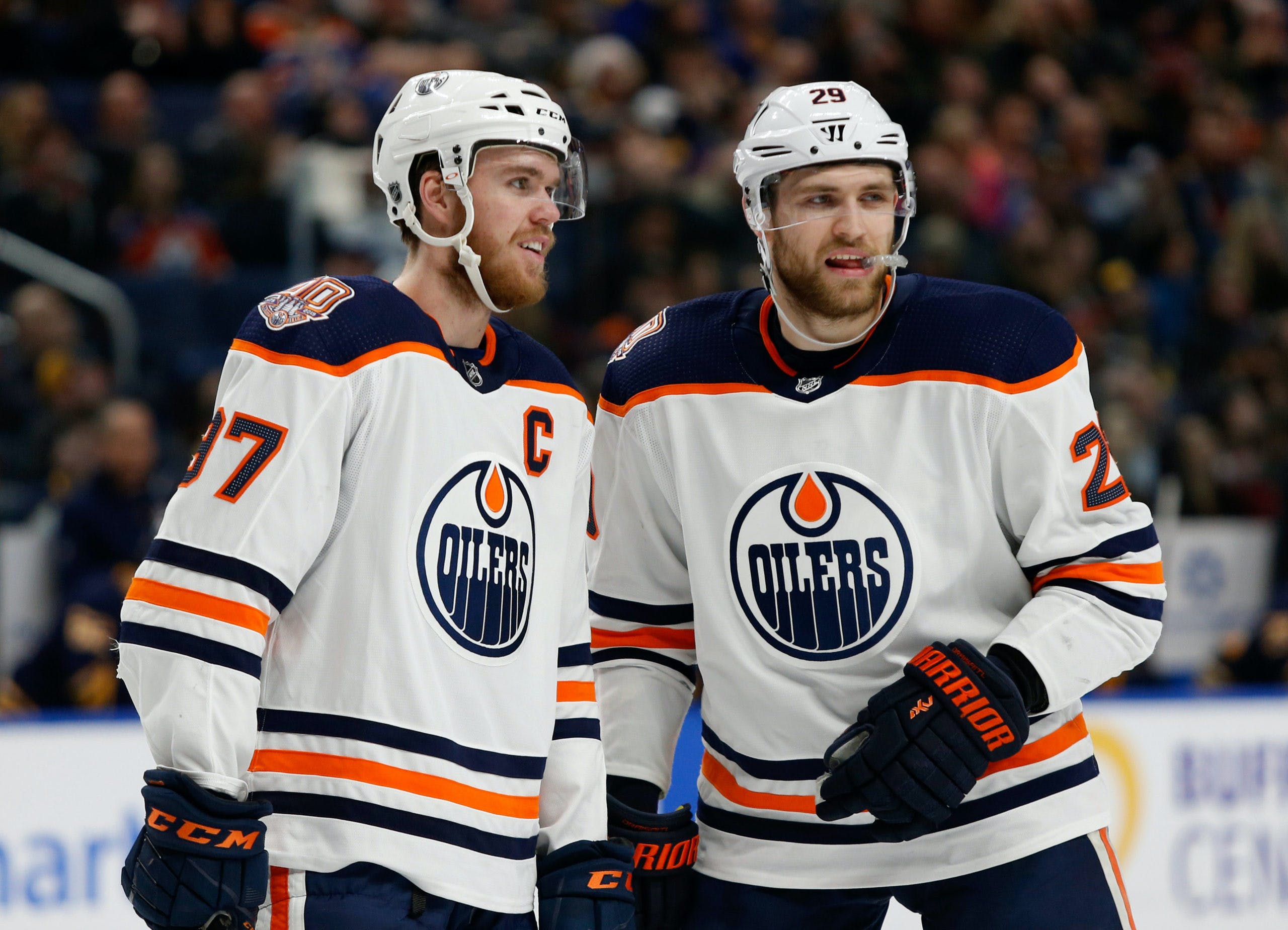 By NHL_Sid
1 year ago
There have always been debates over line combinations for the Edmonton Oilers over the years across social media. These discussions ranged from various topics such as if Milan Lucic should occupy a spot in the top six, if Puljujarvi or Kassian should be Edmonton’s top right-wing, if Barrie or Bear should play with Nurse, and so on.
One specific subject that has been an avid talking point for quite some time is if Connor McDavid and Leon Draisaitl should play on the same line or not.
At the beginning of the pre-season, newly-acquired Zach Hyman was on the left wing with McDavid, the spot he was projected to play in by many. However, this only sustained for two pre-season games. The “dynamic duo” of McDavid and Draisaitl returned and they began the season paired together alongside Jesse Puljujarvi.
During the season opener on Wednesday night, the Oilers won 3-2 in the shootout, and the top line generated the season’s first goal. However, they were also on-ice for the game-tying goal and allowed chances against at a higher rate than any other line.
It’s not shocking at all as to why it’s such a frequently debated topic. This is especially true this season due to the improvement in Edmonton’s forward depth, allowing for a variety of acceptable lineup options.
In this piece, I’ll be diving into the various advantages and disadvantaging of stacking Edmonton’s top line. Is playing their two superstars together the best option for Edmonton? Or will it result in an imbalance in depth throughout the lineup and transform the Oilers into a one-line team?
*All stats via EvolvingHockey unless stated otherwise

The exceptional offence
It’s no secret that perhaps the biggest reason as to why McDavid and Draisaitl should be deployed together is due to their offensive chemistry. 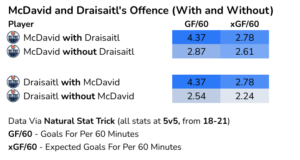 No matter how you look at it, both of these two superstars are superior offensively when on the same line. McDavid’s dazzling play-making and Draisaitl’s deadly shooting abilities are an excellent match. The duo has a Goals For per hour of 4.37 in the past three seasons, which is almost 1.8x the league average GF/60 of 2.45.
It isn’t a shock as to why they’re frequently referred to as a “nuclear” option, as Edmonton is at its best offensively when they’re on the ice together.
The addition of Zach Hyman
I strongly believe that a lot of Toronto fans underrated the value of Zach Hyman.

Hyman’s numbers without Toronto’s two top centers have been superior to both William Nylander and Mitch Marner’s in the past two seasons. I believe that he’s more than just a simple complementary player. These results are a pretty encouraging sign that he can be effective with and without flanking McDavid or Draisaitl, and that there’s every chance he can assist in creating a strong 2nd line with RNH.
Obviously, it’s just the first game, but the line of Hyman – RNH – Yamamoto were exceptional on Wednesday (90.4% expected goal share, 100% scoring chance share).

McDavid and Draisaitl become worse defensively when paired together
While it’s great to see the incredible offence on display when they play together, it comes at the cost of their defensive play. 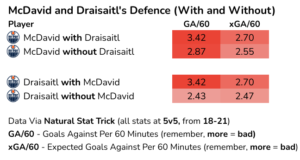 The primary reason for their worse defensive stats when paired together is that they seem to play a “run-and-gun” style of game. Put differently, they essentially seem to focus only on offence but become prone to allow rush chances the other way, and this is reflected in their results. While this leads to more exciting hockey, it also causes more goals and chances against.
It can’t be ignored how much they give up. A GA/60 of 3.42 would be 2nd last for lines with at least 300 minutes in both 20-21 and 18-19, while they would be 3rd last in 19-20. They were still poor defensively without each other, but it was to a lower extent. Not to mention, McDavid’s two-way metrics saw a huge increase in 2021, as he had a very respectable 2.21 xGA/60 without Draisaitl.
Despite their defensive shortcomings, what eventually matters is if the duo scores more than they allow. McDavid and Draisaitl have indeed outscored their mistakes in the past 3 years, as they have a positive goal and expected goal share together.
However, it is a bit unfair to include results from 20-21. Some of the goals they scored weren’t as an actual line, but when they were temporarily paired together after an expired penalty kill or in the last few minutes of a period. When the duo spent significant time together as a consistent line in 19-20, they did not outscore their mistakes (via Natural Stat Trick, they were outscored 34-36).
Their two-way results as a full-time line have been fairly inconsistent over the past few seasons, so it’s certainly a factor to consider.
The quality of teammates for the 2nd pair
Dave Tippett ran a “five-man unit” last season. Throughout many games, the pair of Nurse-Barrie would practically be “glued” to McDavid’s line. In prior years, Klefbom/Nurse would spend roughly 45-50% of their total time without Edmonton’s two superstars. However, in 2021, Nurse spent just 25% of his time without them, while Barrie was at 23%. The five-man unit occurred more frequently when Draisaitl was paired with McDavid.
This leads to tougher deployment for the 2nd pair. They’ll still face tough competition but have a lot less time with McDavid and Draisaitl compared to the top pair. Is this going to be a comfortable role to succeed in for the 2nd pair of Duncan Keith and Cody Ceci?

Many argued that Keith’s abysmal numbers in Chicago were a product of difficult deployment. But, although it won’t be to the same extent, the 2nd pair in Edmonton will still face a considerable amount of tough opposition. Not to mention, McDavid and Draisaitl playing together may result in Keith having a lower quality of teammates than expected. Keith still spent a solid amount of time with Chicago’s top players. As for Ceci, he was 18th among Pittsburgh skaters in QOC% (quality of competition). Consequently, giving him tougher competition in a top 4 role, yet not a significant increase in his quality of teammates, may not be the best idea.
It isn’t the most important or noteworthy downside to pairing McDavid and Draisaitl together, but it is something to keep in mind.
The concerns of running RNH at C and the track record of the “DRY” line
There are questions as to how effective Nugent-Hopkins is at center. He’s posted much better defensive results when deployed as a winger. Is running RNH at C more effective than running him as the LW beside Draisaitl, while McDavid still drives a dominant top line alongside Hyman and Puljujarvi?
The “DRY” line (RNH – Draisaitl – Yamamoto) certainly has a very good track record. Many will recall that they were a key factor as to how the Oilers bounced back after a dreadful December in 2019 to make the playoffs. The trio had a 77% goal share (1st in the league for lines with at least 300 minutes that year) and a 56% expected goal share that season.
However, one of the issues Tippett had with deploying that line prior was due to the wingers McDavid would have to play with. After the loss to Chicago in the 2020 Play-ins, Tippett stated how Edmonton couldn’t be a one-line team and how they would have long-term issues if they played that line. However, McDavid’s options include Hyman and Puljujarvi this season. Consequently, there shouldn’t be any depth issues if they deploy 93-29-56 today.
Why not deploy arguably the league’s best 2nd line and have the best player in the league surrounded by two top 6 wingers on the top line?

I think the Oilers can succeed with and without their two superstars on the same line. McDavid and Draisaitl on the same line is certainly not a terrible idea. Nevertheless, I feel that the cons outweigh the pros. With Hyman, you can definitely run a solid 2nd line, but the lineup becomes much more balanced with Edmonton’s two superstars centering their own lines.
McDavid is still the best player in the league regardless of if Draisaitl is on his line or not, so adding more offence to the top line at the expense of defence and a lower-scoring 2nd line isn’t worth it in my opinion.
I feel that the method in which Tippett deployed them from January – March of 2020 was nearly perfect; the only occasions in which McDavid and Draisaitl would play together at 5v5 would be after a penalty kill or late in a game when Edmonton needed a goal. I think that deploying them as a full-time line at 5v5 isn’t a sustainable, long-term option, but, I do see why many still view it as a good idea. What are your thoughts on if McDavid and Draisaitl should be deployed together or not?
Find me on Twitter (@NHL_Sid)

After signing up for a free account, we’re going to give you a bunch of boxes with player names and you’re going to pick a name from each box until you’ve put together a super crew that you think can contend for a NationDrafts championship. Seems easy, right? It is easy and that’s not just because you’re wicked smaht. Sign up for FREE right here.
Nation Takes
Oilers Talk
Recent articles from NHL_Sid