The Day After: Oilers score six in ode to the ’80’s 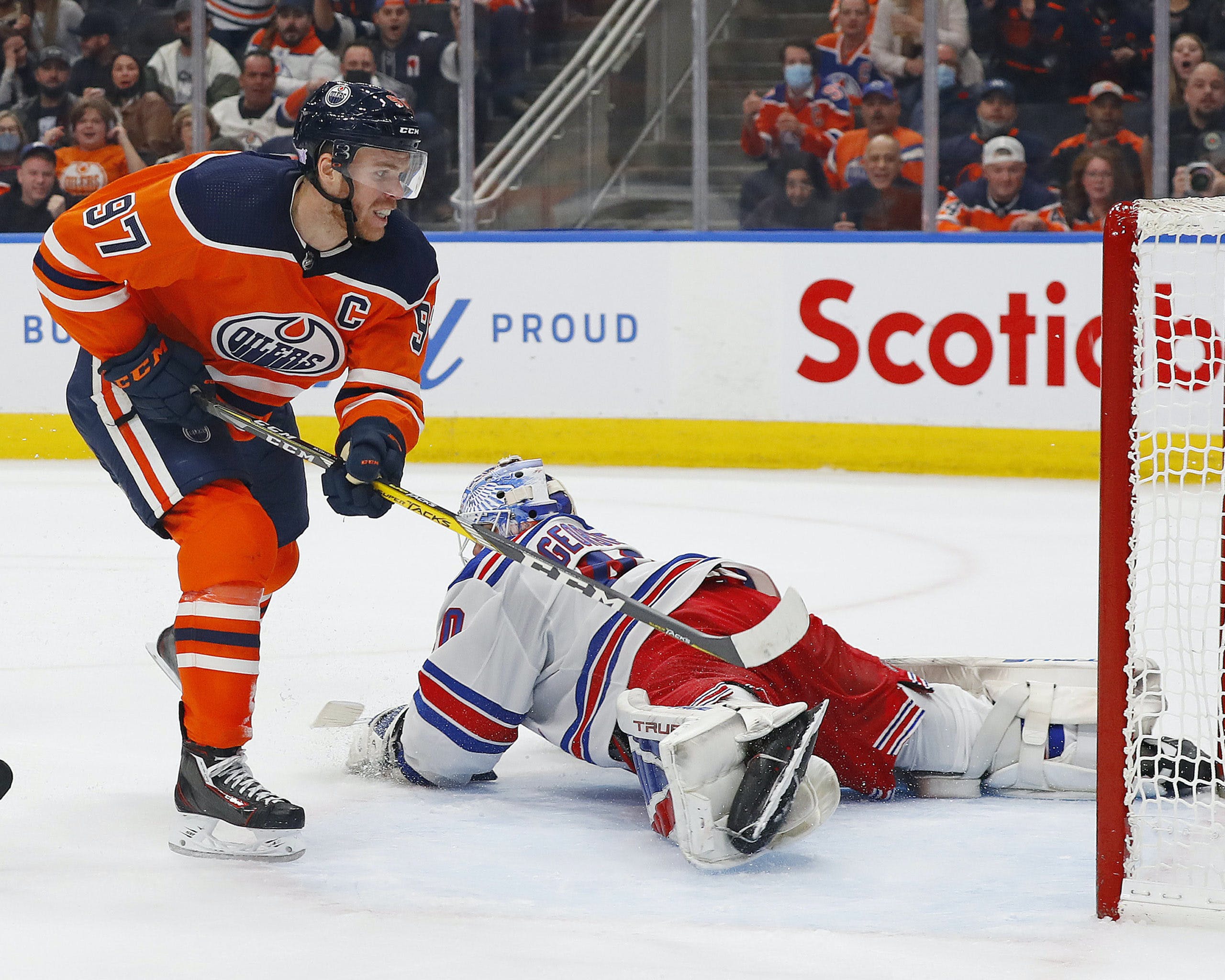 By Zach Laing
1 year ago
In terms of sports, there are big moments and then there’s what Connor McDavid did last night by blowing the roof off of the entire hockey world.
While the talk of the town should be about Kevin Lowe’s number 4 finally being lifted to the rafters of Rogers Place, everyone’s talking about McDavid’s game-tying goal in the dying minutes of the third period.
With little time to spare, McDavid danced through four New York Rangers players to somehow score a goal that would send the game to overtime, where Edmonton would steal a 6-5 win.
“I’m paid to score big goals, I’m paid to do that type of stuff,” said McDavid after the game. “I’m just doing my job. Probably not the best idea to take four guys on every night, but I thought the situation was weird. Everyone was coming up, I was coming down the pipe. I just tried to make a play.”
And make a play he did.
It was only fitting that on the night of Lowe’s jersey being retired, the Oilers would pull off a game that resembled something of the mid-80’s Oilers.
Back and forth. Ebbs and flows. Lots of goals and not a lot of defence.
But last night, the Oilers were able to make the most of them count. Even after this team had themselves seemingly down and out following turnover after turnover and some big defensive lapses by Duncan Keith and Darnell Nurse, they still found a way to win.
‘We made some mistakes, we made some giveaways and it’s hard to get a gap when you turn it over and all of a sudden they’re right at you,” Oilers head coach Dave Tippett said after the game. “We made some puck errors that cost us tonight.”
And even with those key faults, Edmonton fought back. With Zach Hyman opening the scoring in the first, Jesse Puljujarvi had two tallies, one where he fired an absolute missile of a slapshot from the right faceoff dot and another fighting for a loose puck in space in front of the net. Tyson Barrie, too, helped out with a well-placed wrist-shot on the powerplay.
In overtime, with the game on the line, Leon Draisaitl capped the game off with his 10th goal of the year placing him in a tie for top spot in the league with the ageless wonder, Alexander Ovechkin.
While those early miscues and costly mistakes leaving goaltender Mikko Koskinen out to dry are undoubtedly frustrating, there’s something to be said about a team that can overcome a 4-1 deficit, allow another goal and still find a way to come back and win the game.
Allowing three goals in the first 6:56 of the second is never what you want to see, but for a team as deep as the Oilers are this year, who is to say they can’t make the comeback a possibility? This group appears to be one that’s special, as Tippett alluded to after the game.
“We hung in there and we found a way to win,” he said. “We’ve been talking about it all year, finding a way to win.
“This is a good group. This is a special group. They believe in themselves in there and that’s a good step in the right direction. We’ve got a real challenging next couple of weeks with some road trips.”

For the second straight game, the Rangers blew a multi-goal lead in the third period and were pushed to overtime. And for the second straight game, they lost.
Leon Draisaitl buried the game-winner 3:27 into the extra period to secure a 6-5 win over the Rangers on Friday night when former Blueshirts captain Mark Messier and other Hockey Hall of Famers gathered at Rogers Place to watch 1994 Rangers Stanley Cup champion Kevin Lowe’s No. 4 Oilers jersey raised into the rafters.
Top-line center Mika Zibanejad had sniped the Rangers’ fifth goal of the night off the rush at 7:18 into the third period to counterattack the Oilers’ three unanswered goals, setting a new season-high for the Blueshirts. Edmonton’s top-line center Connor McDavid undressed four white jerseys with less than three minutes remaining in regulation to force the extra period.
“I think we did a good job getting the puck behind their ‘D’ and having some O-zone shifts, I don’t think we had near enough of that in [the] third, like we had in the first and second” said Zibanejad, who also recorded a power-play goal in the second. “I think just got to keep going, really, not to be stupid, but we know they have to go forward. Try to take their momentum away and get a couple shifts in their zone. Some zone time that will definitely help, and I don’t think we did enough of that in the third.” – Mollie Walker, New York Post

The latest from Laing