The Day After: Koskinen falters as Oilers win streak ends 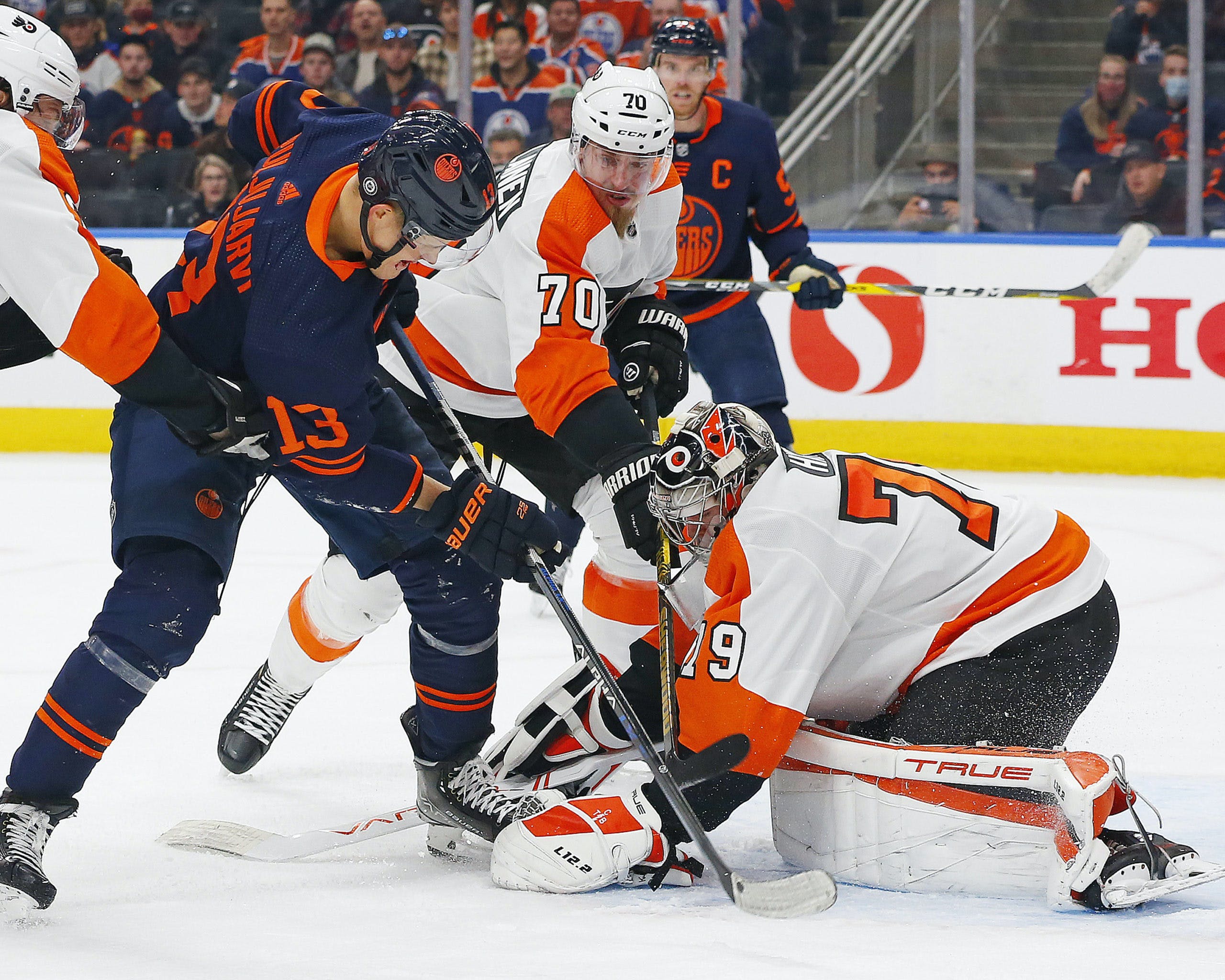 By Zach Laing
1 year ago
In the worst possible way, Mikko Koskinen looked like Mike Smith last night.
Two goals in the first 10 minutes of the game showed that. Claude Giroux caught a bounce off the wall catching Koskinen out of position on the other side of the net allowing for an easy wrap-around tally.
Three minutes later, Koskinen tried to play the puck behind the net but coughed it up to Nicolas Aube-Kubel who came in hot and heavy on an aggressive forecheck. Both instances are reminiscent of Smith’s struggles in his first year in Edmonton.
The game ended up 5-3 in favour of the Philadelphia Flyers, but it’s not like the Oilers rolled over. Tyson Barrie scored one of the nicest goals I’ve ever seen, and Connor McDavid also got on the board with a powerplay goal that eeked by Flyers goalie Carter Hart.
“I think (Koskinen will) bounce back. He’s played well this year,” Head coach Dave Tippett said after the game. “There was one outside the net he’d like to have back, and one inside the net he’d probably like to have back. That being said, we had enough chances to have a chance to win the game, and we didn’t do it.
“That could be some of the best hockey we’ve played all season right there. Our second period was our best period of the year. A couple of mistakes and a couple of bad bounces, and we’re chasing the game a little bit once they got a lead in the third period. They shut it down pretty good, but it was a really competitive game. I liked the way our guys competed. We played fast, created a lot of chances, but we didn’t capitalize on enough of them.”
Cam Atkinson potted two more, and Zach Hyman got his sixth goal of the year, but the Oilers couldn’t hold on.
It’s not like Edmonton played back, per se. The Flyers just got luckier when it counted and made the most of some opportunistic bounces.
Had any of the great looks that Jesse Puljujarvi had gone in, it would’ve likely been a different story.
But at the end of the day, a loss was bound to happen sooner rather than later. The Oilers are a good team, a deep team and one that is going to lose a few more games down the road.
The question is: how will they respond? Edmonton heads to Vancouver for a Saturday night game against the Canucks, before a three-game homestand against the Seattle Kraken, Nashville Predators and New York Rangers.
Then, the true test for this team: a five-game road trip that takes them through Detroit, Boston, Buffalo, St. Louis and Winnipeg — all teams that have been highly competitive to start the season.

Just when the Flyers needed him to, winger Cam Atkinson came up clutch.
Atkinson, who scored the go-ahead goal against the Boston Bruins one week earlier, did the same in the Flyers’ 5-3 victory over the Edmonton Oilers on Wednesday night. The offseason acquisition’s slap shot on a three-on-two rush sneaked past the glove of goaltender Mikko Koskinen and sealed the Flyers’ third victory of the season.
Atkinson scored the go-ahead goal, but goaltender and Sherwood Park, Alberta, native Carter Hart was the reason the Flyers were in a position to win to begin with. The Oilers outplayed the Flyers in the second period, putting 12 shots on goal to the Flyers’ six. Hart stopped all but one of the barrage of pucks and the score was 3-3 heading into the third period.
After Atkinson’s goal, Hart continued to preserve the Flyers lead, denying the Oilers’ two shots on one final power play. Hart finished with 34 stops and a .919 save percentage.
“Against a team like that, they’re super explosive and they can make plays out of nothing,” winger James van Riemsdyk said. “So you always have to be on your game defensively, and certainly the goaltender’s a big part of that. So he made a lot of big stops for us. And that was a big team effort.” – Olivia Reiner, Philadelphia Inquirer