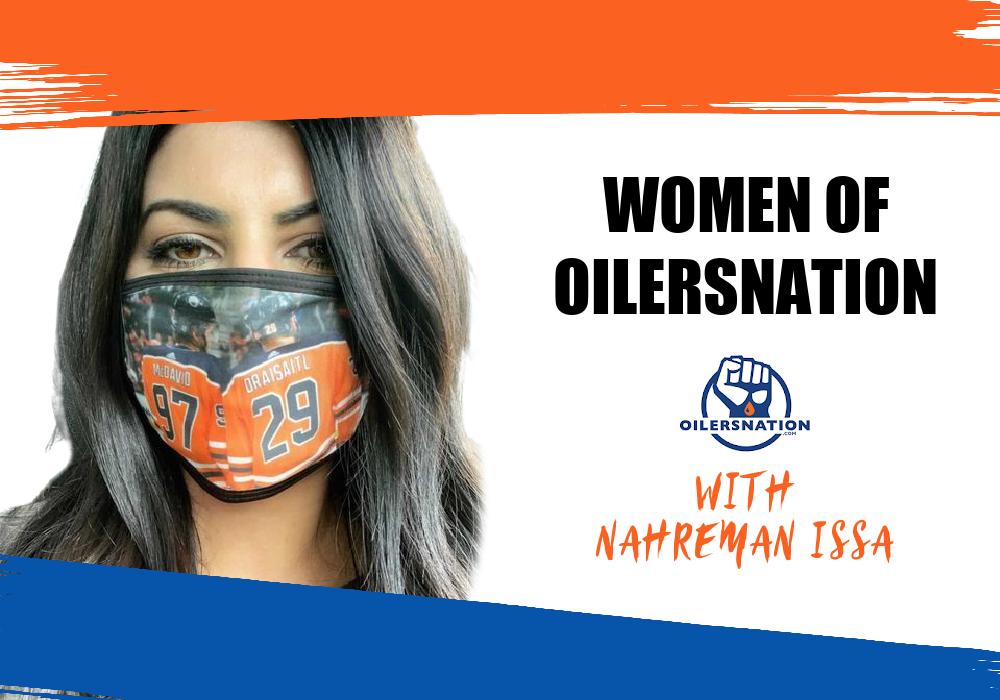 By Kyla Lane
1 year ago
This week’s Women of Oilersnation feature is such a gem of a human! Nahreman Issa is an Oilers fan, news anchor and reporter here in Edmonton, and a Twitter friend turned real-life friend for me. She may be one of the most passionate Oilers fans I’ve met and I’m pumped to help even more of you get to know her!
Last week I featured Lisa Evans from Play107! If you missed it, you can read her feature here: 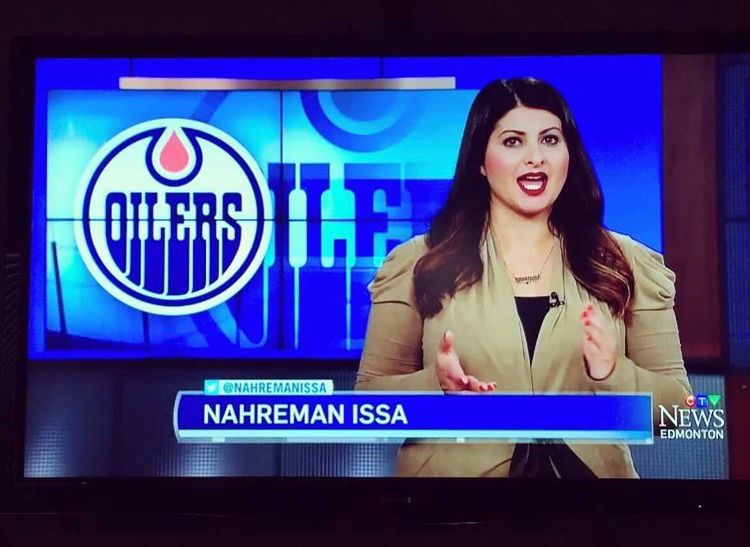 KYLA: Who are you?! What’s your day job, what are your passions, what’s something interesting about you?
NAHREMAN: I’m Nahreman Issa. I am a news anchor and reporter for CTV Edmonton. I am passionate about sports, news, fashion and music (hard rock, grunge, metal. I like to surprise people with that fact).
Something interesting about me is that I am the second youngest of eight kids. We are one boy and seven girls. I also competed against Joey “Jaws” Chestnut in a hot dog eating contest in 2008 at an Oil Kings game. He ate 25 in 5 mins, I ate two!
I also wear one pair of blue and one pair of orange Converse to Oilers games. And I get asked this all the time, that yes I bought two pairs of Converse shoes to do this! I switch them out every so often so both pairs of shoes get the same amount of wear. 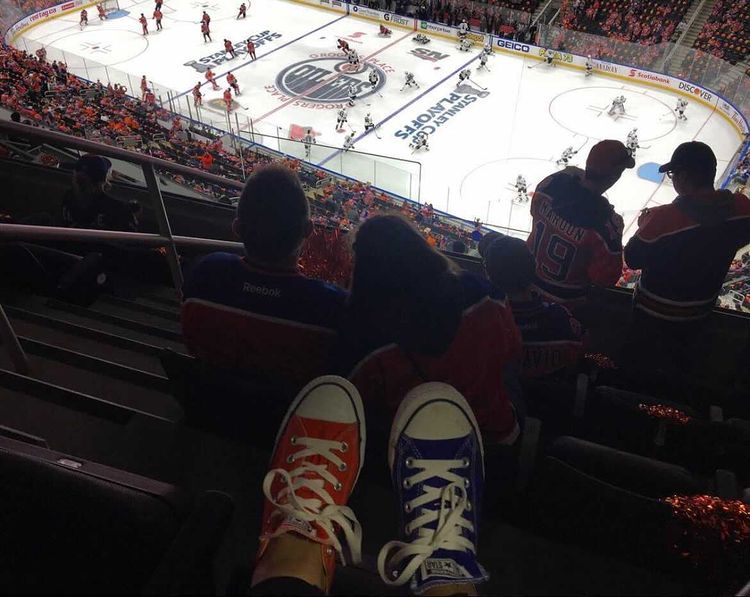 I also have to share this: I got a local artist (shoutout to Hayley Wright!) to paint me this picture of Connor McDavid and Leon Draisaitl standing next to each other on a purse. It was a few months in the making and she did the most wonderful job. I got it done last year. The point is to wear it at hockey games so I will try and see if I can still do that with the new rule! 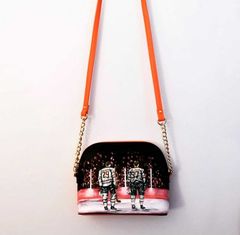 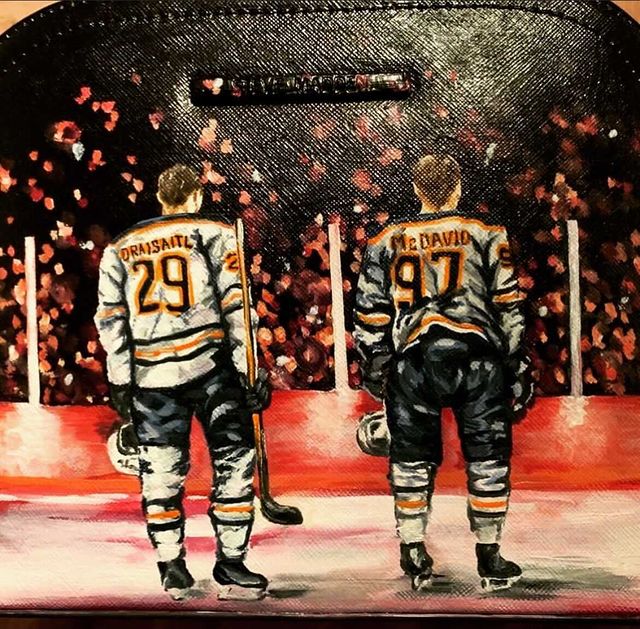 KYLA: How did you get into hockey and sports in general?
NAHREMAN: I got into hockey in junior high (around 1994. Yes I’m old). I grew up in a household of seven girls and one boy. My dad put my brother in every sport basically. But my dad put us girls in soccer. I was just surrounded by sports growing up. One of the childhood memories we all remember as siblings is my dad taking us to football games back in the day. He would bring a big bag of peanuts and eat the whole thing there. I’m sure peanuts are banned because of my dad and the mess he made haha.
My love for the Oilers started in the early 90s. It’s funny that in junior high girls were obsessed with boy bands. I never was. The Oilers, other hockey players (and rock band lead singers) were my crushes haha.
KYLA: Can you take us through your broadcasting journey—from realizing you wanted to do it, to getting into the sports world, and now anchoring at CTV? 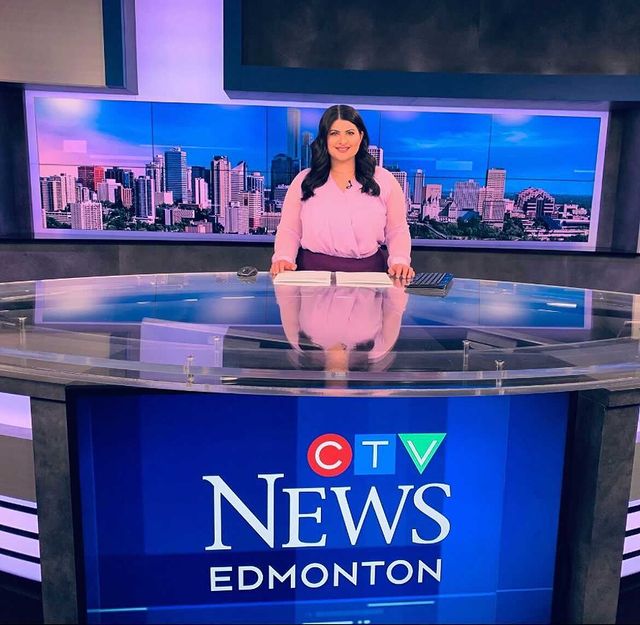 NAHREMAN: Growing up I said I wanted to be a sports reporter or a lawyer. But I never thought as an Arabic girl I would go into TV. No one on TV looked like me. And it was something we never did. At 19 I got a job at a law firm. I thought great, I can work for a bit, get some experience and then go to law school. After my time there I realized I wanted to follow my passion and get into reporting.
I used to grow up watching the six o’clock show. It was CTV too. I think I was the only ten year old reading the newspaper. I always had a passion for the news and knowing what is happening around the world.
So I took a big step in applying for the TV job. I got in and it was the best moment. I knew this is the job I was destined for.  I wanted to do sports but knew I was capable at working in multiple areas.
At NAIT you learn all positions. I eventually got hired on at CTV as a writer over the summer while still at school. It was the best way to get my foot in the door. It also was a result of being a hard worker and someone my teacher felt comfortable enough to recommend me.
I kept writing with them until after my practicum. I got hired on full time to help produce and write on the morning show (when we first launched it). Then, I moved to Lloydminster to be on camera. Back then that was the path you took. Go to a small town and work your way back on camera at a bigger market station. I was a news anchor and sports reporter there.
Eventually I moved back to Edmonton at CTV, where I did every single position basically (reporting, producing, writing, etc.) and I eventually got the morning reporter/noon anchor position I’m currently doing now.
Also important to note: Representation matters. I love seeing more and more BIPOC people getting into the media industry.
KYLA: What advice do you have for other women who want to get into the sports media world?
NAHREMAN: I want to think it’s getting a lot better these days compared to when I was getting in. The thought of women in sports should not be surprising anymore. I would always get comments that people couldn’t believe I was into sports.
You are going to get misogynistic comments, and some people will never like a woman in sports reporting. That is their problem. Not yours. We belong in all sports in all facets. There are so many women who paved the way for us to be involved. I don’t give the haters any time. I belong here. If you don’t like it, that’s on you. Go to therapy and work out why you are the way you are.
Don’t shrink yourself down. We belong!
KYLA: As a born and raised Edmontonian, what’s your favourite part about living in Edmonton? 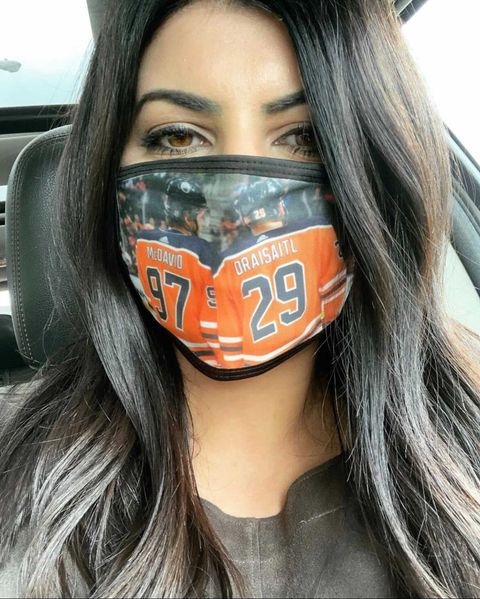 NAHREMAN: Edmonton is such an incredible city. It’s the perfect big city without being a big city like New York.
I love that I can work in the same place I can watch my team. In TV, so many people have to move for work. I love that I have my family and friends here who can watch me on the news. The local shops and restaurants have exploded onto the scene and has made this place even better.
The River Valley is such a gem and we are spoiled to have it. Edmonton has changed so much over the years for the better… it’s home and will always be.
KYLA: What’s your favourite Oilers memory?
NAHREMAN: Hands down, game 7 against Dallas in 1997. Cujo with the incredible save. A few minutes later… Doug Weight taking the puck, flipping it off to Todd Marchant. He takes it up the wing, cuts in front of the net and scores. This memory is forever burned in my head. Including the shot after of Ron Low telling Cujo what a f***ing save!
Another incredible moment was that cup run in 2006. I will never forget the joy of seeing them take down teams… and then the pain of them losing in game 7. That broke me haha.
KYLA: What does hockey and being a part of the Oilersnation community mean to you? 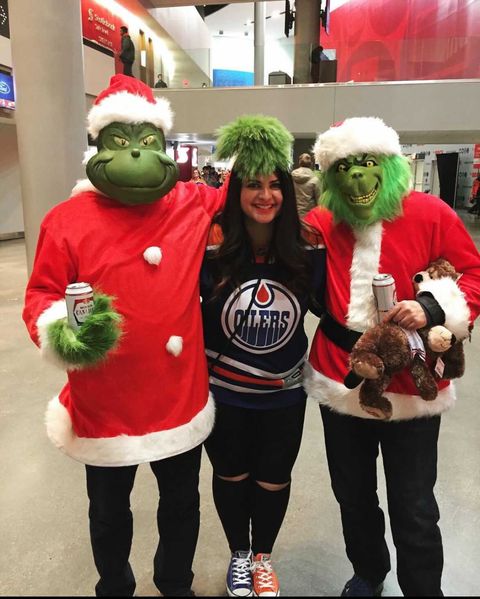 NAHREMAN: Oilers fans are the best (well, there are a few I would trade away). I know how passionate we are and how much the team is rooted in our own identities. I love being in this community and meeting other fans. When you sign up as an Oilers fan, you know it’s for life.
Go Oilers!
CONNECT WITH NAHREMAN ON TWITTER & INSTAGRAM!