By Cam Lewis
1 year ago
I wrote this morning in my Highlights and Numbers post that Evan Bouchard was one of the biggest positives from Edmonton’s 6-5 win over the Anaheim Ducks on Tuesday night.
Tyson Barrie had a rough game, highlighted by him getting walked by Sam Steel on what was, at the time, the go-ahead goal for the Ducks in the second period. After that, Dave Tippett shortened the leash on Barrie and started giving Bouchard more prime minutes on the top pair with Darnell Nurse.
Bouchard thrived with the opportunity, as he played with poise both on the penalty kill and late in the game when the Ducks had the goalie pulled. All told, Bouchard logged 19:36, scored a goal and an assist, and had a 20-to-16 shot attempt differential in 14:58 at even-strength.
It’s early in the season and we shouldn’t draw sweeping conclusions about either Bouchard or Barrie, but I don’t think I’m alone in saying that I’d like to see the former No. 10 overall pick play more prime minutes on the Oilers’ blueline.
That brings us to this week’s What Would You Do Wednesday question. Do you think Bouchard is ready to play top-pairing minutes? How could Barrie be better utilized? Is it best to keep things the way they have been, seeing as the team is 3-0-0 to start the season? 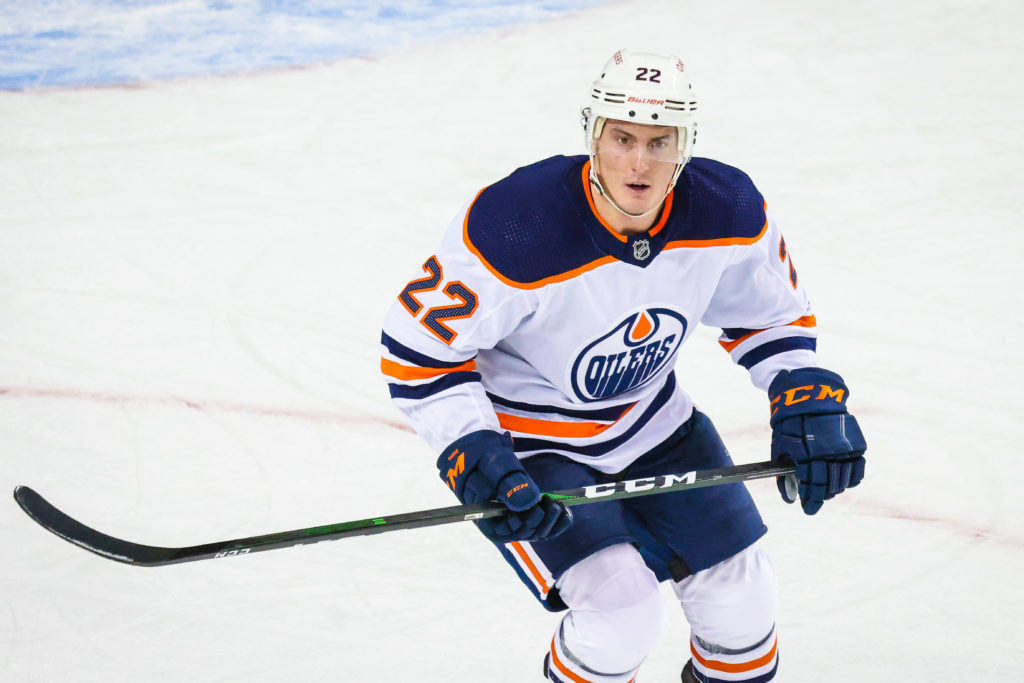 After a productive season on a one-year, show-me deal with the Oilers in 2021, Barrie was brought back on a three-year contract worth $4,500,000 annually. It was a pretty reasonable contract given the fact Barrie had just led the league in points among defenders.
Barrie found some nice chemistry alongside Nurse on the team’s top pairing, which was a role that was previously occupied by Ethan Bear. The Oilers ultimately decided they wanted to keep Barrie around in this role and they opted to deal Bear in exchange for Warren Foegele, filling a need the team had up front.
So far in 2021-22, Barrie hasn’t been as effective as he was last year as Nurse’s partner. Through three games and 47:54 at even-strength, the Oilers are being outshot 60-to-40 with Barrie on the ice and they’re being outscored 3-to-2. That isn’t ideal given roughly 30 of Barrie’s 48 minutes have been played with Connor McDavid and Leon Draisaitl.
Now, to be fair, this is a very tiny sample size and Barrie also got off to a slow start last season as he was getting to know his new teammates and coaches. The right play for Tippett and Co. when it comes to Barrie could be to just let him play and work it out so that he gets into the same groove he found himself in last season. But the Oilers also have a young defender in Bouchard who might do more with these prime minutes.
Bouchard hardly played in 2021. He had a rough outing at the beginning of March in a 3-0 loss to the Toronto Maple Leafs and didn’t see game action until May when the Oilers had their playoff spot locked up. All told, Bouchard played in 14 games, scored five points, and logged 14:50 per night.
Hading into 2021-22, Tippett referred to Bouchard as the “X-Factor” on the Oilers’ blueline, pointing him out as the player who could really make a difference on the team’s defence. Tippett mentioned that he was impressed by Bouchard’s work ethic and how he was hungry to go up against the other team’s top opponents and take on a larger role.
Well, it looks like this might be his chance.
As I mentioned earlier, Bouchard thrived in Tuesday’s game when he was moved up to play alongside Nurse. In 9:28 with Bouchard and Nurse on the ice at even-strength, the Oilers outshot the Ducks 13-to-8, outscored them 1-to-0, and allowed just two high-danger chances against. Bouchard thrived at both ends of the ice, moving the puck around effectively in the offensive zone and joining the forwards on the rush, while playing with poise in the defensive zone as Anaheim was pushing hard late in the game.
What say you, Nation? Do you think it’s time to give Bouchard a look on the top defensive pairing with Nurse? Or should Tippett keep things how they’ve been, given the team is 3-0-0?