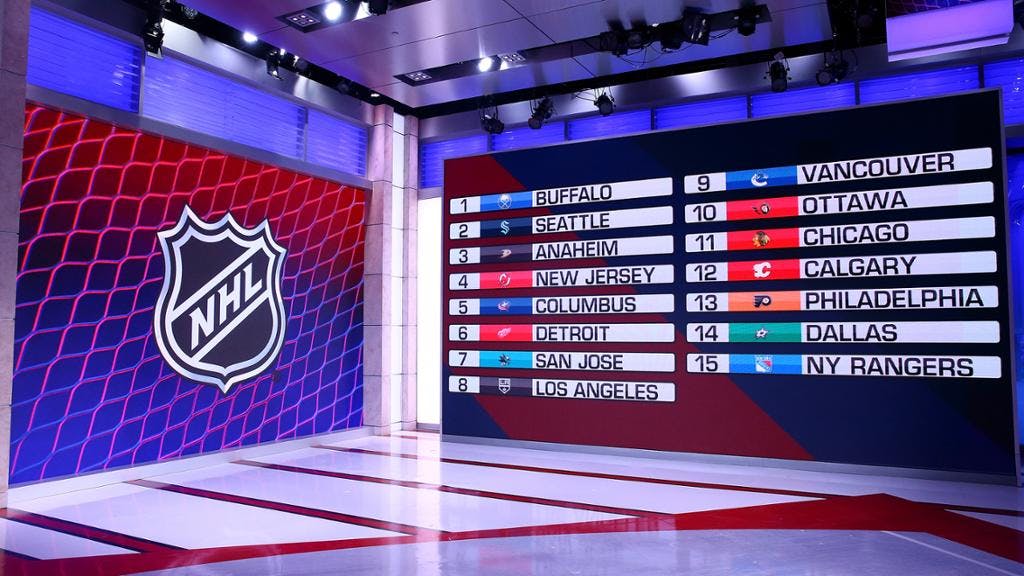 By Nation World HQ
1 year ago
Welcome to OilersNation’s 2021 Draft Countdown, powered by FCHockey.
Over the next few weeks leading up to the draft, we’ll be rounding up scouting reports, quotes, and videos about the Top-100 prospects available. Here are aggregated profiles on Kyle Masters, Olivier Nadeau, Viljami Marjala, Aleksi Malinen, and James Malatesta

“Masters has arrived. Though Red Deer is a bit underwhelming as a whole to date, through their first 4 games Masters has been a stud. Not only has he been taxed with huge, all situations minutes right out of the gate, but he’s learning rapidly and applying lessons to each ensuing situation he’s put in. Masters projects as a puck rushing catalyst who uses his elite skating ability and deceptive puck skill to make plays out from under pressure and allow play continuity. He’s dynamic with movement and extremely agile with masterful edge work which allows him to manipulate opposition routes and creating space with a combination of heel to heel mohawk maneuvers and linear crossovers. He doesn’t seem to underhadle pucks but can change the angle of flow with quick handles and moving pucks from exposed areas to be hidden on his hip so he can make a quick pass or find a shot lane while making the play through weight shift. Although I thought that some of his plays were rather high risk by putting himself into small seams to escape pressure or by putting pucks into bad ice. Every time he went into pick up a puck he was always scanning and shoulder checking so it may simply be about making more appropriate decisions based on the layers of pressure presented and learning to curb his enthusiasm for high event hockey.” – Justin Froese

“Nadeau is a right shot forward who lined up all night on the left side, on a line that featured fellow 2021 draft prospect Xavier Bourgault and 2020 Dallas Stars first rounder Mavrik Bourque. On this night, the threesome had their fingerprints all over the scoresheet with Nadeau leading the way with three goals and one assist, and was named the game’s first star. Nadeau did a lot of things well, but his contributions in the offensive zone as a shooter really stood out. He was able to play in traffic and when he found soft spots in Chicoutimi’s defensive coverage his shot accuracy and quick release were on full display. With his size and skillset Nadeau can capitalize on scoring chances in multiple ways and on this night his willingness to drive to the net paid off in his third goal when he moved through the slot and from in-tight tucked the puck under the bar. There was also some indication of Nadeau’s physical game tonight. While dumping a puck in from the neutral zone, Nadeau was vulnerable and took a big hit that seemed to rattle him slightly. This may not be the way most power forwards prefer to show their willingness to be involved in the more punishing elements of the game but Nadeau’s ability to get back up, shake off the hit and continue to be a physical presence in front of the net and along the boards certainly says something about his compete level.” – Shaun Richardson

“Marjala is a playmaking forward who plays a smooth, relaxed game. His style of play is perfectly fitted for the power play, where he can dissect defenses with his reads and sets up teammates with excellent feeds. Despite unimpressive shooting velocity and accuracy, the left-handed attacker acts as a dual threat on the man advantage, willing to throw shots on net. He did score the OT winner with a slick toe drag release. Through all zones, Marjala enjoys sharing the disc. He possesses an incredible passing touch and vision, enabling him to slip passes in tight windows and discovering outlets rapidly. The left winger showcased decent poise, agility and puck skills carrying the puck in open space, but his dynamic posture could be problematic in traffic. With solid, impactful reads on the PP, but reserved play at even strength, Marjala flashed some intriguing assets that he couldn’t quite translate to 5v5 tonight. If he can add a notch to his quickness and keep active feet, I could see him securing a bottom-six job at the NHL level.” – Andy Lehoux 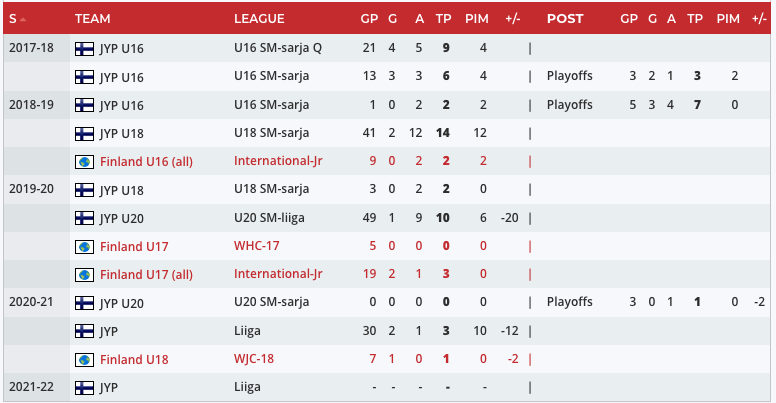 “Malinen is a fairly typical puck-moving defenseman, but the fact that he’s been sticking in the Liiga all season as a 17-year-old stands out, even if JYP is a bad team. There is some dynamism to his skating, as his crossovers and edges are pretty good, and he wants to play quick and push the pace. He’s assertive with his decision-making, making calculated risks to pinch up in the neutral and offensive zones to help his team maintain or regain possession. Gap control against the rush looks good. Shows a lot of confidence with his exits and entries, including times where he goes end-to-end. He drew a penalty in this game while driving wide around an opponent. He can work a little magic at the offensive blue line, making moves to create space and shake off defending forwards. Hands are good, albeit not great. He can receive difficult passes and make quick little moves to settle the puck down, and he can also sometimes maneuver the puck through sticks and skates or quickly chip it into space for himself. However, his success rate with these moves could be better. He also doesn’t have the strength to fight through checks with his carries, at least not yet. His decision-making in all zones needs to improve, but I think it will, because you can tell that he’s focused and alert. He knows to check over his shoulders to calculate the play around him. There is NHL upside to Malinen thanks to his tools and playing style, and I wonder if some of that is being hidden by playing against men instead of against his peers.” – Derek Neumeier

“Malatesta is a speedy, aggressive attacker who brings an amazing energy to every shift with relentless puck pursuits and fiery counterattacks. His first few steps are incredibly explosive, which allows him to beat anyone in foot races and sparks outbreaks in an instant. Thanks to his quick, efficient strides, Malatesta turns himself into a constant rushing menace, possessing the straight-lane speed to bypass anyone given an open file. Going 110 percent every play refrains him from adding deceptively and elusiveness to his game, and this could make him predictable, especially at the next level. He exposed his puck to pokechecks too easily and leant on dump and chase too frequently to beat the first line of defense. His superb quickness, agility and vigor on the forecheck put tremendous pressure on defenders, creating a few turnovers. Malatesta showcased a very quick release on his wrist shot, notably beating the goaltender on the rush in the early second. He also flashed a willingness to create for his teammates, often generously sharing the disc with basic reads. He also used his splendid tempo to occasionally break plays on the backcheck. Malatesta’s pace and competitiveness are outstanding, which in itself, gives him a great chance of finding work on a checking 3rd line at the NHL level. I’d like to see him improve his reads and add changes of momentum to his game, but he’s a great bet for the third round.” – Andy Lehoux