A Jesse Puljujarvi retrospective part one: the draft and his first three years 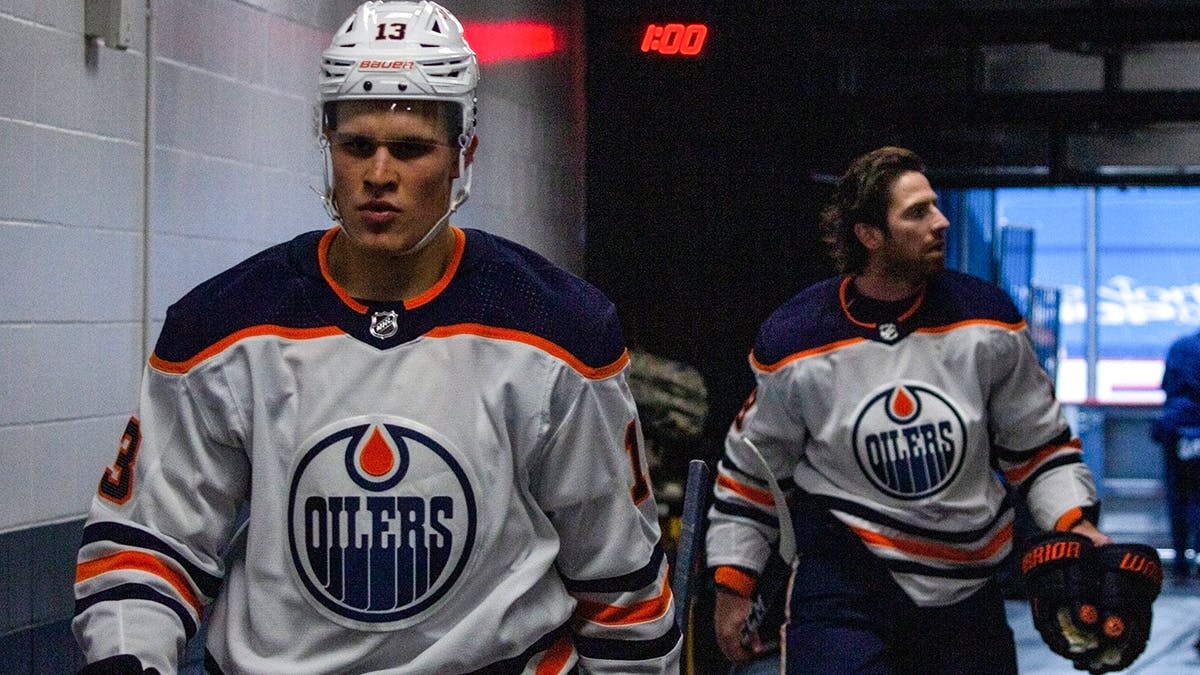 By Zach Laing
4 months ago
At 24 years old, the jury is still out on Jesse Puljujarvi.
Is he a bust? Is he an elite winger? Is he just A Dude who can play middle-six minutes? Should the Oilers play him with Connor McDavid, or should they blast him into the sun?
He’s a tall, and still rather lanky young man. He hasn’t quite filled in his frame and at times looks more reminiscent of a young deer than a 4th overall draft pick. Sometimes, there seems to be a disconnect between his brain and his hands. He fumbles the puck at times, and can sometimes struggle to always capitalize on those Grade A scoring chances.
But he’s also been an incredibly effective and tenacious player. His offensive production from last year alone pencils him in a top-six role and the Oilers’ ability to limit opposing offence when he’s on the ice is tremendous. When you look at 171 NHL forwards who played as many minutes at 5×5 as he did, there were just two players who had fewer goals against scored than Puljujarvi: Nashville Predators forward Yakov Trenin and Tampa Bay Lightning forward Corey Perry. With Puljujarvi on the ice, just 28 5×5 goals against were scored on the Oilers. No matter how you cut it, this past season as a whole was his best in the NHL.
Despite what your dad might’ve said to you as a child when he daintily pulled a quarter from behind your ear, magic isn’t real. It’s not by magic that such few goals are scored against the Oilers when Puljujarvi is on the ice.
So what makes this possible? How is it that Puljujarvi is able to have such great underlying numbers, all the while looking a little weird?
To get a better understanding of where we sit today, we have to dial back the clock by about six years.

On June 24th, 2016, Jesse Puljujarvi became an Edmonton Oiler. The club selected him fourth overall and nobody expected him to fall to the Oilers at 4. Auston Matthews was the unanimous No. 1 to the Maple Leafs, while it was expected Patrik Laine and Jesse Puljujarvi would go 2 and 3 to the Winnipeg Jets and Columbus Blue Jackets.
It made sense for Puljujarvi to go to Columbus. Their GM Jarmo Kekäläinen is Finnish, so it seemed like a natural fit. Plus, the scouting reports on Puljujarvi viewed him as a strong, 200-foot player.
Here’s a report from The Hockey News on Puljujarvi ahead of the draft:

Unlike Laine, Puljujarvi is more of a playmaker and 200-foot player than a pure scorer. He’s not expected to have the same offensive impact Laine will at the NHL level, but there’s a two-way component to his game that scouts like … Puljujarvi will never shortchange his team in effort. But while he’s hugely competitive he’s far more than just a high-motor guy. “Sometimes people see his competitiveness and activity, they get caught looking at that and forget what a good player he is.”

You could take this scouting report, slap the year 2022 on it and it would still be accurate. Puljujarvi does a good, not great job of setting up his teammates in scoring position, and has succeeded in being an incredibly effective two-way player on the ice.
He hasn’t shortchanged the Oilers on effort, either. Everytime he’s on the ice he’s doing something productive to help change the tide.

The biggest mistake the Oilers made was they brought Puljujarvi to Edmonton for his draft+1 season, but we’ll get more into that in a bit. He played in 28 games and right away, he got time with the Oilers big guns. At 5×5, he played 107:28 with Leon Draisaitl, 92:36 with Pat Maroon and 84:01 with Connor McDavid.
Puljujarvi scored one goal and eight points in the that season, all the while playing just 11:15 per game. Things, however, weren’t all rosy. As the season progressed from October and into the new year, his time on ice dipped as did his confidence. It resulted in the Oilers sending him down to Bakersfield, where he blew the doors off.
We saw his confidence come back as did his scoring touch. In the minors, he scored 12 goals and 28 points in 39 games.
Year two, Puljujarvi started the season in the American League where he drew in for 10 games, scoring a goal and nine points. But as the calender flipped to November, the opted to return rookie Kailer Yamamoto to the WHL after his nine game cup of coffee stint.
Jesse came back to the big club and put up 12 goals and 20 points in 65 games — good enough for a 15 goal, 25-point pace over an 82-game season. It was far from great, but a solid clip nonetheless.
His development had been slow, but not completely unexpected. Few European players come to North America and have success right away, but there were some things to like.
Here’s what TSN’s Craig Button said of Puljujarvi’s sophomore season:

“I’ll be very straight forward on this… I thought it was ridiculous to have him over last year [2016-17] in the American Hockey League. I think it’s ridiculous to have him over now [2017-18] and not playing him… I don’t think the Edmonton Oilers have done a real good job of developing Jesse Puljujarvi, and when I watch him play… he looks like his physical strength isn’t quite there, he doesn’t always have his legs underneath him. He can’t assert like he wants to. But you see him at other times, you see the skill, you see the ability to drive and be determined. But when you don’t have confidence in your physical strength, you’re not going to go out there and assert all the time, because you can’t, and you know you can’t. And you’re playing against men and players who are strong and physically developed and mentally and emotionally developed.”

Like his draft profile, this was a pretty spot on analysis. It was becoming more and more clear that Puljujarvi had been rushed into playing with the Oilers and you could, as Button mentioned, see it. He showed flashes here and ther0e of offensive prowess and strong play away from the puck, but the consistency just wasn’t there.
The Oilers really blundered these first two years of his development, but at the end of the day he was still just 19, right? Lots of room to grow, lots of opportunity.
In year three, things were… a disaster. Despite a great pre-season, Puljujarvi fell flat during a season that ended prematurely due to the Finn’s nagging hip injury. He appeared in 46 games scoring four goals and nine points, and there was a lot to yearn for. The injury clearly plagued him in this season, and upon healing, Puljujarvi signed a deal in Finland.
Let’s make one thing clear up to this point: none of this was Jesse Puljujarvi’s fault. He was clearly a very raw player coming out of the draft, and the way the Oilers developed him — or didn’t develop him — seriously stunted his growth in the pro game.
It was just burying him on the roster, nor was it the fact they sent him up-and-down like a yo-yo in those first years between the NHL and the AHL. It was the fact they never allowed the player to find consistency. Hell, his most common linemate those first three years was the boat anchor that was Milan Lucic, who was traded at the end of the 2018-19 season.
On Thursday, we’ll take a look at Jesse Puljujarvi’s trade request, his time in Finland, and his return to North America. On Friday, we’ll look at his 2021-22 season, and what lies ahead.
Zach Laing is the Nation Network’s news director and senior columnist. He can be followed on Twitter at @zjlaing, or reached by email at zach@oilersnation.com.