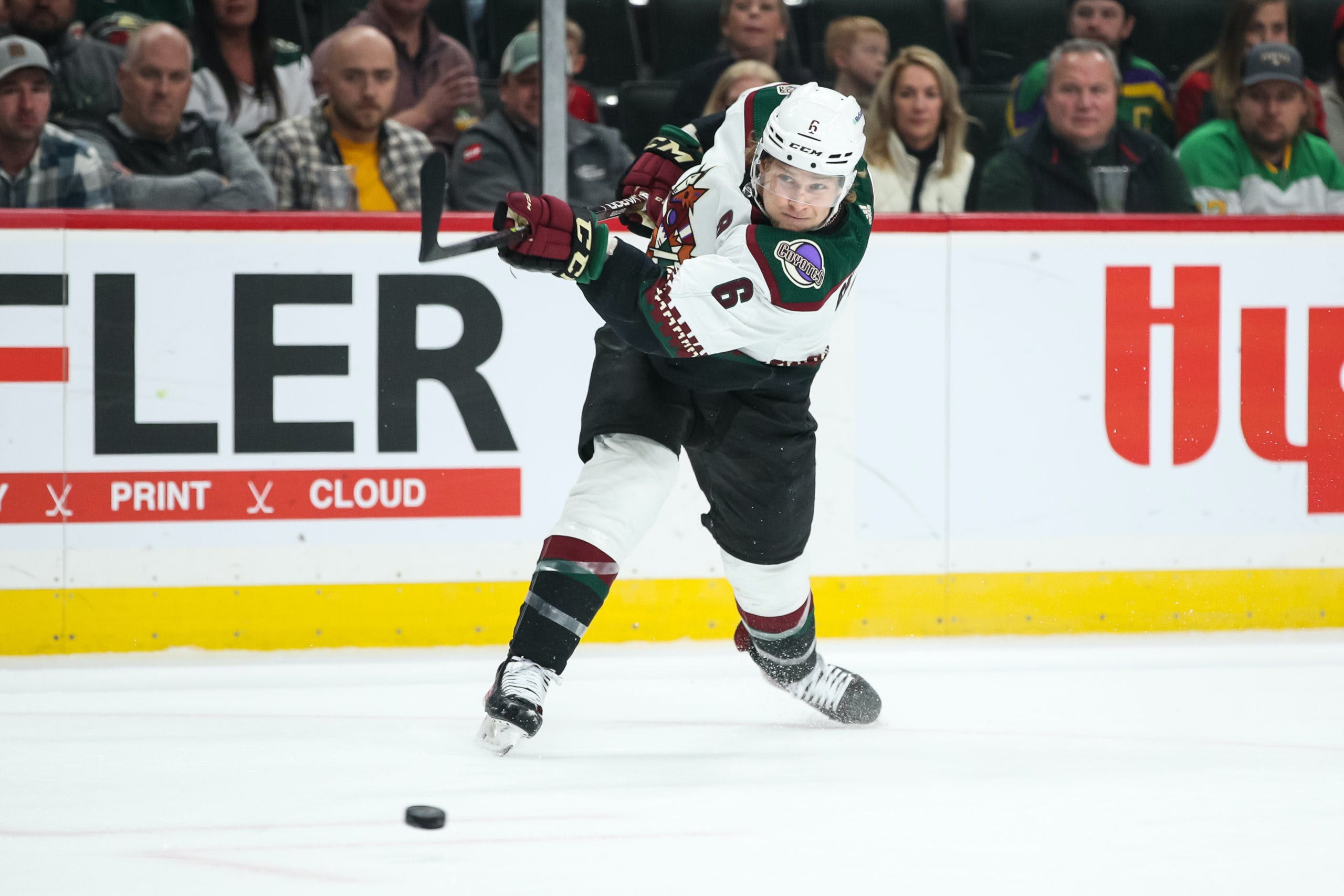 By Robin Brownlee
1 year ago
It’s no surprise there’s been plenty written and spoken about the availability of Arizona Coyotes’ defenceman Jakob Chychrun since Sportsnet commentator Elliotte Friedman speculated that GM Bill Armstrong was “gauging” what the market might be for him.
Likewise, it’s no stunner that many teams would be (and should be) interested in a quality, young defenceman like Chychrun if he’s actually available. At just 23, Chychrun already has more than 300 NHL games on his resume. He’s been playing big minutes for the Coyotes this season at an average of 24:50 per game.
On top of all of that, Chychrun is making a reasonable $4.6 million through 2023-24. I’m not even concerned about the hideous minus-29 stain of a stat he’s packing. He’s playing a lot of minutes on a team that’s lousy to the tune of a .241 points percentage and sits at minus-53 in goal differential. The kid is a player.
All that said, I’ve got questions. Like, is Chychrun a fit for the Oilers given who is on the blue line now and who is on the way? What is Armstrong asking for in a trade for Chychrun? Friedman described the ask as “massive.” How much is too much in terms of players going the other way in any trade? How do the Oilers fit in Chychrun’s $4.6 million cap hit based on contracts they have now and those coming up? 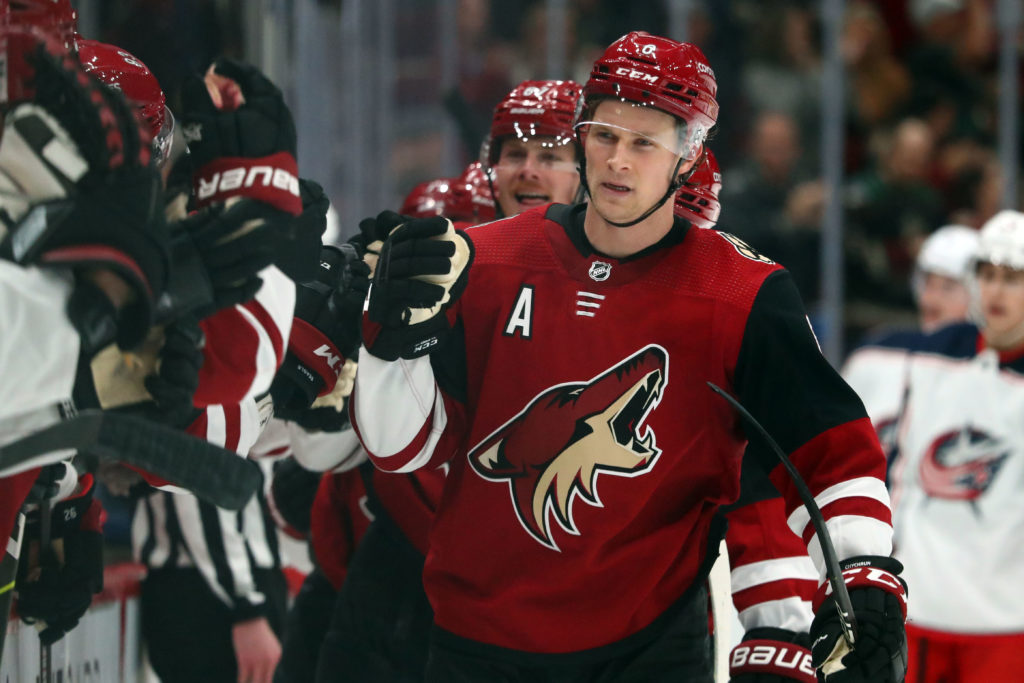 Nov 18, 2021; Glendale, Arizona, USA; Arizona Coyotes defenseman Jakob Chychrun (6) celebrates his goal scored against the Columbus Blue Jackets during the third period at Gila River Arena. Mandatory Credit: Mark J. Rebilas-USA TODAY Sports
Whether you’re running advanced stats on him, have eyes on him or both, there isn’t much not to like about Chychrun. If liking the player is all that matters, done deal. The reality is, not so fast. With Darnell Nurse set to make $9.25 million, Duncan Keith making $5.5 million for another year and Chychrun at $4.6 million, how could GM Ken Holland afford to pay the left side of his blueline $19.35 million?
The Oilers also have Markus Niemelainen and Philip Broberg on the left side, although Chychrun is a far better fit in the win-now mode the Oilers are entering. So, do you bump Keith down to third pairing at the money he’s making, albeit just through next season? It makes no sense to bury Chychrun in the third pairing. On Oilers Now on 630CHED today, Bob Stauffer and Mark Spector of Sportsnet batted around the question of Chychrun as a fit.
“It doesn’t make sense for me because I think the Oilers need to spend in other areas to improve the team,” Stauffer said. “And, I think they have some internal solutions. You know how much I believed in Evan Bouchard. I still believe in Evan Bouchard. In fact, I sit there on a nightly basis and wonder what would happen if Evan Bouchard was on Edmonton’s number one power play, but they signed (Tyson) Barrie for three years.
“In my opinion, three of Edmonton’s five best prospects are left-shot defencemen. Broberg, who is either the No. 1 or the No. 2 prospect, is having a good season in the AHL. (Dmitri) Samorukov and (Markus) Niemelainen has opened up some eyes with his unique skillset. Does Edmonton need to go get and bring in Jakob Chychrun?” 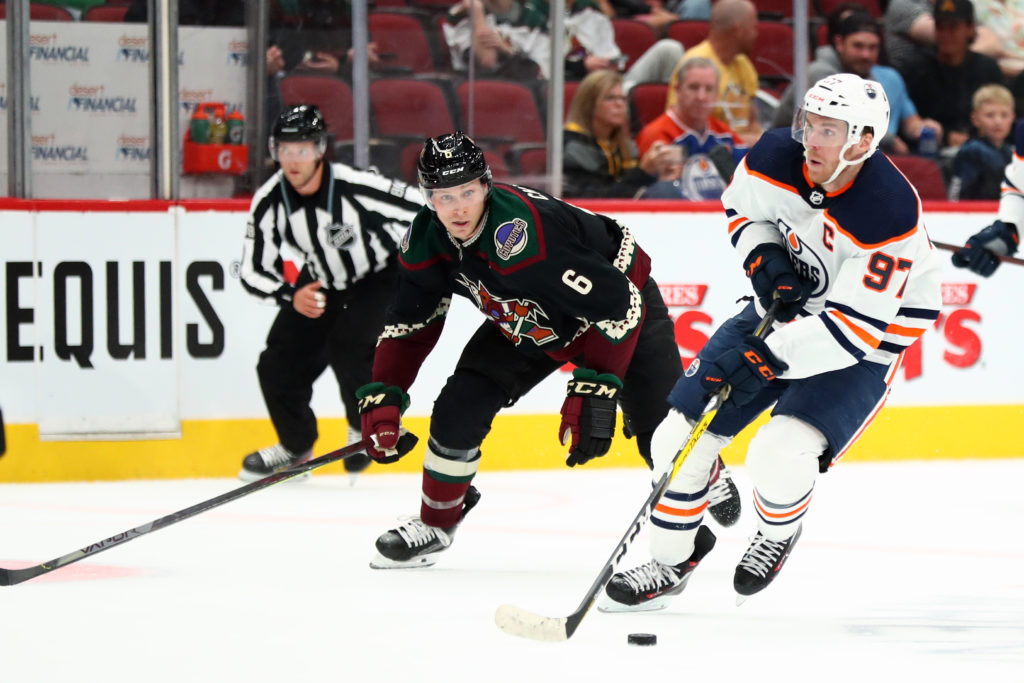 Oct 21, 2021; Glendale, Arizona, USA; Edmonton Oilers center Connor McDavid (97) skates with the puck in front go Arizona Coyotes defenseman Jakob Chychrun (6) during the second period at Gila River Arena. Mandatory Credit: Mark J. Rebilas-USA TODAY Sports
“The more important question is, do the Oilers need this player? In my opinion, absolutely not,” Spector said. “Listen, does he make you better? Yes, he’s a good player. Could you use him? Sure, but everything you’ve said is true. They’re stocked on defence, or as well-stocked as they need to be.
“Let’s make a list of the things this Oiler team needs right now. A third-line centre, a little bit of support scoring, a right winger for sure — hopefully, a top-six guy. I mean, a left defenceman, now that Niemelainen has shown he can play a little bit, it’s down the list. I might put goalie ahead of (left defenceman) because I don’t know where we’re at with Mike Smith. Who does?
“This is what I would say. Someone is going to empty the cupboard for this guy. Whatever Ken Holland has in his cupboard to move, to get a really good player at the deadline, he would spend all of that and maybe more on Jakob Chychrun and he’d still have all those holes up front. He still wouldn’t have the depth scoring he needs. He still wouldn’t have a proper third line. He still wouldn’t have the third-line centre he’s looking for.
“To me, I let somebody else empty their cupboard on Jakob Chychrun and then, when the trade deadline comes, I have all of those tools, the draft picks and prospects, to go and address the things I need in March, not something that I just would like. Jakob Chychrun is something I’d like. He’s not something I need.”

I’m with Spec. Chychrun is a player. I’d like to have him. Do I need to have him, given the roster as comprised today and what it would take to move players and money around to get a deal done? No. If Holland could wave a magic wand and retroactively have Chicago retain 25 per cent of Keith’s salary or undo the deal altogether, that might work. If this was NHL 21 on PS5 and we could sucker the system — send Kris Russell, William Lagesson and a second-rounder — to get it done, sure. This isn’t that.
One more question. With Chychrun being a young player at a reasonable price point with his best years ahead and Arizona trying to develop a group of core players, why is Armstrong willing to entertain offers?