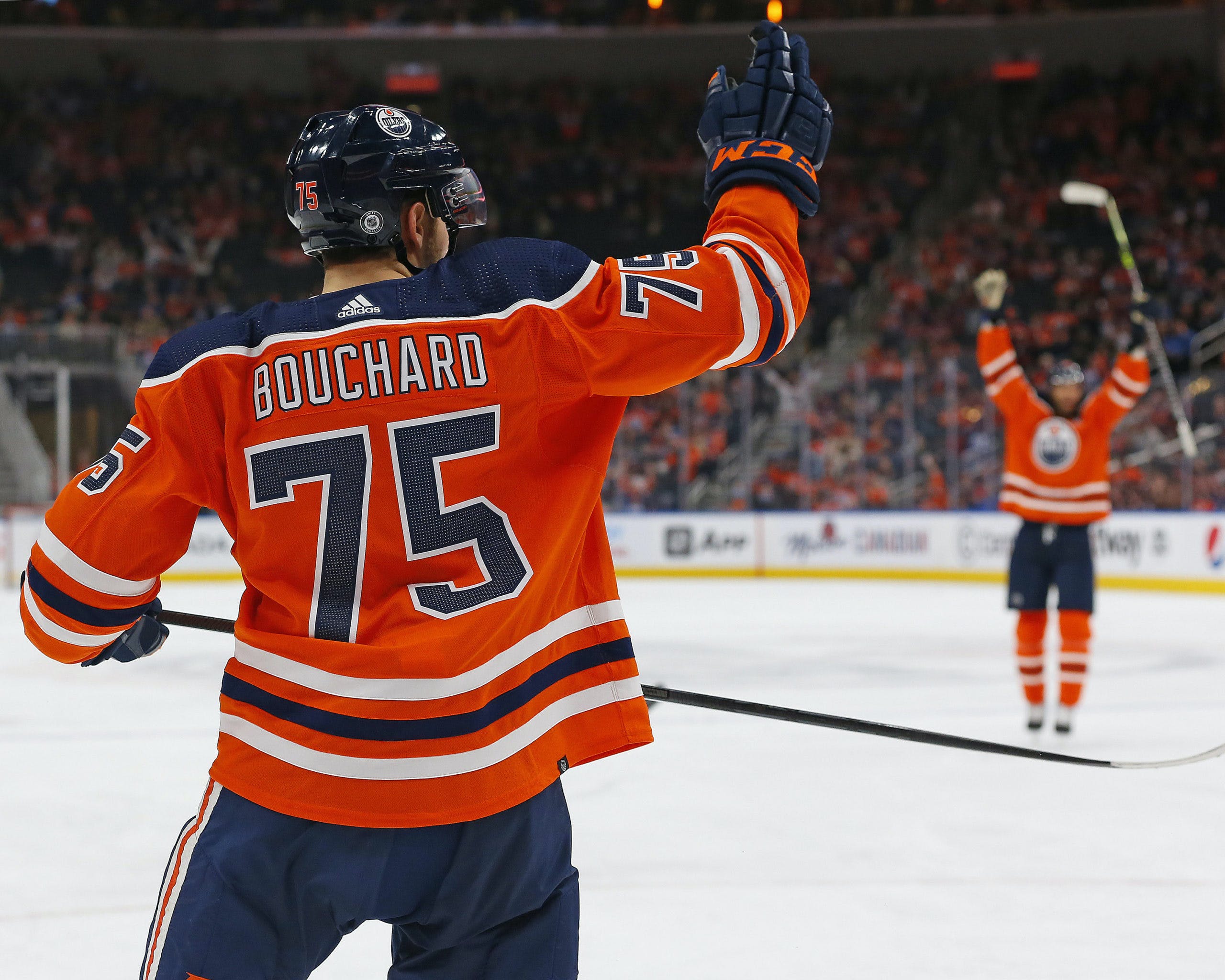 By Robin Brownlee
5 months ago
With Father’s Day coming up on Sunday, the time was right on Twitter this week to run that photo of Evan Bouchard easing into summer by relaxing in the back of a motorboat with Edmonton Oilers’ teammates Ryan McLeod and Warren Foegele.
I’d have preferred to see Bouchard at the controls while the youngsters on the boat kicked back, but that’s getting a bit picky and, after all, it’s just a play on the nickname “Dad,” given him by a segment of the Oilers fanbase – it might have been hatched right here at Oilersnation, actually.
The ongoing age gags work of course because Bouchard, who is 22, could easily pass for 35. All this we know, and the punchlines follow. The thing is, Bouchard, drafted in 2018, just spent his first full season in Oilers silks, playing 81 games and putting up 12-31-43 while playing just under 20 minutes a game (19:48). On most nights, he looked ready beyond his years.
When Bouchard got into seven games in 2018-19, the worry among some fans was he might be rushed along. We’d seen that a time or two before. By the time Bouchard got into 14 games for the 2020-21 season, he fit right in. Many observers felt he could have seen more playing time. He damn sure looks ready now. 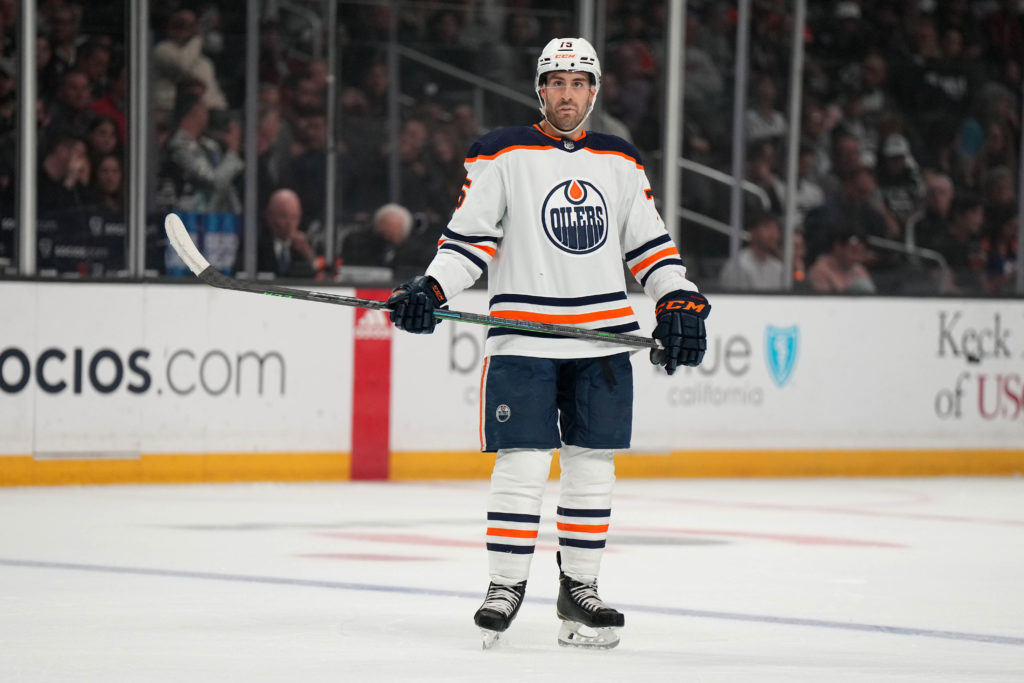 Apr 7, 2022; Los Angeles, California, USA; Edmonton Oilers defenseman Evan Bouchard (75) reacts against the LA Kings in the first period at Crypto.com Arena. Mandatory Credit: Kirby Lee-USA TODAY Sports
Much has been written about Bouchard along the way. As an aside, I wrote an item about him in February of 2021. It not only speaks to Bouchard’s journey, but how quickly names and circumstances can change. Just check the names in this snippet from that item.
“While there are bound to be bumps in the road along the way for Bouchard, he looks ready to make a case for staying in the line-up on a blue line that’s offering us a glimpse of the future today. With Bouchard, Ethan Bear, Caleb Jones and William Lagesson in the mix with Darnell Nurse, injured Oscar Klefbom, Adam Larsson, Tyson Barrie, Slater Koekkoek and Russell, the Oilers have options.” Ethan Bear, Caleb Jones and William Lagesson? Sure.
I liked the combination of Bouchard and Duncan Keith in the second half this season. While it can be argued how much of an impact Keith had on Bouchard at this point in what has been a HHoF career – it’s possible Keith will retire this summer – I liked them as a pair. Keith, meanwhile, liked what he saw in Bouchard.
“I know that when I played with him, I guess it would’ve been halfway through the year, I immediately thought he was a smart player and was easy to play with and easy to make reads off of,” Keith said. “I tried to get him the puck a lot to get his shot off, and I think everybody knows how hard his shot is.
“It’s tough as a young guy. You’re coming into the league and there are a lot of good players. The main thing you try to focus on is being good defensively. He’s already got his offensive game going pretty well. That’s only going to get better as he goes along, so nothing but great things to say about Evan and the year that he had and his future in Edmonton with the team.” 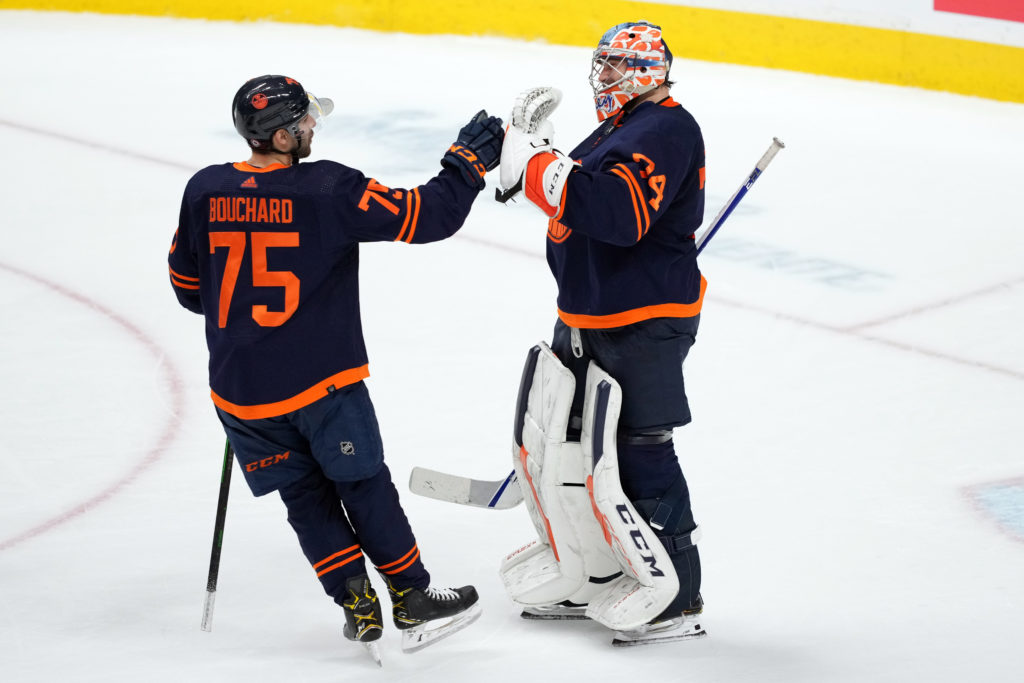 Feb 14, 2022; San Jose, California, USA; Edmonton Oilers goaltender Stuart Skinner (74) celebrates with defenseman Evan Bouchard (75) after the game against the San Jose Sharks at SAP Center at San Jose. Mandatory Credit: Darren Yamashita-USA TODAY Sports
Despite looking like he should be behind the wheel in a 1970’s advertisement about a Buick station wagon as big as an oil tanker, let’s not forget Bouchard is still a youngster by NHL standards. He has played just 102 NHL games and is a work in progress. There’s room for growth and to tighten up any holes in his game.
“Well, it’s a little different when you get someone like Duncs who has been through it all,” Bouchard said of playing with Keith. “He knows what he’s doing and the style of play he wants to play. The more you listen and the more you can take in, the better it’s going to make you and the pairing. The better the pairing does, it helps the team. The more you listen to him and pick his brain is going to help you out.”
We don’t know for sure if Keith will be back for his second season with the Oilers or if he’ll call it a career and retire in the Okanagan. Regardless of which way it goes, it looks from where I sit that Dad isn’t just on his way, he’s arrived.