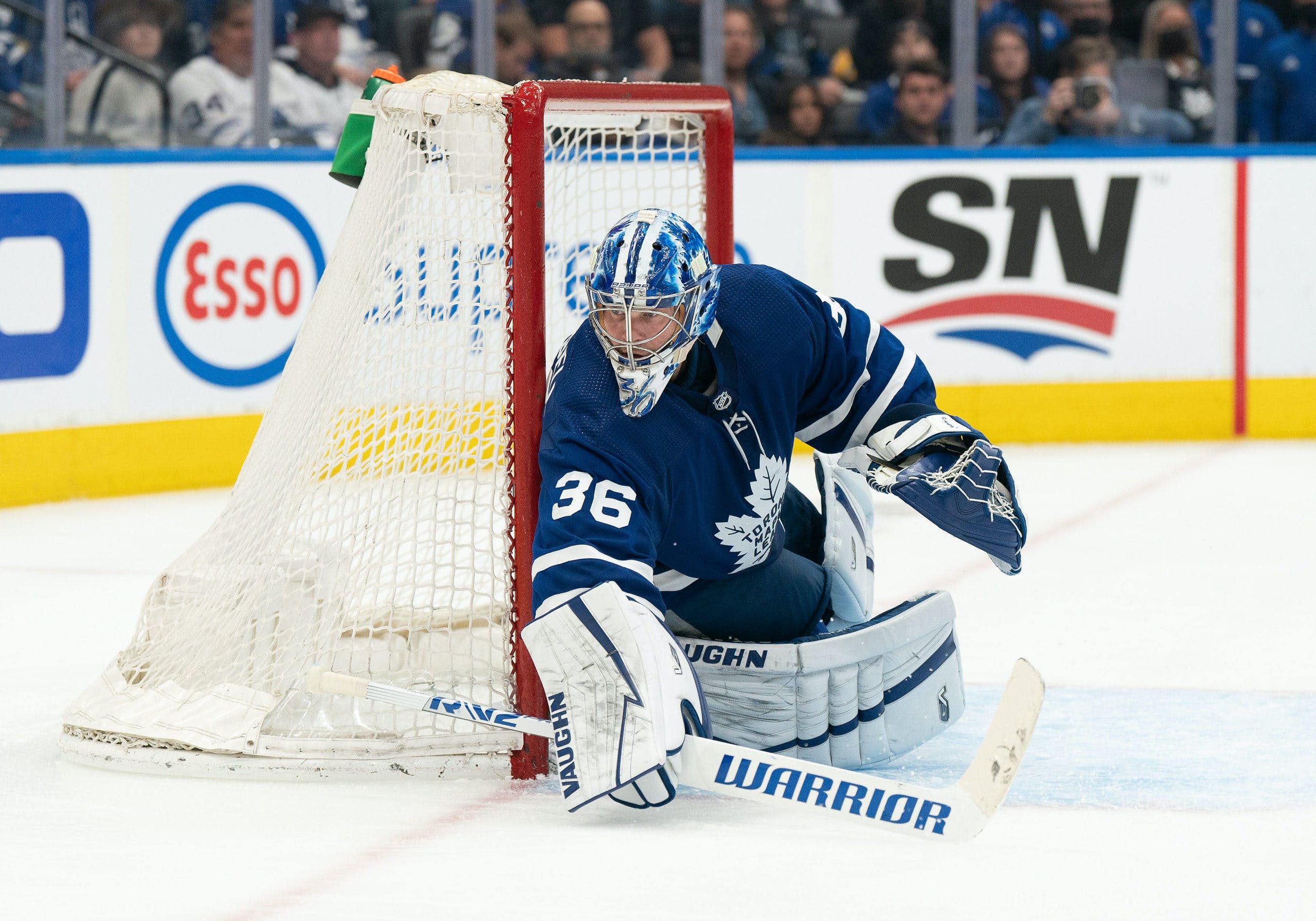 By Robin Brownlee
6 months ago
If the Edmonton Oilers are going to address their need for a goaltender with pending unrestricted free agent Jack Campbell in the next 24 hours or so, they’re going to have to pay him a little bit more than they’d like for a little bit longer than they’d like. That’s the reality of the UFA market.
If you’re of the mind that a $5 million AAV for five seasons — the range in money and term that’s widely being speculated about – is a bit too much or a bit too long for the 30-year-old stopper, that’s fair comment. Regarding the dollars, no question that’s a healthy bump from Campbell’s $1.65 million AAV of last season. Is he a slam-dunk? Is he as good as, say, Darcy Kuemper?
As for the term, what does five years for Campbell mean for Stuart Skinner, the 23-year-old who has been biding his time behind Mike Smith and Mikko Koskinen? Bringing in Campbell means Skinner goes from being a season or less from taking over the crease as the starter to what? Perpetual back-up? Fair question.
What I know after watching the Oilers’ goaltending situation in the seasons since Peter Chiarelli gifted Koskinen a three-year contract on his way out the door, and with the team having just reached the Western Conference final, is I’m willing to see how the questions play out. Campbell and Skinner as a tandem makes sense to me, questions and all. 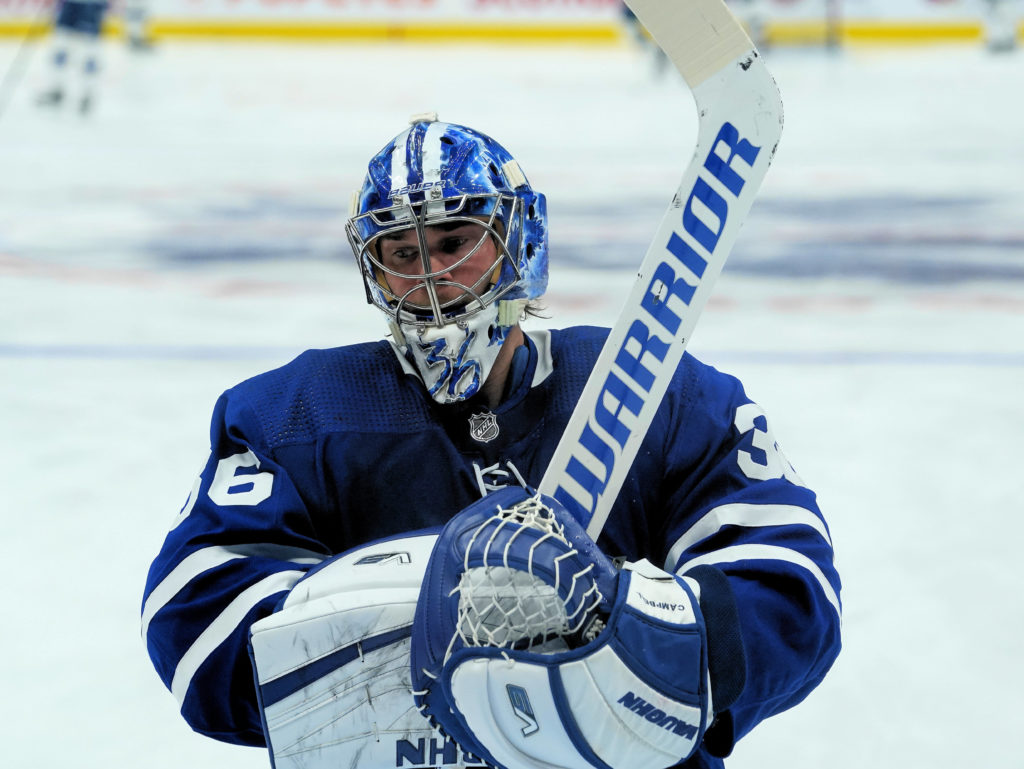 May 4, 2022; Toronto, Ontario, CAN; Toronto Maple Leafs goaltender Jack Campbell (36) during warm up of game two of the first round of the 2022 Stanley Cup Playoffs against the Tampa Bay Lightning at Scotiabank Arena. Mandatory Credit: John E. Sokolowski-USA TODAY Sports
GM Ken Holland’s to-do list doesn’t end at finding a goaltender to give his team a chance to build on the season the Oilers just put together, but it begins there. This is obvious to anybody who has been paying attention. We can debate whether Campbell is the best option available, but there’s no question the Oilers aren’t getting anything done without an upgrade in the blue paint.
“I need one,” Holland said at the Entry Draft in Montreal. “I’ve got to get one. It’s as simple as that. There are a lot of things we’d like to get done, but none of that can really be addressed until the goalie situation gets ironed out. That’s the focus.”
While Skinner, who went 6-6-0 with a 2.62 GAA and a .913 save percentage in 13 games last season, has shown plenty of promise, expecting him to take over the crease as the starter now is wishful thinking. We’ve seen enough of that around here, no?
“We’re pleased with the way Stuart has developed and played,” Holland said of Skinner last Friday. “But he’s the only goalie we’ve got right now, and at best, he’s a 1B.
“Again, I need a goalie. Some guys moved in trades today. Ville Husso went to Detroit. (Vitek) Vanecek went to New Jersey from Washington. Marc-Andre Fleury was re-signed by Minnesota. So, there’s a lot that went on. Whatever the case, we’ve got to get one.”

Relationships in hockey, like relationships in any line of work, have considerable sway when it comes to deciding where players decide to sign. Three current Oilers, Zach Hyman, Cody Ceci, and Tyson Barrie, were teammates of Campbell with the Maple Leafs in Toronto. Bet the farm there’s been a conversation or two about what playing and living here is all about.
When the UFA season opens at 10 a.m. our time Wednesday, I’ll be stunned if the Oilers and Campbell don’t have a deal in place, even if it isn’t perfect in dollars and term. It’s a smart bet. 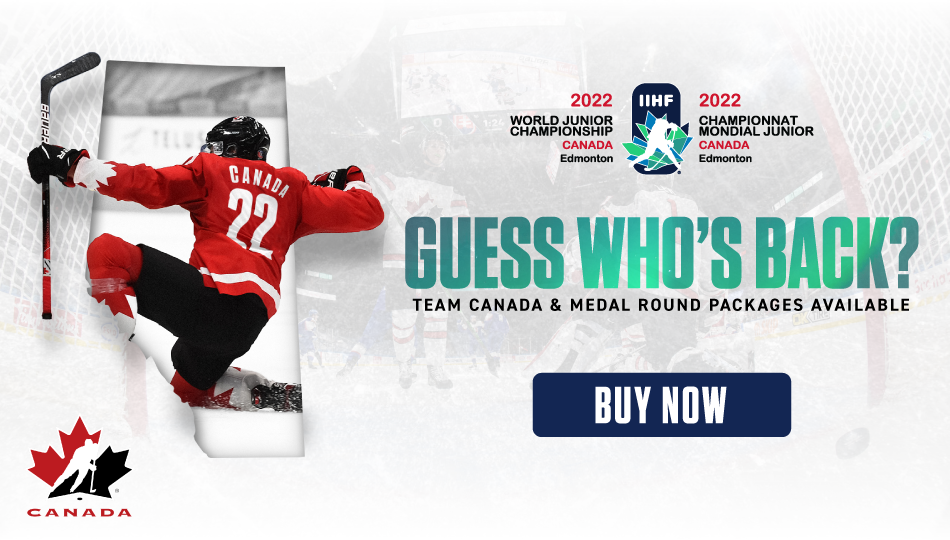