By Robin Brownlee
11 months ago
We’ve talked about the possibility of the Edmonton Oilers having an interest in Jake Debrusk before and we got another look at him last night as the Boston Bruins sent the Edmonton Oilers to their fourth straight defeat in a 3-2 decision.
With much discussion about what’s wrong with the Oilers and what changes might be made to shake things up, the Debrusk talk has been in full swing. Right on the mark, Debrusk scored the 2-0 goal for the Bruins – with his dad Louie working the microphone with Jack Michaels on the Sportsnet broadcast – setting tongues wagging even more. We know Jake wants out of Boston and has asked for a trade. Why not here, right?
I like the human aspect, the father and son story, involved in bringing Debrusk to back to the city where he was born and where the old man played and now works. When at his best, Debrusk has shown he can be an impact player. Still, I’m not sure bringing Jake to Edmonton at this stage in his career makes sense.
At 25, Debrusk hasn’t been the player he was in 2018-19 when he scored 27 goals. Not close. He’s overpaid for what he’s producing now. Some armchair general managers believe the Oilers could get him relatively cheap now. Fair comment. He could be a bargain. Maybe, but what is cheap if Debrusk can’t get it done anymore? 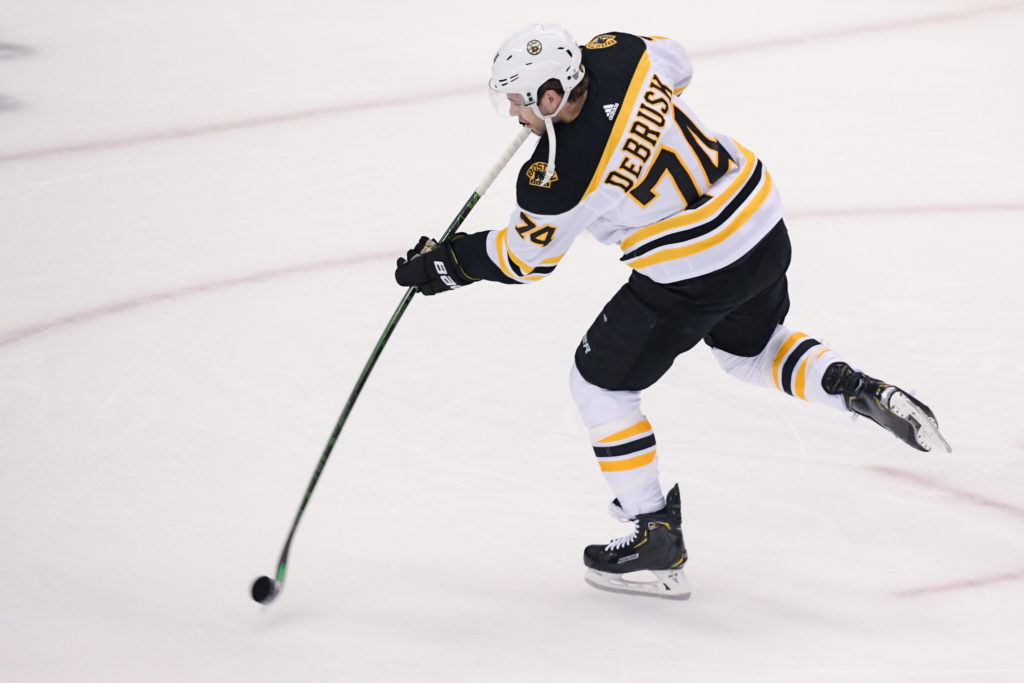 Aug 17, 2020; Toronto, Ontario, CAN; Boston Bruins left wing Jake DeBrusk (74) takes a shot during warmups prior to game four of the first round of the 2020 Stanley Cup Playoffs at Scotiabank Arena. Mandatory Credit: Dan Hamilton-USA TODAY Sports
One of the people I listen to when I want to know what’s going on with the Bruins is Joe Haggerty. He covered the Bruins for NBC Sports starting in 2009 and now works the beat for Boston Hockey Now. You and I can have our opinions on Debrusk, but we don’t have eyes on him like Haggerty does. Haggerty did a segment on Oilers Now with Bob Stauffer before the game Thursday. As always, he told it straight. The full interview is here.
“I think, having watched the player, he’s not the same player he was the first couple years in the league,” Haggerty said. “He doesn’t consistently go to the net as much or enough, like he used to. He doesn’t play with the same level of energy he did at one point. Certainly, he’s not developed as a two-way player and is not a factor in the game aside from when he’s shooting and scoring.
“He hasn’t really developed in any other facet. He doesn’t block shots. He doesn’t finish off checks ever. He does a lot of fly-bys on the forecheck. He’s got great speed and a great shot, but I think in a lot of other areas of his game he’s lacking most of the time. I think when the offence is going and when he’s scored some goals, some of that stuff comes back, but I don’t think it’s there consistently like it needs to be if you’re going to play a top-six role.
“Now, he’s getting to the point the last three years where there’s been healthy scratches, he’s been dropped to the third or fourth line at times, he’s had to play off-wing. There’s a lot of other stuff going on — where maybe it’s not always the ideal situation for him to be at his best or to play at his best. There was an expectation there that once he hit that 27-goal mark a couple years into the league, he was going to be a 20-goal scorer every year. He just has not been that.”
Haggerty recalled a play by Nazem Kadri of the Toronto Maple Leafs during the playoffs in 2019 — he was suspended for cross-checking — as a possible turning point for Debrusk. The play is here. “I don’t know that Jake has played the same way since that happened,” Haggerty said. “I think it’s understandable if there is a difference between before that and after that. I just don’t think he’s as tenacious a player anymore.
“I think it’s hurt his game. Maybe he gets in touch with that somewhere else. Maybe he just needs to hear a different voice to unlock his game, but I just don’t think we’ve seen the same player the last few years. A lot of what’s happened to him, he hasn’t earned power play time, top-six time, all the other stuff. He has to do that before it’s given to him.”

Having met Louie when he arrived in Edmonton from the London Knights in 1991-92 and knowing what a proud father he is when it comes to Jake and everything that he’s accomplished – if you saw Louie interviewing Jake at Rogers Place in February of 2020 you got a sense of it  – I’m convinced Jake wearing Oilers’ silks is a great story.
I’m just not convinced that it’s a smart hockey move for the Oilers given the circumstances as they are today.