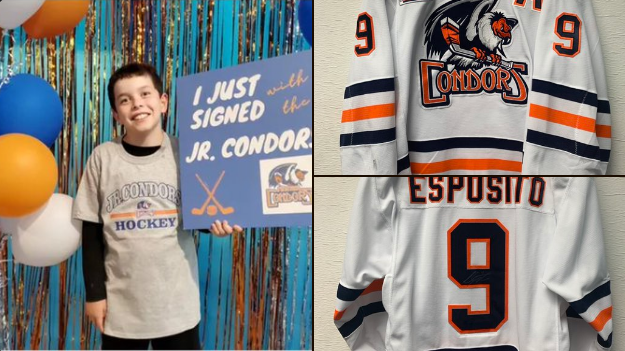 By Zach Laing
7 months ago
The Bakersfield Condors are raffling off a jersey in support of a local 12-year-old who recently suffered heart failure and is need of a heart transplant.
Adam Hurst has been a member of the Bakersfield Jr. Condors — a developmental program for youth hockey players in the area.
According to a GoFundMe in his support, Hurst underwent successful surgery in late May to place a heart pump in his chest, but is in need of a heart donation.
The Bakersfield Condors, meanwhile, are raffling off a signed Luke Esposito jersey to help raise funds for Hurst. Esposito, 28, appeared in 63 games for the Condors last year scoring eight goals and 25 points.
Single raffle tickets can be purchased for $10, while you can get three for $20 here. The raffle ends on Thursday, June 23rd.
Zach Laing is the Nation Network’s news director and senior columnist. He can be followed on Twitter at @zjlaing, or reached by email at zach@oilersnation.com.
Nation Takes
News
Oilers Talk
Recent articles from Zach Laing