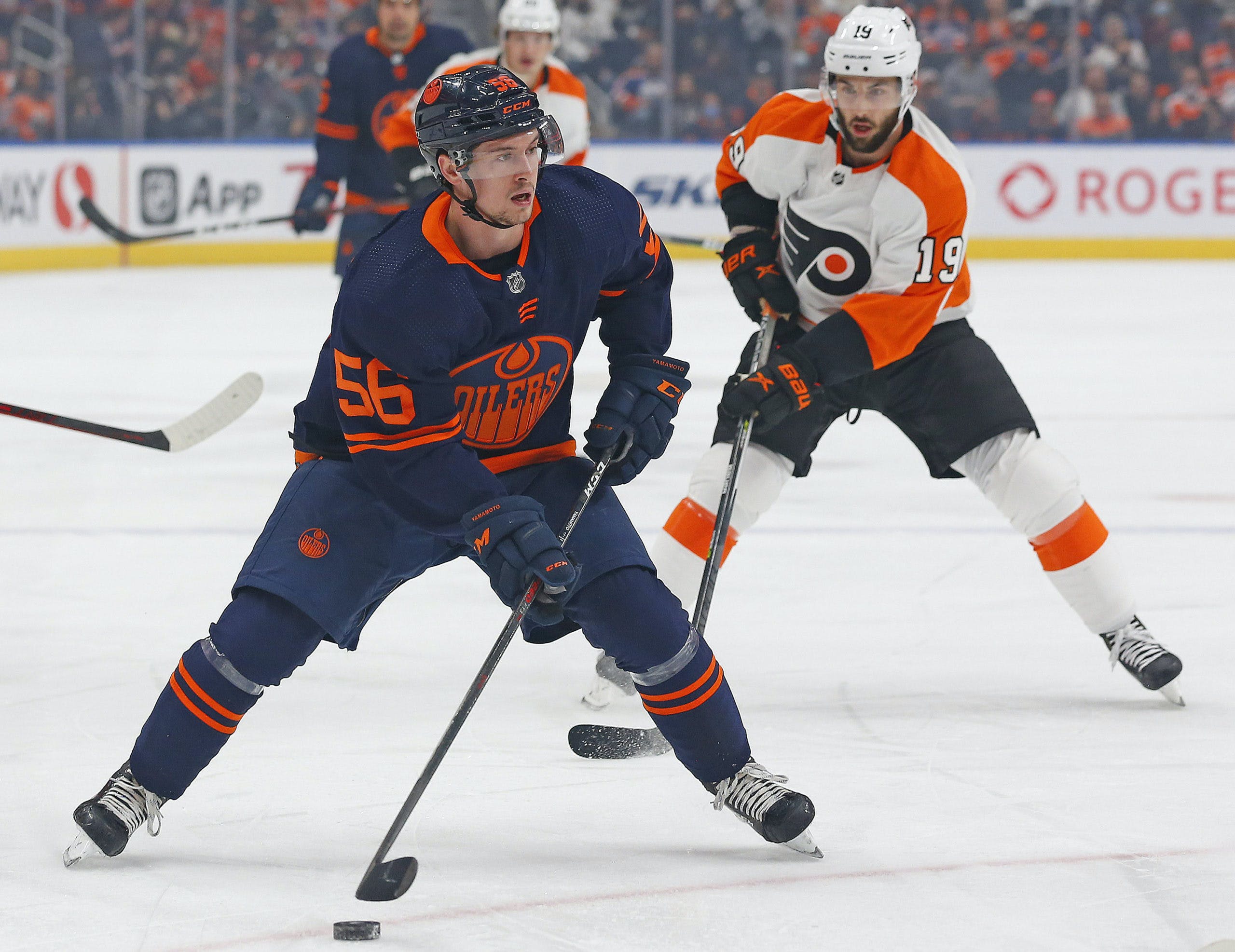 By NHL_Sid
1 year ago
With a record of 5-1-0, the Edmonton Oilers have had an exceptional start to the season thus far. Numerous things have gone well for them, such as Connor McDavid’s electric yet not surprising start, Zach Hyman’s goal per game pace, and at long last, the emergence of a competent third line.
However, one of the few concerns has been Kailer Yamamoto’s individual play.
Yamamoto was signed to a one-year contract with an AAV of $1.175M in September. But so far, he’s yet to record a single point in six games and has had extremely average play-driving and possession metrics. From a statistical standpoint, it seems to be a continuation of his play from the prior season, as he had just 4 goals in his final 43 games in 20-21.
Many will recall how Yamamoto was a key factor as to how the Oilers bounced back after a dreadful December in 2019 to qualify for the playoffs. He primarily played alongside Leon Draisaitl and Ryan Nugent-Hopkins, and this trio had a 77% goal share (1st in the league for lines with at least 300 minutes that year) and a 56% expected goal share that season. Individually, Yamamoto finished with 26 points in 27 games; nearly a point per game pace.
However, his play as of recent has not resembled his dominant play two seasons ago. Yamamoto’s individual finishing and production have seen a sizable decline since his breakout year. In this piece, I’ll be breaking down the extent to which Yamamoto has struggled, both in 20-21 and in the first few games of the ongoing season. Additionally, I’ll also dive into the reasoning behind his current play.
*All stats are via Natural Stat Trick unless stated otherwise

Can we simply narrow Yamamoto’s play down to some bad luck?

As stated before, Yamamoto had an excellent campaign in 19-20. When it came to even-strength Points/60, he was third in the league that year, and finished with a higher 5v5 goal differential than any other Oilers player. His results were undeniably impressive.
This is where the aspect of luck comes in. For those who don’t know, the statistic PDO calculates the sum of a player’s on-ice shooting% and a player’s on-ice save percentage. The purpose of this stat is to try to get an idea of if a player’s results are the cause of an unsustainable on-ice shooting% and/or save%. A PDO below 1.00 is generally considered unlucky most of the time, while a PDO above ~1.01-1.02 usually means the player has had numerous bounces go their way.
In this case, Yamamoto led the team in this column in 19-20, with an incredibly lofty 1.071 PDO. Additionally, Yamamoto had a 25% SH% at all-strengths; put differently, he was scoring a goal on every 4th shot.
He was still prominent when it came to expected goal share, but it was clear this level of production would not sustain. Many projected him in the top 6 and predicted he would still perform well the next year (including me), but not at this pace.
Fast-forward to 2021, and his point totals did indeed drop considerably. However, it was a more substantial decline than most expected. Yamamoto produced a 3.16 5v5 P/60. In 20-21, it dropped to 1.28. His production rate in 19-20 was nearly 2.5x higher. So, was his play the following year simply a mirror of 19-20? Was he unlucky this time?
The answer is no. In 20-21, in spite of producing 4 goals in his final 43 games like stated before, Yamamoto still finished 7th on the team in 5v5 SH%, which is hard to refer to as unlucky. To add on, his PDO was at 1.018, which means if anything, he still had a fair share of luck on his side. He especially obtained some defensive fortune in 20-21; Edmonton’s goalies had a 0.934 SV% with him on-ice.
It’s a limited sample size, but during his six games in 21-22, Yamamoto still has a PDO of 1.013. From an “eye test” perspective, I feel that he’s been inconsistent. Offensively, he’s displayed occasional flashes of his 19-20 self, especially in his game against Vegas. However, there’s still been numerous shifts where he’s been nearly unnoticeable. I feel that he’s been fine defensively though (this is reinforced by how Yamamoto’s scoring chance suppression metrics have been top 5 on Edmonton), but his equally uninfluential offence is a concern.
Going beyond just his on-ice shooting% and save%, here’s a breakdown of his finishing in his last 3 seasons:

He’s begun shooting at a more rapid and higher rate this season, but the quality of his shots has reduced, as seen by the decrease in his high danger shots. His shot quality in 19-20 and 20-21 were pretty similar, but Yamamoto was simply regressing to the mean in the 20-21, as his Goals/60 and xGoals/60 gradually became very close.
Yamamoto has finished less than expected in his small stints in 17-18 and 18-19, along with the 20-21 season and the current season thus far. 19-20 currently remains the lone exception, and it was amid a year in which he went on a SH% heater. Consequently, perhaps Yamamoto simply isn’t that great of a finisher.
All things considered, I think it’s fair to say bad fortune is not the primary reason behind Yamamoto’s struggles. Even if he was quite fortunate, from both an eye test and scoring chance-wise perspective, he was by far at his best in 19-20. He earned those bounces that season, as opposed to his other campaigns. I don’t feel bad luck is the cause of his recent play, but what about his deployment?

In his past 3 seasons, Yamamoto has played in a very significant role. He’s frequently deployed against tough opposition. However, he’s also obtaining desirable zone start deployment (although he’s strangely had quite a lot of defensive zone starts this season) and has been consistently deployed alongside Edmonton’s top players (most notably, Leon Draisaitl) in each of the past 3 years.
Diving more specifically into the exact lines that Yamamoto was deployed on, the trio of Kahun – Draisaitl – Yamamoto struggled to a large extent in 20-21 as opposed to the “DRY” line in 19-20. The former controlled just 44% of the on-ice expected goals, and just 41% of the on-ice scoring chances. In my opinion, I feel that this was a result of Yamamoto and Kahun simply not possessing chemistry together.
Kahun and Yamamoto are small, forechecking complimentary wingers who struggle to sustain a continued cycle in the offensive zone. Their lack of chemistry as a duo was pretty clear. This is reflected in Yamamoto’s microstats; per Corey Sznajder (@ShutdownLine on Twitter, he manually tracks microstats and I’d highly recommend checking out his work), Yamamoto moved from 3rd on the Oilers in Recovered Dump-Ins/60 in 19-20 (1st among Edmonton’s top 6 forwards), to 9th in 20-21.
Kahun and Yamomoto’s play styles just didn’t compliment each other, and it resulted in both of them performing weaker on the forecheck. In my opinion, both Kahun and (especially) Yamamoto are considerably more effective when utilized as a third wheel on a line. This assists in explaining why Yamamoto’s best results have come with the “DRY” line.
A huge reason for why that trio was such a success, most notably in 19-20, was due to how Yamamoto was so successful at his tenacious, forechecking style. He excelled in retrieving pucks for Draisaitl and RNH. Yamamoto doesn’t work as well as a primary play-driver on a line or alongside another aggressive forechecker, but more as a support/complementary player for two strong shooters.
Even if his production doesn’t display it, his play has improved when deployed on the DRY line. Per EvolvingHockey, Yamamoto had a 0% GF% (goal differential) and 49% xGF% (expected goal differential) in his first 3 games, playing primarily alongside Hyman and RNH. In his last 3 games alongside Draisaitl and RNH, Yamamoto put up a 100% GF% and 55% xGF%, as the 2nd line is gradually beginning to rekindle their dynamic chemistry.
Personally, I thought Yamamoto’s best performance so far this season came against Vegas. He was aggressive and was constantly engaged in puck battles. Although he didn’t obtain a point on it, he was a big factor on Draisaitl’s first goal.
Consequently, I think it’s fair to deduce that at this stage of his career, Yamamoto isn’t a strong play-driver. It’s debatable if he’s a bonafide top-six player either (although that could very well change). However, that doesn’t mean he shouldn’t be deployed in the top six at all, as he performs best when deployed as a 3rd wheel or support player alongside two strong shooters. His play dwindles when alongside a player whose strength is also his forechecking abilities, but he can thrive as a top 6 complementary player. He has the potential to become even more if he can work on his shot.

How about Warren Foegele on the 2nd line?

Some have pondered about the possibility of deploying Warren Foegele on the 2nd line, as he did spend significant time as a RW in Carolina.
In spite of a poor game against Philadelphia, the 3rd line of Foegele, Ryan and Kassian have been superb so far. Therefore, one could argue that removing Foegele from that line, and subsequently messing with the chemistry on the 3rd line isn’t the smartest of ideas. Swapping Yamamoto and Foegele would also result in one of Yamamoto or Kassian becoming forced to play on their off-wing.
At the same time, there is a chance that Foegele could complement Draisaitl and RNH on the 2nd line than Yamamoto. Foegele’s value also comes from his aggressive forechecking, and in fact, per Corey Szjadner, Foegele’s forechecking microstats have also been superior to Yamamoto’s.
In 20-21, Foegele’s Recovered Dump-ins/60 was 6.7, and his Forecheck Shots/60 was 12.2. Yamamoto was at 3.4 and 5.4, respectively.
To add on, Foegele drives scoring chances at a much higher rate. However, the main issue with Foegele is that his finishing metrics (relative to the chances he’s getting) have been inferior to Yamamoto’s in each of the prior two years. Subsequently, there are numerous advantages and disadvantages to playing either in the top 6. Both should obtain opportunities and spend a reasonable amount of ice time in the top 6. 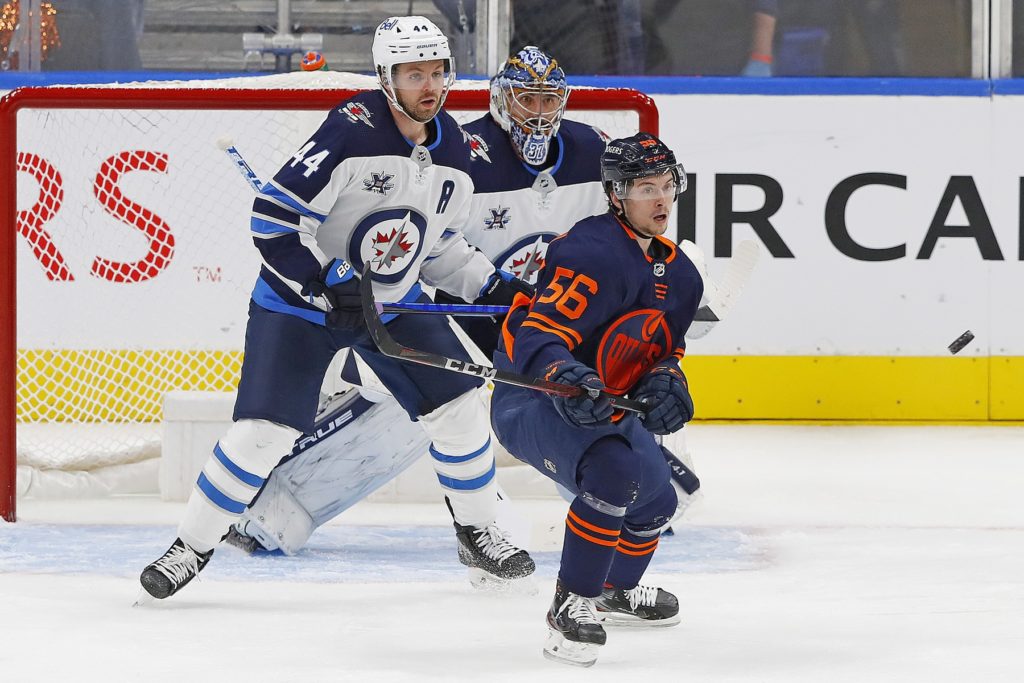 May 19, 2021; Edmonton, Alberta, CAN; Edmonton Oilers forward Kailer Yamamoto (56) and Winnipeg Jets defensemen Josh Morrissey (44) follow a loose puck during the second period in game one of the first round of the 2021 Stanley Cup Playoffs at Rogers Place. Mandatory Credit: Perry Nelson-USA TODAY Sports
As of now, the top two forward lines haven’t been an issue or hindrance at all, and in fact, they’ve been the primary driving force behind Edmonton’s success. I guess you could revert to the saying of “If it ain’t broke, don’t fix it.”
Even if Foegele does deserve at least some form of opportunity in the top 6 at some point, maybe that time isn’t now. The “DRY” line has been excellent in their past 3 games. Perhaps splitting them up now isn’t the best idea.
In spite of his offensive struggles, I’d still give Yamamoto an extended look for a longer stretch of games on the 2nd line. It’s most likely the most preferable role for Yamamoto to be deployed in; as a complementary player whose primary role is to generate chances off the forecheck and recover the puck for Draisaitl and RNH. If this role sustains, I feel that his production will gradually come. What are your thoughts on Yamamoto’s play?