Can Dylan Holloway and Philip Broberg make an impact with the Oilers in 2022-23? 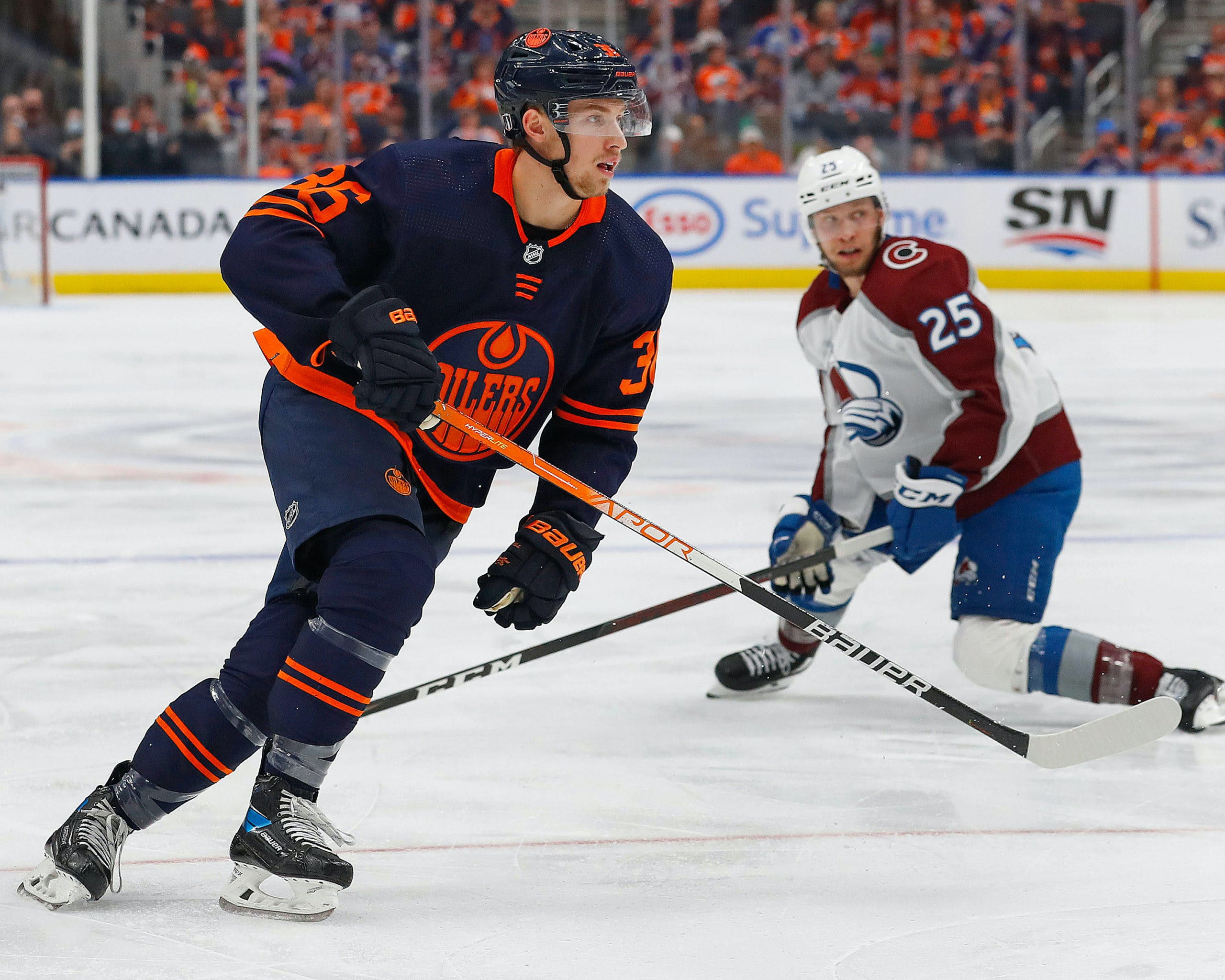 By NHL_Sid
4 months ago
The Edmonton Oilers could have a rookie at each position in their 2022-23 opening lineup; Stuart Skinner in net, Philip Broberg at defence, and Dylan Holloway at forward.
Skinner is a lock to be Edmonton’s backup goaltender behind Jack Campbell, but the bigger questions lie with Broberg and Holloway.
Drafted 8th overall in 2019, Broberg was Ken Holland’s first draft pick with the Edmonton Oilers. The Swedish defenceman was drafted out of the AllSvenskan league, and was praised by numerous scouts for his exceptional skating abilities. It was a decision that’s been heavily debated amongst the Oilers fanbase, as Edmonton chose Broberg over players such as Trevor Zegras and Cole Caufield, who are currently regulars in the NHL.
Calgary native Dylan Holloway was drafted 14th overall in 2020 out of the NCAA and was praised by scouts for his strong two-way game and transitional abilities.
As training camp and the NHL preseason draws closer and closer, there are several questions that must be answered; are Broberg and Holloway ready to be full-time players in the NHL? Where should they potentially play in the lineup? Can they make an impact for a contending team that aims to build off their conference finals appearance?
*All NHL microstats via Corey Sznajder, all prospect goal differential and production totals via Pick224 unless stated otherwise

Dylan Holloway’s career thus far, and where he could play 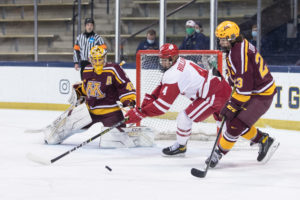 March 16, 2021; South Bend, IN, USA; Minnesota Golden Gophers goaltender Jack LaFontaine (45) makes a save as Wisconsin Badgers forward Dylan Holloway (4) looks for a rebound during the Big Ten hockey tournament championship game at Compton Family Ice Arena. Mandatory Credit: John Mersits/South Bend Tribune via USA TODAY NETWORK
After being drafted in 2020, Holloway played with the University of Wisconsin in 2020-21. With 35 points in 23 games, Holloway ranked fifth in the league in primary even-strength points per hour. Wisconsin out-scored the opposition at a ratio of 24 – 13 with Holloway on-ice at even-strength, equating to an excellent goal differential of 65%.
Some of Holloway’s most significant strengths include his transitional skills, elite skating, and overall, his ability to efficiently move the puck, often with creativity.
Holloway’s turnover rate was quite low, and in his draft year, Holloway’s transition efficiency score ranked higher than several other notable NCAA players in their draft years, such as Trevor Zegras and Cole Caufield (per Mitchell Brown). His zone entry success rate ranked at a superb 96.0% (per Iceberg Sports).
Unfortunately, Holloway dealt with considerable wrist issues in 2021. He underwent surgery to repair a scaphoid bone fracture in his wrist in March of 2021, and then had a second wrist surgery on September 14, 2021, before finally playing with Bakersfield in January of 2022.

*Note: People with access to private / proprietary data have given me a peek at Bakersfield’s xGF% results, which is how I obtained Holloway’s xGF% data
At a raw glance, his AHL results seem somewhat unimpressive. The Condors were outscored with Holloway on the ice at even strength, and his production totals were nothing spectacular, as he produced 22 points in 33 games.
However, Holloway’s wrist issues likely played somewhat of a role. Furthermore, Holloway experienced some poor luck, as he ranked first among all Bakersfield forwards in expected goal differential. He was excellent at driving play, and was more valuable than his raw production totals suggest. If he played another full season in the AHL, it’s an extremely high chance that his production / GF% results would regress to the mean.
Holloway played his first NHL game in the 2021-22 playoffs, against the Colorado Avalanche in Game 4 of the Western Conference Finals. Holloway was projected to start on the second line with Nugent-Hopkins and Hyman, but he wound up playing just 3:27, primarily on the fourth line.
Heading into 2022-23, Holloway must play in the top twelve every night, or he’ll be sent down to Bakersfield. Ken Holland has stated that he wants to see Holloway regularly play, whether it’s in the NHL or the AHL.
I feel that Holloway should start the season in the top-nine. Kane will be Edmonton’s top LW, one of RNH / McLeod will be 2LW (as Hyman will switch to RW), while Foegele, Janmark, and Holloway will compete at left-wing in the bottom-six.
I believe Foegele can bounce back this season, and he possesses the ability to be a perfectly capable third-liner, but it’s more important for Holloway to play in those minutes over both Foegele and Janmark.
Regardless of if he plays with RNH or McLeod at 3C, Yamamoto or Puljujarvi at 3RW, or even 2LW with Draisaitl, I feel it’s important for him to obtain an opportunity with some skill in the top-nine before sending him down to Bakersfield.
It places him in a more comfortable and ideal role where Edmonton could view what he’s currently capable of, and what he could potentially offer at the NHL level. It would be a waste to play Holloway on the fourth line where he’d struggle to hit double-digits in TOI, and it’s certainly not deploying him in a position to succeed.
I would rather play Holloway top minutes on the first line in Bakersfield as opposed to playing him limited minutes on the fourth-line with Edmonton, but an opportunity in the top-nine with Edmonton would be preferable to both.
Something to note; although it’s still possible that he plays the bulk of the season in Bakersfield, Holloway will likely start on Edmonton’s opening roster due to cap purposes. According to PuckPedia here, with Broberg on the roster, Holloway’s cap-hit would be his AAV including performance bonuses if he were recalled mid-season, equating to a $1.44M cap-hit. Meanwhile, if Edmonton had Holloway on the opening roster, his cap-hit would be $925K. Some food for thought.

Philip Broberg’s career thus far, and where he could play 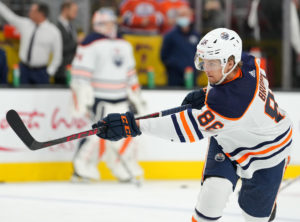 Nov 27, 2021; Las Vegas, Nevada, USA;Edmonton Oilers defenseman Philip Broberg (86) warms up before a game against the Vegas Golden Knights at T-Mobile Arena. Mandatory Credit: Stephen R. Sylvanie-USA TODAY Sports
After his draft in 2019, Broberg played 45 games with the Skellefteå AIK of the SHL (Swedish Hockey League). His possession metrics were quite good, as he posted a 54 CF%, and 54 FF% (per the SHL website). Similar to Holloway, Broberg’s transition metrics were excellent, largely due to his prominent skating abilities. Broberg’s controlled zone entries per hour ranked higher than 89% of the league, and his controlled zone exits per hour ranked higher than 97% of the league (per Finlay Sherratt).
He continued to play with Skellefteå in 2020-21, playing a total of 44 games. His possession metrics remained strong with a slightly higher 55 CF% and 56 FF%, and his TOI and role also increased.
In 2021-22, Broberg alternated between Edmonton and Bakersfield’s roster. He played 31 games with Bakersfield and 23 regular-season games with Edmonton.
In the AHL, Broberg was excellent. He led all Bakersfield defencemen with a marvelous 63% expected goal differential and 66% goal differential.
With Edmonton in the NHL, the sample size is obviously quite limited, and certainly not large enough to make entirely accurate conclusions. Broberg played 89 minutes with Ceci, 53 minutes with Barrie, 37 minutes with Bouchard, and 30 minutes at RD with Keith. His best results came with Bouchard, but his overall on-ice results were OK.
An encouraging thing to note in Broberg’s limited sample is that he ranked first among Oilers defencemen in controlled entry% and shot assists off the rush per 60. However, he did struggle at defending the rush, ranking last in entry denial%.
It’s nearly a guarantee that Broberg will begin the 2022-23 season at 3LD. On OilersNow several weeks back, Holland stated that Broberg will be an NHL regular unless he “plays his way off the team.”
About a week back, the Oilers signed defenceman Ryan Murray, who’s projected to be Edmonton’s seventh defenceman. In Daniel Nugent-Bowman’s piece on Thursday, a team source mentioned to him that Murray is “insurance” for Broberg, in the scenario that he’s not entirely ready.
Broberg is projected to start the season with Tyson Barrie, which could be a poor idea in my opinion.
The majority of rookie defencemen tend to struggle in their own zone early in their careers. It would be best to deploy them with a strong defensive player, something that Barrie certainly isn’t. Broberg’s progression will heavily rely on his defensive partners, and deploying him with Barrie could handcuff Broberg’s development.
Edmonton’s best defensive RD by a significant margin is Cody Ceci, who could be Broberg’s best option for a reliable defensive partner. However, it would result in splitting up Nurse – Ceci, a pairing that was phenomenal under Woodcroft.
Bouchard struggled defensively in 2021-22, and a pair consisting of him and Broberg will likely face struggles in their own zone, but it is a superior option to deploying him with Barrie.

Expectations for Holloway and Broberg, and what sort of impact they could make 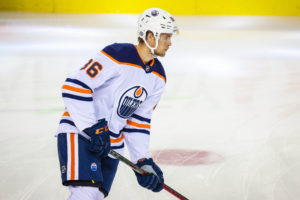 Sep 26, 2021; Calgary, Alberta, CAN; Edmonton Oilers defenseman Philip Broberg (86) skates during the warmup period against the Calgary Flames at Scotiabank Saddledome. Mandatory Credit: Sergei Belski-USA TODAY Sports
So far, Broberg is on a similar trajectory to Oscar Klefbom, who was drafted 19th overall in 2011.
Both played their first two seasons in Sweden after being drafted. In their DY+3 year, both rotated between the AHL and NHL. Broberg played 23 NHL games and 31 AHL games, while Klefbom played 17 NHL games and 48 AHL games.
In his DY+4 season, after 9 AHL games, Klefbom played 60 NHL games, where he averaged nearly 22 TOI/GP.
What should we expect from Broberg in his DY+4 season? By the end of the season, I think Broberg should be challenging Brett Kulak for the second-pairing LD role.
Ken Holland made a risky decision by selecting Broberg over players such as Trevor Zegras, Cole Caufield, and Matthew Boldy. All of them have already proven to be regular NHL players, and are beginning to emerge into significant pieces for their respective teams.
Patience is certainly needed for young defencemen, but it’s an extremely fair expectation for a top-ten draft pick to develop into a fairly good NHL player near the later stages of their DY+4 year. I also think it’s an achievable expectation for him.
Broberg has posted excellent underlying metrics in the AHL and SHL, and he certainly wasn’t bad in his limited NHL sample. I do think Broberg can emerge into a strong NHL player this season, although it will be impacted by who he plays with, as mentioned above.
As for Holloway, there’s a very good opportunity that he ends up playing considerable time in the AHL. However, I feel that there is a solid chance that he emerges into a fine NHL third-liner, with an outside chance of regularly playing 2LW with Draisaitl near the end of the season. Holloway could likely be a full-time top-six player at some point in 2023-24.
With the team in a tight cap-situation, it could be perfect timing for players on ELCs like Broberg and Holloway to make an impact. Only time will tell if they do.
What are your expectations of Broberg and Holloway? How do you think they should be deployed, and do you think they can be impact players this season?
Find me on Twitter (@NHL_Sid)
Nation Takes
Oilers Talk
Recent articles from NHL_Sid