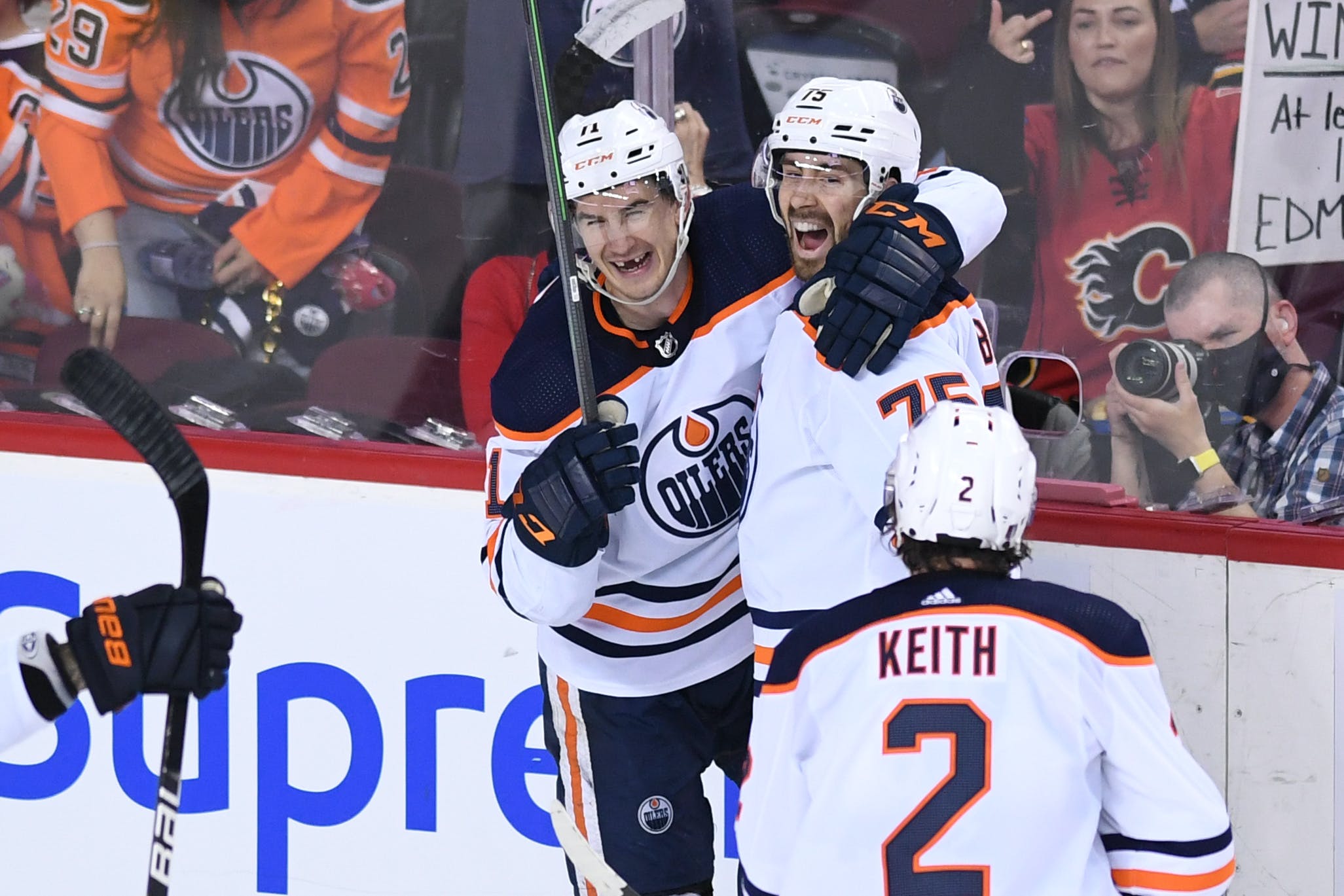 By Zach Laing
6 months ago
Now that’s a sweet, sweet La Bamba.
The Oilers faced more than their fair share of adversity but fought back all night long to launch an impressive 5-3 come from behind win.
Onto game three…

On McDavid: “He’s the best player in the world. He’s pushing himself and I’ve said it before. When you’re the best, it’s easy to be comfortable because guys are chasing you, but it’s hard to keep pushing, keep challenging yourself. He’s a guy who wants to win more than anybody, so you’re seeing him push himself, push our team, and those are the results.”
On what the Oilers can do if McDavid keeps it up: “Like I said, you have to stay off the rollercoaster. When you win a game, you’re feeling great. When you lose a game, you’re feeling terrible. It’s easier to prepare when you lose, because you don’t want to have that feeling. When you win, you got to reset and have that hunger that you don’t want to lose. I think for us, and for Connor, he just stays even keel. Nothing phases him. He’s just Connor. He’s humble and he goes about his day.”
On the ups and downs of the game: “My stick broke on the first goal, got a goal called back, leo got a goal called back. They got one iffy one called back too. You just got to keep working. All that matters is you get the win, right? I think we just did a good job battling. We were down two goals early in the second off a too many men penalty, then just scored.”
On Duncan Keith’s game: “Just unphased. That’s a guy when you talk about somebody who has seen it all, has done it all. Whatever defencemen award you want to say he’s won it, and he’s a future hall of famer and that’s a guy that was brought in I think to calm the group in times that aren’t going well. I think he’s a big voice in that locker room in settling us down. Then obviously stepping up today. Huge goal, just making plays, being strong defensively. He’s got a lot to give.”
On Leon’s leg, his ability to still produce: “He’s an elite player. He’s able to score and just made a great play. That was a huge play for us, an insurance goal.”
On going back to Edmonton: “It’s awesome. Can’t wait to get back home. It’s going to be rocking, it’s going to be loud. I’m excited.”

On sticking with the game: “Obviously we didn’t get the start we wanted. Didn’t make it easy on ourselves, but obviously responded well.”
On Mike Smith’s game: “He played great. Just a battler. Played great in there, made some big saves. Made a big play there to leo to spring him there. A little bit of everything from him tonight.”
On Leon’s disallowed goal: “Just trying to take the puck to the net. I beat my guy. I’m trying to get out of the way, Markstrom’s kind of coming out at the same time. It’s the same old story, you never really know. They deemed it that way and that’s the way it goes.”
On if he was hungry to get that one back: “I’m always hungry to make a play. Just happy to contribute.”
On how the Oilers were better: “I just thought we battled harder, that was all. Working, being harder in battles, winning 50/50 pucks. We didn’t win many in game one. I thought we a better job of that. We defended better, I thought. Still gave up some chances, but Schmiddy played well.”
On the roller coaster of up and down games, if they’re navigating it better: “I don’t think you can ride the roller coaster. It’s hard not to, obviously. Losses are no fun and wins are lots of fun. All we did was get a split here. Big game three Sunday.”
On Hyman’s goal: “It was a big goal, a really big goal. Special teams are a big part of the series. We got a powerplay goal, to get a shorthanded goal is usually a good recipe.”
On the Oilers as a group, heading back to Edmonton: “The focus is game three, and that’s all. You can’t look to far ahead. Big one game three.”
On if games like tonight are why Ken Holland brought in Duncan Keith: “He brought Duncan Keith here for a number of reasons. His game was great tonight. His game has been good all playoffs long. He’s huge for us. He’s such a veteran presence back there. Such a big, big voice in the room. He’s just been great tonight and tonight was a real good one.”