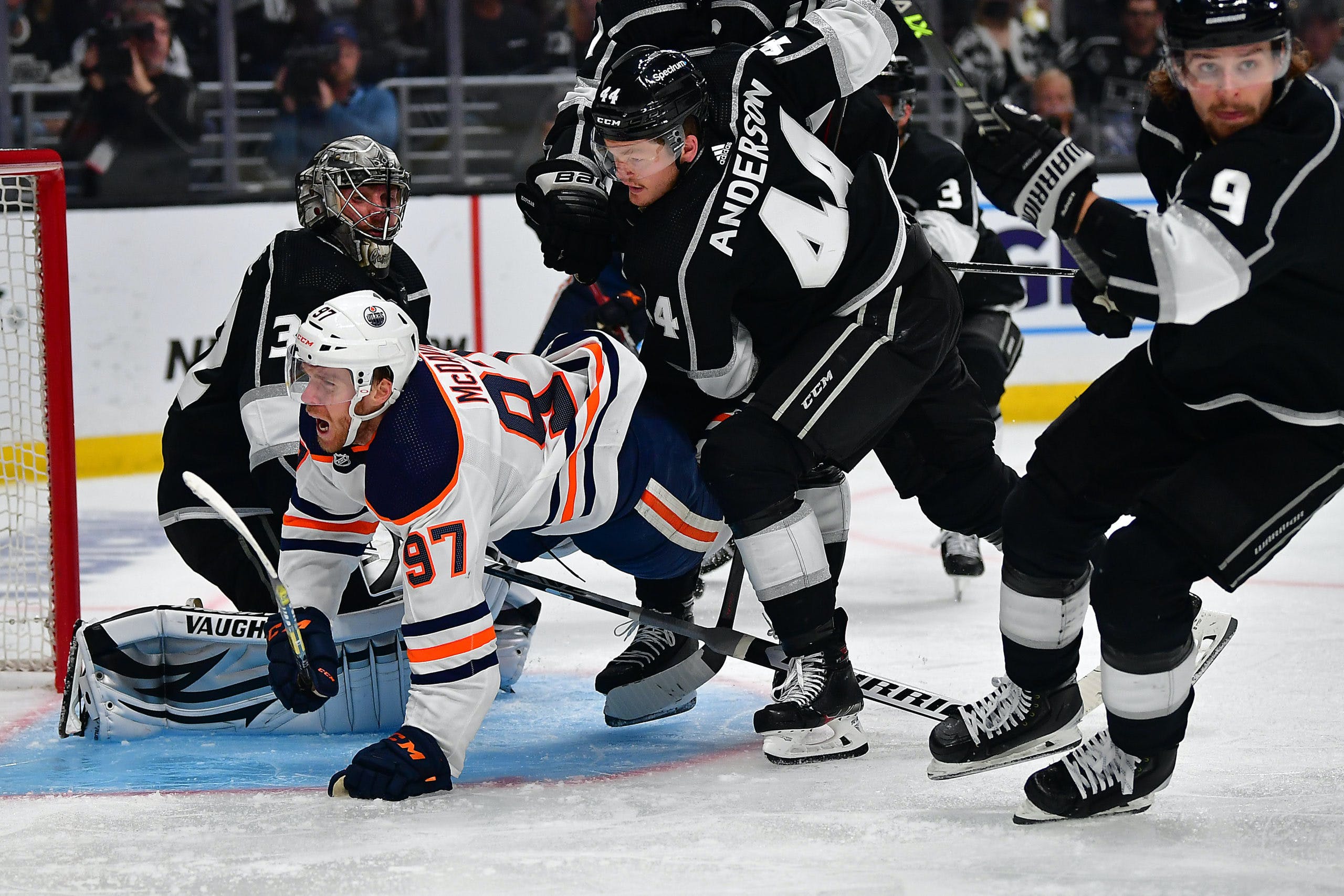 By Zach Laing
8 months ago
That sure wasn’t pretty.
And now, there’s a massive game five set to take place Tuesday back in Edmonton.

On the game: “They come out and we know they’re going to respond. We were losing puck battles early, letting them get to our net a little too easy. They put pucks on net, they worked, and we didn’t respond well enough early. That’s a tough team to come back on. We have to learn from this and move onto game five at home.”
On if the pushback from LA was more than they expected: “We just have to be able to respond. We see them come out like that, we know. We did a good our first game down here. They came out flying and we pushed back. We had our push. We need to do a better job of that in the future. It’s a big one at home now and we have to have that start, that same mentality of pushing and creating our own energy.”
On the Oilers’ powerplay being flat: “I think it’s the same thing across the board. Penalty kill, 5×5, powerplay. It’s just working. We need to outwork those guys and they were working on their penalty kill tonight and didn’t give us as many looks. We had some looks, and quickly stood in there. 5×5 same thing. We got to find a way to break him down.”
On if there was an adjustment period without Derek Ryan in the lineup: “I don’t think there’s an adjustment. He’s a smart player, brass. We’ve played together before. Veteran player, knows how to play the game, smart player. As the game went on, we didn’t play much together but I thought early, it was ok. A lot of guys are pretty interchangeable in there and we can find chemistry no matter what.”
On the line blender coming out, if there was a struggle to find chemistry: “I think guys have played together enough it shouldn’t be an issue. We had our looks. We couldn’t find a way to put one in and change the game.”
On if the oilers struggled through the neutral zone: “We know that’s how they want to play is put the puck in, not give us anything off the rush. We’ve done a better job than tonight in the previous three games. I think I’m going to keep hounding on it, it just going to come down to work. We have to outwork them and we’re going back home and we’re going to need the same push they had early in the game. We need to make sure we push them out of the game early.”
On it now being a best-of-three, if the mindset changes: “It shouldn’t change anything for us. We know we’re in a battle here. We know that’s a good team over there and there’s no team that’s just going to roll over in this league. Everybody is here for a reason and it’s just going to come down to who wants it more.”

On what he thought the Oilers’ game was missing: “We didn’t start as well as the last couple of games. They jumped on us, got a 2-0 lead, got in a comfortable position and played their game.”
On if he felt the Oilers lost too many battles: “Yeah, for sure. If we come out at the start a little better, put ourselves in a better position coming out of the first period. Battling is a big part of that.”
On if the Oilers needed to make things tougher on quick early on: “That’s a good team. They’re going to come back and make their adjustments. He’s a good goalie. He’s been a really good goalie in this league for such a long time, he’s not just gonna come back and feel bad. He’s going to play his butt off and he did tonight.”
On the physicality at the end of the game: “We’re four games in. The blood starts to boil a bit. That’s all.”
On if the Kings’ urgency was a difference-maker: “They came and pushed and we didn’t push back hard enough. That’s how you get the lead there. We played into their hands and their style of play.”
On the Oilers refocusing for game five: “You got to stay even keel. We move onto the next one. It’s a huge one at home.”
On Grundstrom’s goal: “He was strong, made a good play.”
On if the Kings tactically changed to get on the oilers: “They just pushed hard off the bat. They’re a good team, they weren’t just going to roll over and let us come steal another game in their building. We have to move on and be ready for a big one in our building.”
On it becoming a best-of-three: “We just focus on the next one. The next one’s the big one, we’re not looking too far ahead. We have to come out and make sure we have the right effort on home ice here in a couple days.”

On what he felt the biggest difference was from the Oilers: “I didn’t think we started anywhere near where we needed to start. We knew they were going to come with a push and we didn’t weather it very well, certainly not the way we wanted to. We fell behind in the game and certainly had our chances to score, but sometimes you get what you earn, and tonight wasn’t where we needed to be. It’s a missed opportunity for us.”
On if he was surprised with the Oilers play early in the game: “Nope. I just didn’t think we skated at the level we needed to skate at. I didn’t think our battles and stick fights were where they needed to be. We’re better, we’re capable of more, and we’re going to digest this game and give our players something as a focal point heading into game number five.”
On Derek Ryan being out of the lineup: “He was a little dinged up, so just out of precaution we held him out today.”
On mixing up the lines: “I thought at that point, there was four-on-fours, penalty’s being called. We were just trying to get people an appropriate number of minutes and at the same time, look for a little bit of a spark. We had moments in the game that we certainly created chances, but not at the level of sustaining zone time for long periods of time that we’re used to. You get what you earn and tonight, we weren’t sharp enough to convert on our chances when the time came.”
On the Ryan Nugent-Hopkins line: “It was kind of all over the map there in terms of their ice time.”
On the Oilers managing emotions: “It’s one game at a time for us. Today, we dropped a game. It’s a missed opportunity and that’s what it is. As I said, we’ll do our work, digest the game and give our players something that will be a focal point heading into game five.”
On the powerplay: “I thought we had a few chances on the powerplay and we didn’t convert. I thought it was similar to our overall game as a team. To a man, all of us can be better.”
On how different of a team the kings are playing with a lead: “I think they’re a competitive hockey team anytime they play. That’s not unexpected. We know the level we have to compete at, and we certainly have more to give.”
On if the Kings were more tactical in their game: “I thought in the first few minutes, we ended up having a breakaway, we had a couple of chances that we didn’t convert. I just thought there were moments there we’d like to have back. I think the first goal went off the referees’ helmet. It was a weird bounce and all that kind of stuff. We can play that situation better. The second goal was a four-on-four goal that went in off our stick. It was a 2-0 hockey game. We had chances, we didn’t score. We can be better. To a man, we will be.”
On the oilers resetting ahead of game five: “We look at our opportunity heading into our next game, it’s game five on home ice. That’s where we’re putting our focus and our attention is how can we be better.”
Zach Laing is the Nation Network’s news director and senior columnist. He can be followed on Twitter at @zjlaing, or reached by email at zach@oilersnation.com.
Nation Takes
News
Oilers Talk
Recent articles from Zach Laing