Clips and Quotes: Edmonton Oilers fall 9-6 to Calgary Flames in game one 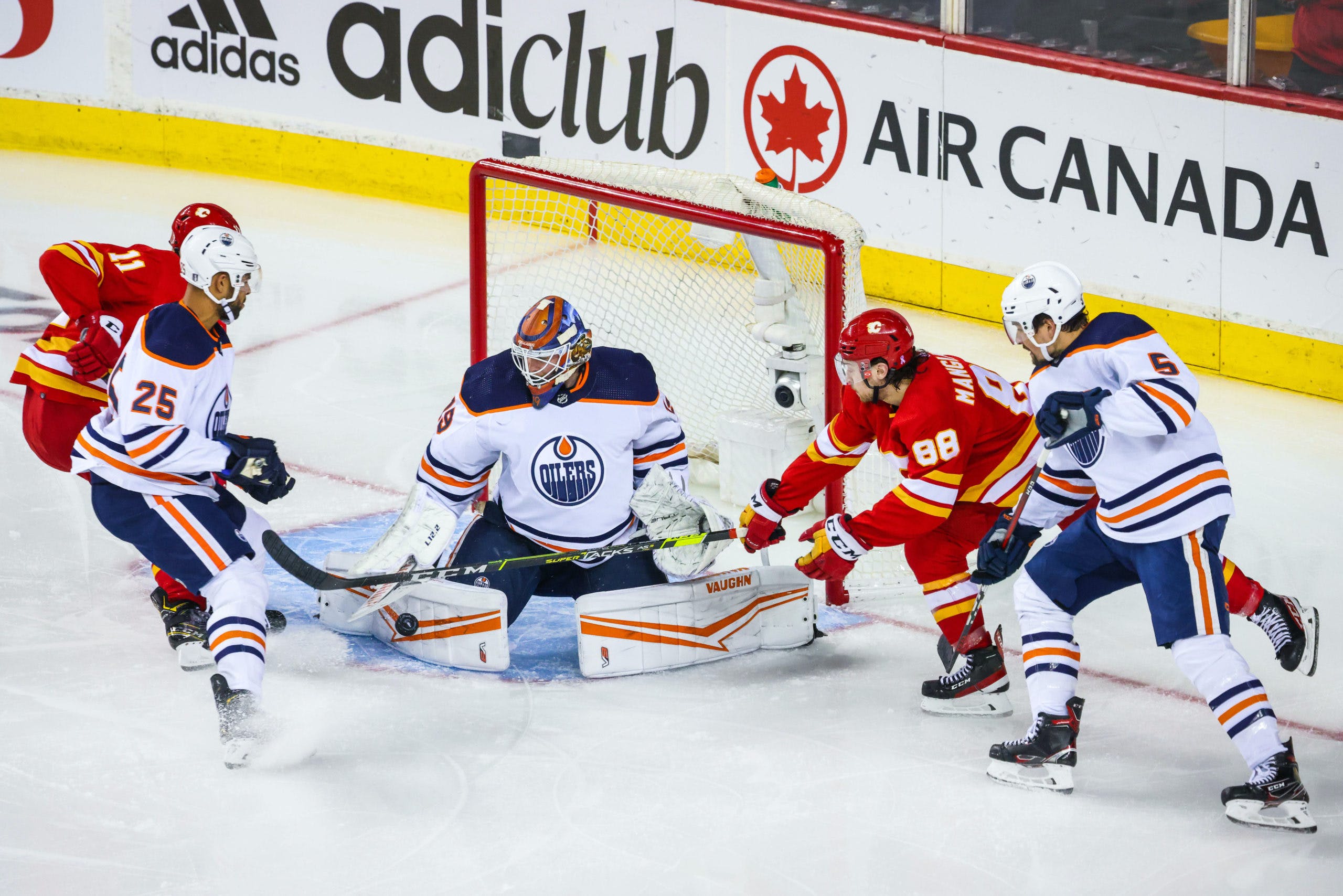 By Zach Laing
8 months ago
And exhale…
Game one was far from what the Oilers wanted, and now, they’ll have to regroup after another shaky start in the playoffs.

On the Oilers’ start to the game: “We had an awful start. Move onto the next one.”
On what was missing from the first: “They come out jumping, get three on us, and you’re chasing the game from there. Get off to a better start for game two.”
On it being like the 9-5 game from a few months ago: “Some similarities going into the third and we tied it up, but didn’t get the next one.”
On battling back in the game: “They made the most of their opportunities, got the crowd into it. Long series.”
On what the Oilers need to change defensively: “You can’t give up nine.”
On if it’s the nine goals, the 48 shots, or all the chances: “The 48 and all the chances lead to the nine. Gotta clean that up.”
On the oilers’ slow starts, if it’s frustrating for the group, turning it around: “We’re capable of it, I don’t think we’re frustrated at all. This is game one of a seven-game series. We know what needs to be better in game two, and we’ll worry about taking care of it… We know we can do it.”
On the physicality, if the oilers need to match it: “It’s going to be a hard, physical series and we weren’t hard enough tonight.”
On the biggest issue he saw: “We gave up too many grade A chances.”

On the Oilers’ start: “If you go down 2-0 before it hits the 19-minute mark on the clock, it’s obviously not a good start. Clearly, we weren’t ready and it’s tough to play catchup for the whole night.”
On what happened after it was tied 6-6: “Just a couple mistakes, collectively, individually that ended up right on their tape and in the back of our net. There’s lots of things obviously we need to clean up.”
On the Oilers not finding their defensive game: “It’s just little mistakes, little misreads that we obviously have to fix really quickly.”
On the Kings’ sit-back 1-3-1, vs. the Flames’ aggressive play, if the oilers need to adjust: “Yeah, for sure. It’s a different team. It’s built very different, very different system, but it’s nothing we haven’t seen before or something we can’t handle. You’re not going to win any games if you get scored on nine times, there’s no secret to that. I think we can all be a lot better away from the puck, and that starts with myself.”
On the Oilers’ powerplay woes: “We didn’t really get any momentum going on our pp. It’s another thing we’re looking to improve and be better next game.”

On the Oilers’ start: “To a man, not one of us was anywhere near we needed to be when we started the game. You don’t draw it up giving up two goals on missed assignments on the first two shifts. We gave up a goal at the start of the second period as well. We fought back and made it a game, but we can’t feel good about that in anyway, because you scored six goals in a game and found a way to not win it. There’s a lot of things for us to clean up and we’ll go through the tape and give our team some.”
On it being like the 9-5 game from a few months ago: “Little bit different. We scored on the first shift that game and it was 3-2 at the end of the first period. Bottom line, too many goals against and to a man, all of us can be better.”
On the Oilers’ 5×5 play: “We scored six even-strength as well, and that goes to my point of we scored six goals and that should be enough to win the game. There’s a lot of things that we can do better and we will.”
On closing out the kings with good defence, then this happens: “I would say physically, I didn’t like the way we skated in the first period. I didn’t think we were on our toes, or assertive in any way. Mentally, for sure we missed some assignments. We got pushed off a few pucks. In the end, we weren’t good enough and they made us pay. The one thing that we talked about was not having any independent contractors. When the game got to 4-1, 5-2, I thought our team did work to make a game of it, but in the end, as I said, we scored six times. There’s no way we should not win that hockey game.”
On getting it to 6-6, being unable to close it out: “In between periods, we talked about the team that’s going to get to their defensive game first was going to win that game. We turned some pucks over after it was 6-6, and it ended up in the back of our net, so not good enough. As I said, we scored six goals on the Calgary Flames in their building on their starting goalie. That should be enough to win the game.”
On the physicality: “I think there was a physical attachment to the game early. I think if you look at the game sheet, Connor led our team in hits tonight. It’s a good thing for him because he’s playing hard, but we can have more physical attachment to the game. To me, that’s not even the finished check or the scrum, it’s the 50/50 battle, it’s body position net front, how hard you are around your blue paint, how hard you are in front of the blue paint. We weren’t good enough to man, all of us.”
On if the Oilers had enough players willing to play uncomfortable: “Not tonight, we weren’t good enough tonight. I didn’t think our powerplay was good enough either. That’s a form of our toughness as well.. If a team wants to take liberties, for us to be able to sting teams on the powerplay. I didn’t think we were sharp. I think it was symptomatic of the rest of our game. In the end, we scored six even-strength goals. We should win that game and to me, in those type of situations, you should be hanging your hats on your defensive details. For us, they weren’t here tonight.”
On where this sloppy game came from: “I think what we realize is tonight’s worth one game. We’re 0-1 in the series. We have a lot of really good leaders for players. We’re going to go back to the drawing board and address some issues that showed up. We’ll work at our game and be ready come Friday night.”
On the Oilers powerplay struggles, beating the flames’ aggressive penalty kill: “I think in the regular season, we handled it pretty good. Tonight, I thought it was symptomatic of the rest of our game.”