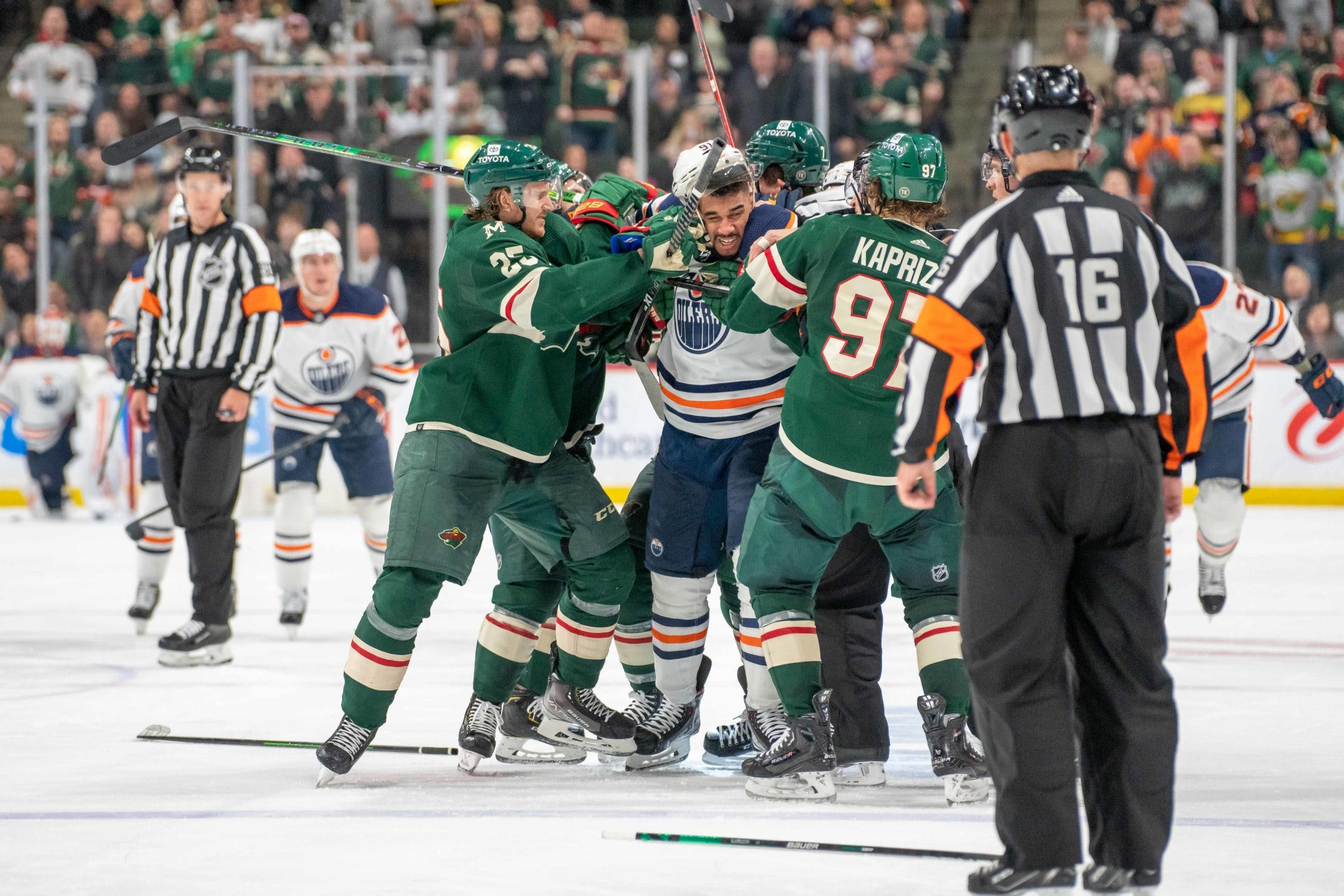 By Zach Laing
9 months ago
Ouch. Final score: 5-1.
Far from an ideal start to this two-game roadie, but let’s see how they respond with the Nation in Nashville Thursday.

Hyman on the game: “Yeah, obviously a tough one for us. Just execution. I think executing on plays. We had trouble breaking out and that’s just not on the d, that’s the whole group coming back, supporting each other.”
Hyman on if Minnesota has the oilers’ number: “Nope. I don’t think we’ve played our best in any of those games that we’ve played them. It’s not like we’ve come into any of the games and left feeling good about ourselves. I think we have to play well, like I said.”
Hyman on defencemen making turnovers that lead to goals, and if it’s not as simple as guys giving the puck away: “There’s more to it than that. We’re all good hockey players, right? There’s holding a guy up, allowing your d to have an extra second. There’s little plays that probably go unnoticed above, that go noticed from the players. Being able to help our d in different scenarios. When you feel like you’re on an island, it’s easier to make mistakes than when you feel like you’re being supported. Mistakes do happen, but as a group, I think we have to be better and take care of each other. When somebody makes a mistake, you can be in a position to back them up so it’s not a goal. Most people don’t forget about those, they don’t go in the net.”
Hyman on struggling against the wild: “I mean, it’s three games, right? Good for them. They’re a good team, they’re deep. But you know, we’re a good team and we just haven’t played our best. It’s not like we’ve come in there and it’s been best on best. I think they’ve played really well in the games we’ve played them, and we haven’t been to that level yet.”
Hyman on big losses, like the one in Calgary: “Listen, it’s an 82-game season right? I think we’ve put ourselves in a really good position. I think that we’ve been playing really well as of late. I think you’re allowed to have… You don’t want to have blips on the radar, but you’re only human, right? I think this is one of those things where you get back at it the next day and you make it a blip. You go back to playing the way you know you can play, and we did that after you said the Calgary game and we’re going to do it again after this one.”
Hyman on it being a playoff mentality: “Yeah. In playoffs, it doesn’t matter how much you win or lose by it’s one game at a time, it’s a win and a loss.”

Kane on the game: “Yeah, definitely not what we wanted to transpire tonight. I think we played pretty well in the first period. We make a mistake and mistakes happen, that’s no big deal. We should respond, but we came out flat in the second period. We didn’t have everybody going tonight and they took advantage of their opportunities they got.”
Kane on if the Wild have their number: “I’ve only played them twice this year, so I can’t speak for the other matches. We obviously haven’t played our best hockey against these guys and the games have been a little lopsided. Sometimes that’s just the way it happens in the course of a long season. It’s maybe not just the opponent, it’s just the way timing it. We’ve had a good stretch of hockey here and we’ve dropped a couple. Played well in one, not so good tonight.”
Kane on if the game was less lopsided than the score showed: “Yeah, I think the goals they scored, the great majority of them we handed them. We did spend some time in the ozone and were able to grind them down. We didn’t get the bounces we would’ve liked in the offensive zone, but it definitely didn’t feel as lopsided as the score indicates. At the same time, we can’t be giving up those kinds of opportunities to teams that can capitalize.”
Kane on if there’s a level of concern on the defensive side: “No, I think mistakes are going to happen. You just have to try to limit them. We didn’t do a very good job of that. Like I said, we had a pretty good first period, we’re down 1-0 playing well. I think we’re outshooting them halfway through the second, we’re spending a lot of time in their zone. But again, we gave them too many opportunities and they capitalized and we didn’t.”
Kane on what the mood was like in the room: “I think obviously we’re not happy, nobody is happy in the room. I certainly wasn’t. At the same time, we can’t sit back and concern ourselves too much with this game. We have to bury it and move onto Nashville who’s in a race for a wild card spot and we’re trying to solidify ours. We have to get ready for another good hockey team on Thursday and rebound after a night like this.”
Kane on rebounding like after the Calgary loss: “That’s a good example. We seem to be able to rebound after some not-so-good performances and that’s what we’ll be looking to do in Nashville for sure.”
Kane on the linesman stepping in between he and Ryan Hartman: “It took all five guys and they couldn’t bring me down. I definitely would’ve liked to get loose, let’s put it that way.”
Kane on Hartman: “These little guys, they want to act tough but they wait for the linesman to come in.”

Woodcroft on the game: “We thought we were the authors of a lot of the chances against. Just with our breakout execution, our net play. We can be better.”
Woodcroft on if there’s a level of concern with the defence: “I would say we’ve tried to have the mindset of taking one day at a time. Today wasn’t our finest hour, we didn’t come away with any points in a tough building. We can play better.”
Woodcroft on the Duncan Keith – Evan Bouchard pairing: “It was a rough night, and it’s not on one person, it’s not on two people. As a team, we can be a whole lot better as a group of five people breaking out of your own zone. We’ll address it and get better tomorrow in practice.”
Woodcroft on rotating right-wingers in the top-six: “Just trying to find a spark. I thought we were a little bit flat and moved some pieces around. Unfortunately, we didn’t get what we wanted there. We have a lot of good forwards I know they’ll respond.”
Woodcroft on if this game is an example of being a learning point to becoming a great team: “Well, what I thought about that game tonight was it was a heavy game. It was a game where every shift mattered. I didn’t think leaked a whole bunch of chances, or were spending numerous amounts of time in our own end. I think on the night we gave up 23 shots. Are there moments where we can be a lot better? There are. And specifically, if I was to kind of nutshell it, our breakout execution and our net play has to get a whole lot better, especially against a team of that calibre.”
Woodcroft on making sure a game like this doesn’t happen again: “Right now, like I said, we’re going to digest this game and we’re going to pick out the things that need to happen for the Edmonton Oilers. I’m not as much concerned about what the Minnesota Wild did to us, or whatnot. I’m more focused on how we’re going to improve tomorrow. I’ve relayed it out to you the two areas, based on what we saw tonight, that have to improve going forward are our breakout execution and our net play, it’s as simple as that. It comes down to five players being on the same page. Even though we only gave up 23 shots, the chances we did give up, there were too many grade A’s.”
Zach Laing is the Nation Network’s news director and senior columnist. He can be followed on Twitter at @zjlaing, or reached by email at zach@oilersnation.com.
Nation Takes
News
Oilers Talk
Recent articles from Zach Laing