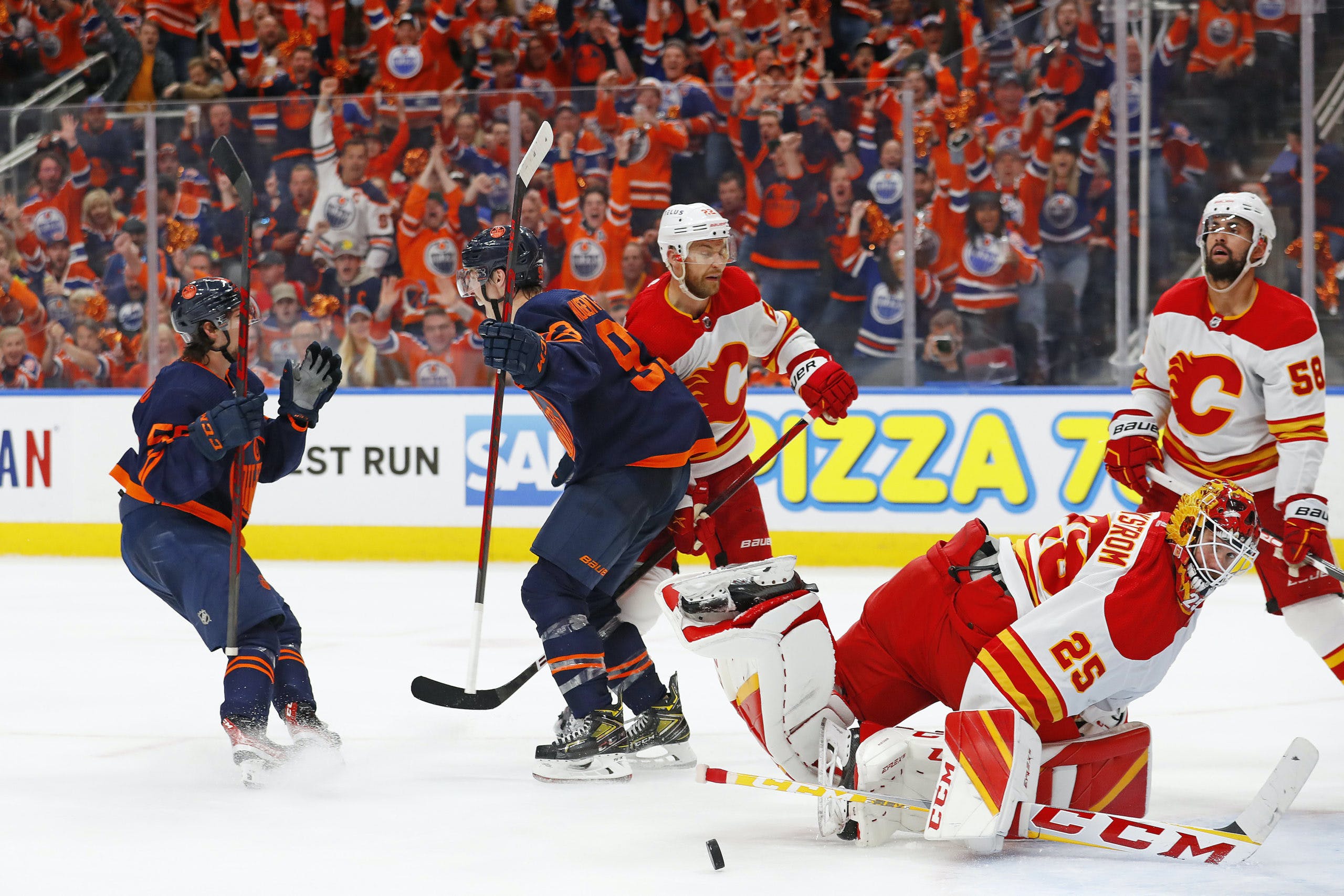 By Zach Laing
8 months ago
I don’t know what to do with my hands.
That was a uh… wild one. From going up 3-0, to having the game be tied at 3 in one of the wildest goals I’ve ever seen, to seeing Ryan Nugent-Hopkins score the game-winner, it was quite a game.
Now, the Oilers get a chance to close it out at the Saddledome on Thursday night.

On his goals: “That first one was a fortunate bounce, then the last one, tys puts it in a good spot and I just tried to go to the net and bang it in. Obviously, we stuck with it all game. We knew they would have a pushback and we stuck together, didn’t turn on each other at any moment, it shows good signs for our team.”
On how the Oilers regained composure after the 3-3 goal: “Obviously talked to each other on the bench. The main thing was we had to keep pushing and 3-2, 3-3, the goal is to keep going. Stuff like that happens. I mean, it’s hockey. Bounces happen. Like I said before, the way we stuck together — there was no quit in our game.”
On the talk of ‘one player winning the game’ for the Oilers, if they take it personally: “I think no matter what, obviously he’s the best player in the world. He’s going to make a difference every night. We’re thankful to have him on our team. At the same time, everybody follows his lead and the way he works. He does things offensively nobody else can do, the way he works, finishes checks and backchecks. That’s something everyone can follow his lead by doing. I think we all stepped up tonight and every game is a team game, we know that. You can’t win with one guy, two guys. It’s a tough league, especially come playoffs you need everybody pulling the same rope.”
On all the fans outside the media room cheering: “It’s amazing. The atmosphere in that building tonight was something I never experienced and it was pretty good in ’16-’17, the first round, but tonight was something special.”
On how much he feels the Oilers are better at dealing with moments where teams are storming back in games: “I think that’s kind of been a theme with us all year. We’ve gone through some adversity this year and the way we’ve stuck together and came out the right end of it, it shows the character that we have in that room and the resilience we have in the group. Stuff like that happens every game and you got to find a way to stick with it. I think we’re well equipped to be able to handle situations like that now.”
On if that’s the biggest goal he’s ever scored: “Yeah, I don’t think there’s a question. A lot of work to do, but obviously would rather be up 3-1 than 2-2.”
On Yamamoto getting the puck to the point on his game-winner: “He did what he does best and he goes in, it doesn’t matter what the size of the other guy is. He’s gonna go and work his ass off… Work his butt off to win that battle. It goes without saying that was a huge one. He does that all the time. It’s one of those little things that goes unnoticed a lot of the time. It makes a huge difference in the game.”

On his third-period blunder that allowed Calgary to tie the game: “I can laugh now, right? I don’t think there’s been a time in my career where I’ve lost a puck, or I have no idea where it went. Talking to some guys after, I wasn’t the only one that didn’t know where it was either. Made me feel a little better, but yeah, I mean. You don’t want that to happen, ever. But unbelievable goal by nuge at the end there to give us a boost back and get up in the series. A win’s a win.”
On the lessons learned from game four against LA, what they learned this time around: “We got up 3-0 in the first there, but I don’t think we played our best period by any means. Like nuge said, we stuck together as a group, we never wavered. We just kind of found a way to win a game. In the playoffs, that’s what you have to do. We could’ve easily packed it in after they got that long one on me. We showed resilience to come back and score a big goal there and push the series to 3-1.”
On the Oilers’ blueline playing smart, composed hockey: “It’s getting unnoticed a little bit, but the composure the guys are playing with back there is impressive. It really is. They’re doing a lot of little things, a lot of the leg work that it takes to get pucks out, get pucks to our forwards as quick as possible. They got some big guys on their team that are physical and the d have done a good job to avoid those collisions. Not only that, but get the puck moving and like I said, get the puck up and out of our zone in key moments in the games. It has been everyone back there. Everyone has played a big part in where we are in the series and we want to keep that up.”
On if this is a kind of game that is a sign the Oilers have something going: “Well spec, I think every game you play in the playoffs you gain experience. There’s ebbs and flows to a game, to a series, and they’re all learning experiences throughout the course of a game. There’s stuff that happens that’s never perfect. But it’s how you handle it, how you battle through the adversity sticking together as a group. We’re doing that. When we’re down, we’re finding ways to get back in games. We had a lead there and obviously they tied it up there, no one panicked. Everyone kept their composure. You get a big goal by Nugget there to seal the deal, but yeah, there’s definitely growth in this team. There’s a confidence that this team is playing with that we believe we can do some damage. Every game that you win you gain confidence from, but you just want to keep that ball rolling. You want to keep doing the good things that make our team successful. I feel like the structure that we play when we do it, it makes us a real good hockey team.”
On the ‘one guy’ comments: “I mean, it never is, really. In hockey, it’s the ultimate team sport. Obviously, Connor, like Nuge said, is the best player in the world. He’s going to do some damage out there, but he can’t stay on the ice the whole game. There’s a lot of other players that are playing important roles whether it’s shutting down other guys on their team, or d going out there blocking the biscy and keeping it out of our net. It takes a whole unit to win and you’ve seen that with teams that have won the Stanley Cup in the past years. It’s not just one player that does it. There’s always an unsung hero that scores a big goal at the right time in a series that pushes you to the next round. Tonight, Nugget’s the guy. We’ll just keep pushing forward as a group.”
On the feeling of his teammates picking him up: “Like I said, it’s never perfect. When something like that happens, that’s unusual. It’s not a very good feeling, personally. This team has never wavered from mistakes that are made in games throughout the course of the season. We’ve always found a way to stick with it. Like I said, another instance of it tonight. Some adversity there at the end, nobody ever hit the panic button. We stuck with it and found a way to get a win. That’s all you ever want to do in the playoffs: score one more goal than the other team and win the game. We did that tonight and we’ve pushed the series along.”
On Jay Woodcroft, how he’s been as a rookie head coach in the playoffs: “I think woody’s done an unbelievable job to be honest. He’s a detailed coach that gets his message across and it’s very clear what the objective is. Everybody knows what their job is when they get on the ice and he’s put the plan in place, it’s about going out there and executing. For the most part, we’ve done that. He’s done an unbelievable job too turning our season around and put us in a position to be successful. It’s now about the players going out there and doing it.”