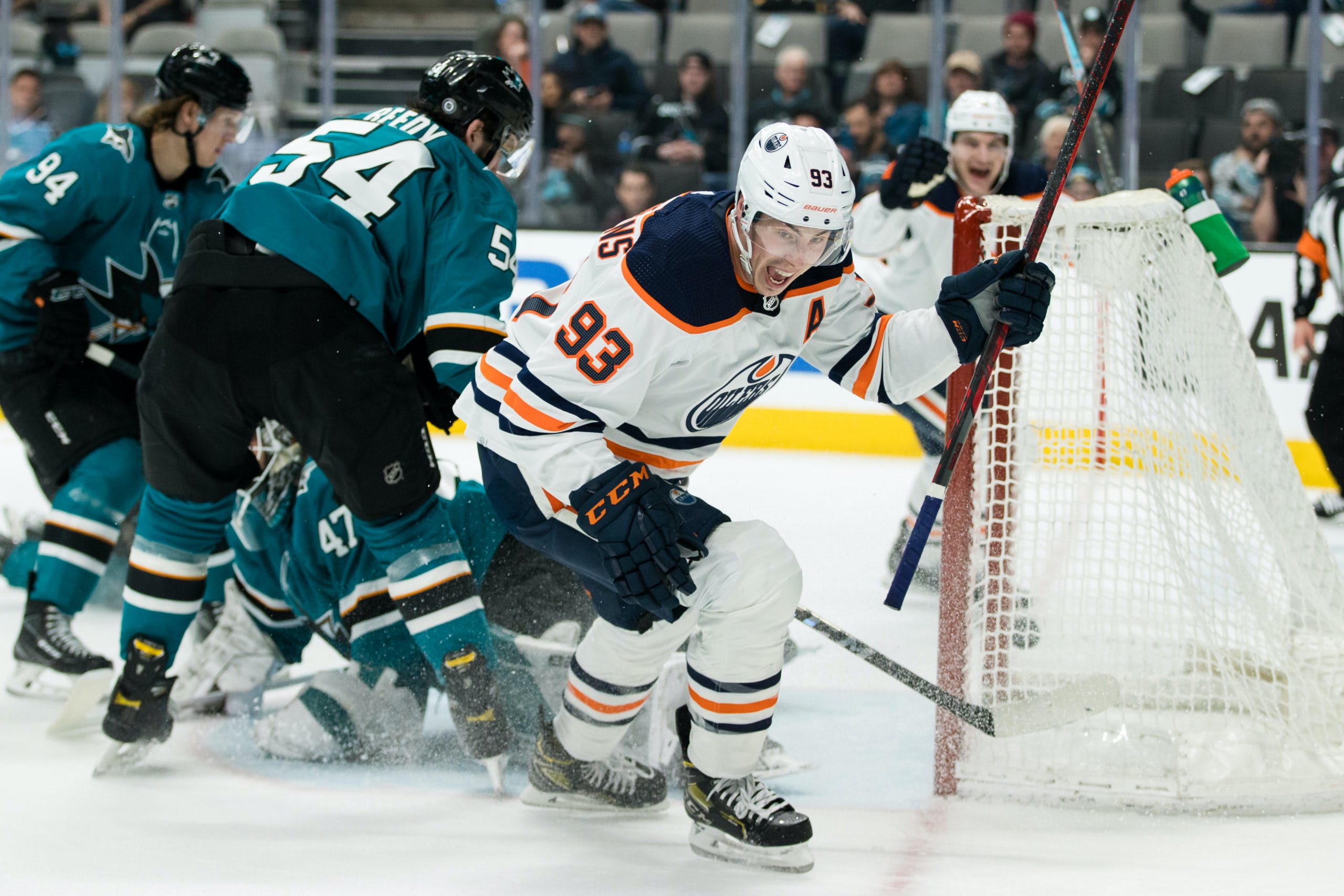 By Zach Laing
7 months ago
Mike Smith: curling champion. Final score: 2-1 OT.
I mean, what more can you say? That was one of the most boring games I’ve watched in a while but still, I was jumping out of my seat for that OT. BaggedMilk has the Wrap Up.

On the game-winner: “We had a chance at their end, and their goalie kind of keeps the puck moving when I’m diving in. Couldn’t quite catch Burns there, our goalie makes maybe the play of the year with the save and then having the presence of mind to throw it up there. Schmiddy plays the puck unbelievably well and he was so good all night. For that to happen, it was pretty special to be a part of that play. It was one of the more special ones I’ve been a part of.”
On Smith: “Schmiddy’s been here for a few years now and he’s always asked me when we’re going to connect for a breakaway. Couldn’t of picked a better time there.”
On gutting out the win: “It was ugly, it was ugly I thought. They were fresh. I thought they played a real solid game. They were more motivated and I thought our group just did a good job of hanging around and keeping it tight. Schmiddy held us in all night. It feels like we kind of maybe stole two here, but it doesn’t matter how you get them this time of year.”
On the Oilers winning in different ways: “It’s kind of been an up and down year, it’s kind of been all over the map. Now we’re just fighting for our lives trying to get it and getting performances from different guys every night. Tonight was our goalie.. He’s a player on our team too and he’s stopping pucks for us and clearly making plays for us too.”
On the Nugent-Hopkins goal: “It was big. Really big play from everybody. Started from all the way behind our own net. He makes a great play to create the chance, Nurse keeps it alive, and Hyms slides it over. Great play all around and something we really needed at that type of game.”
On Smith again: “He’s a guy that means a lot to our group, honestly. He’s battled all season long through injuries and different things. He’s taken a lot of heat. When he’s in the net, he gives us everything he’s got. Tonight, he gave us everything he had and then some.”
On not having Leon Draisaitl in the lineup: “We missed him tonight, obviously. Anytime you take that type of a guy out of your lineup you’re going to miss him. We certainly did tonight, and I’m glad we were able to find a way to get two without him.”
On how Evander Kane has helped the Oilers: “He’s been great for us. I think it took him a little bit for him to find his legs, and since he found his legs, it’s been impressive. He’s a guy that gets up and down the ice amazing for his size, scores big goals, plays with an edge, physical presence. He’s kind of done it all for us.”
On the smith pass: “I saw him make that save and I was just thankful he stopped it. I kind of sensed out the corner of my eye I saw him move pretty quick so I just tried to get there as quick as I could. He must be a curling fan or something, he had perfect weight on it.”
McDavid was asked ’40+ goals, how impressed are you with yourself’: “(laughs) It’s my job to produce and I just try to do that every night.”

On the game: “Definitely not the prettiest, not how we drew it up, but I don’t think it happens without Schmiddy. Playing goalie and playing playmaker. Find a way to win, right? We didn’t give up an even-strength goal, gave up a powerplay one there but got it back on the kill.”
On Smith’s passing ability: “Yeah, it’s great. Just on breakouts too when another team is tired and they think they can dump it in he can play it like a defenceman and pass it up to you, then you’re on the attack again. Obviously, it was on display in overtime, but he does it consistently and makes our d’s life easier. He creates offence for forwards.”
On the Nugent-Hopkins goal: “I just kind of got a break there and Nuggy and I had a two-on-one for a second. Doc followed up and was able to make a play for me. It was kind of a rolling puck all the way through and just ping-ponged to Nuggy and he put it in.”
On Smith’s intangibles: “I think even when he’s not in-between the pipes, his personality, the type of guy he is, he’s a leader in the locker room. Been in the league for a long time. For a goalie, he’s pretty outspoken and leads by example. His work ethic is second to none, and obviously, his play speaks for itself as of late. A pleasure to be around and just a great guy and great teammate.”
On getting the win without Draisaitl: “It’s huge. Obviously, Leo doesn’t miss too many games. He’s pretty durable and he’s a huge, huge part of our team. To get a win, hopefully, we’ll have him back in the lineup soon and we’ll be rolling. Just a huge part of our team.”
On the oilers being shutout through two periods: “I think they played, for a team that’s where they are in the standings, I think they played hard. They got a lot of young guys who are fighting for jobs for next season and they definitely played hard. They kept us to the outside, didn’t get too many good looks. We were able to stick with it, push one through in the third, and force ot. Give them credit, they played well.”

On the game: “I thought our team showed a little bit of resiliency. I didn’t think it was our smoothest game, or cleanest game. Down by one heading into the third period, finding a way to win in overtime, dramatic fashion. It’s a credit to our stick-to-it’ve-ness and the hard work of all those players in the dressing room.”
On not having Leon Draisaitl: “I thought it was a good team effort. Like I said, I don’t think it was our cleanest or sharpest or bet game of the year or anything like that, but we stayed on task, we stayed with it. We talked in between periods about how even if you’re not feeling well, it doesn’t mean you can’t play well. How you play well is by sticking in the team structure. We had moments where we’d like to have back, for sure but there was a lot of really good individual plays that helped us gain two points. Like I said, that’s a credit to the hard work and dedication of our players.”
On the OT winner: “I felt comfortable with everyone we had on the ice. Mike makes a big save and displays his hockey sense. To me, that’s hockey sense. Obviously, he has the skill to be able to move the puck, he’s the best in the world at it I think but his hockey sense to realize Connor had a step and just to put it in an area and let him go skate onto it, I think you don’t see that every day.”
On Smith: “He made some big saves for us. I think part of their game plan was to fire it on net from all angles, then have one shot lead to two. We had some breakdown tonight. Like I said, we had a lot of breakdowns tonight — we weren’t clean. When we needed them, mike was there when called upon. And in the end, he made the play in overtime, got it to our difference-maker, and Connor found a way to get the back of the net.”
On the oilers being patient in low-scoring games: “I think there was a level of patient endurance to this game, not forcing things. We were down by one, but we felt comfortable with the people that we have to ice. We have a comfort level in our structure. It’s not easy to win in the national hockey league, it’s not easy to win o the road in the national hockey league. I would like to give credit to the other team, because I thought the San Jose Sharks played very hard tonight. In the end, we stuck with it, stuck with it, stuck with it and it took us 60 minutes and 30-odd seconds to find a win. Like I said, in the end, it’s a credit to our players.”
On how Evander Kane has helped the oilers: “I think Evander Kane has been a heckuva hockey player for our team. I think he compliments some of our high-end centremen. He brings a physical element to our team, he plays in basically every situation. I think he’s a really good addition to our club.”
On Nugent-Hopkins’ goal: “For me, having Nugent-Hopkins back, healthy and contributing, I think it makes us a way, way deeper team. It allows us as a coaching staff to move some chess pieces around the chessboard. One thing most of his teammates know, and certainly his coaching staff appreciates. He’s somebody who’s selfless. He’s just a phenomenal teammate. He does whatever the coaching staff asks and to see him dig in and find a way to score shorthanded tonight is a huge goal. It led us to getting two points under difficult circumstances.”
Zach Laing is the Nation Network’s news director and senior columnist. He can be followed on Twitter at @zjlaing, or reached by email at zach@oilersnation.com.
Nation Takes
News
Oilers Talk
Recent articles from Zach Laing