Cody Ceci thrived in a top-pairing role under Jay Woodcroft and Dave Manson, but can he sustain this level of play over a full season? By NHL_Sid
3 months ago
It’s quite evident that the Edmonton Oilers markedly improved ever since their coaching change.
In early February, the team sat outside a playoff spot under Dave Tippett and Jim Playfair. Once they were replaced with Jay Woodcroft and Dave Manson, the team held an excellent regular-season record of 26-9-3, ranking third in the entire league during that span, and the team went on to advance to the Western Conference Finals in the post-season.
Nearly every player saw a considerable improvement in their even-strength results subsequent to the arrivals of Woodcroft and Manson. Multiple players thrived under this new system, but one of the players that benefitted the most from the coaching change was defenceman Cody Ceci.
Under Woodcroft and Manson, Ceci was primarily deployed on the top defence pairing with Darnell Nurse, and that duo was exceptional. They played a major role in Edmonton’s strong performance under their new coaching system.
In the regular season at 5v5, the team out-scored the opposition at a ratio of 25 – 22 with Nurse and Ceci on-ice and held a superb 54% expected goal differential.
The high-danger chance results were even better, as the ratio of high-danger chances was 120 – 75 in favour of Edmonton with Nurse and Ceci, equating to a marvellous 62% high danger chance differential.
These results are more impressive upon considering the fact that the duo consistently faced the toughest matchups on a nightly basis.

Elite competition is essentially defined as a team’s top forward lines and top defence pairs. With Woodcroft, Darnell Nurse played over half (!) of his TOI against elites, while Ceci played 45.7% of his TOI against elites. Over this time span, Nurse ranked first in the league in Elite TOI%, while Ceci ranked third.
Ceci was ahead of numerous top-pairing defencemen in TOI% spent against elite competition this season, which includes players such as Cale Makar (34.9%), Victor Hedman (35.4%), Adam Fox (34.5%), Jaccob Slavin (36.1%), and so on.
Most importantly, Ceci’s results were excellent in this difficult role. He ranked 2nd on the team in relative DFF% against elites, meaning the team consistently out-chanced top opposition with Ceci on-ice.
Furthermore, Ceci ranks first on the team in DFA/60 after a defensive-zone shift start; put differently, no Oilers defenceman allows fewer chances than Ceci after taking a shift start in the defensive zone. Ceci is a fairly average entry defender, but he’s Edmonton’s best in-zone defender. He was a major help to Darnell Nurse in this facet, who ranked second last on the team in DFA/60 after a DZ Shift Start.
Some may argue that increased playing time with Connor McDavid played a role in the improvement of his results, and while it certainly did, Ceci’s metrics without McDavid were still strong. Without McDavid and under Woodcroft, Ceci’s expected goal differential (51%) still remained at a positive, and his high-danger chance differential was at a superb 56%.
Woodcroft and Manson deployed and trusted Ceci in a difficult environment, and Ceci certainly made the most of it.
In the post-season, Nurse and Ceci continued to play as a pair in essentially every game. Ceci led the team in defensive zone breakups per 60, and ranked 2nd in zone denials per 60, just behind Brett Kulak. For the most part, Ceci’s microstats were encouraging.
However, Ceci’s on-ice defensive results were still poor, and it was primarily due to Nurse’s injury. Nurse played through a torn hip flexor in the playoffs, and his performance declined, as the pair of Nurse and Ceci were consistently burned off the rush by Colorado’s blistering speed and skill. Ceci just couldn’t cover up for Nurse’s constant errors enough.
As a result, it’s somewhat unfair to use their substandard post-season performance as an indicator of their true abilities, as Nurse and Ceci were genuinely an exceptional pair when Nurse was healthy.
Going back to the major question; can Ceci’s strong play since the coaching change (when Nurse was healthy) sustain over the entirety of 2022-23?
Firstly, let’s take a look at Ceci’s exact results before and after the arrivals of Woodcroft and Manson. 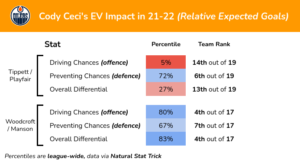 *Note: Expected goals/scoring chances are used here, due to the variance and randomness of goal differential in limited samples
Under Tippett, Ceci was generally reliable defensively, primarily playing on the second pair. However, Ceci’s offensive results were dreadful. With Tippett and Playfair’s system, Ceci’s offence was non-existent, and he didn’t portray much offensive potential in any sense.
Following the hirings of Woodcroft and Manson, Ceci’s offensive metrics significantly improved. He ranked first among the team’s defence core in driving on-ice scoring chances, and fourth on the entire team, overall.
Ceci wasn’t always a direct contributor to the team’s offence, but he performed well as a supporting/complimentary defencemen that consistently helped with breakouts and transition. Ceci’s rate of zone entries, zone exits and offensive zone shot assists all improved with the new coaching staff.
The defence did slightly decline, but something to note is that Natural Stat Trick’s relative metrics do not account for the quality of competition (statistical models such as EvolvingHockey’s RAPM attempt to adjust for both teammates and competition, but you cannot filter RAPM results by date or by coach, which is why I used simple relative metrics here).
Consequently, it’s impressive that his unadjusted defensive metrics stayed relatively the same, considering the fact that Ceci played top competition at a significantly higher rate under Woodcroft and Manson.
In the regular season, Ceci played a total of 40 games under Tippett/Playfair, and 39 games under Woodcroft/Manson. Evidently, both sample sizes are nearly identical. To dive deeper, here’s a glance at Ceci’s even-strength results in 2019-20 and 2020-21. 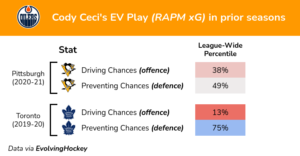 Ceci faced a lot of backlash in his tenure with Toronto, largely due to his overpaid $4.5M contract value. However, I feel that it was slightly undeserved, as his defensive results were quite good.
Of course, he was evidently subpar on the offensive side, and again, he was overpaid, but Ceci genuinely excelled at suppressing high-quality shots in Toronto. He was a reliable defensive defenceman, and wasn’t terrible like many Toronto fans claimed.
In 2019-20, Toronto allowed 2.2 goals per hour and 2.3 expected goals per hour with Ceci on-ice.
Without Ceci, they allowed 2.9 goals per hour and 2.5 expected goals per hour. Ceci wasn’t perfect, and occasionally made glaring errors, but simply put, the Leafs were a superior 5v5 defensive team with Ceci on ice.
In Pittsburgh, however, Ceci’s impact on scoring chances and possession was exceedingly average. Ceci did go on a PDO heater (PDO is a proxy for puck-luck, and is often the cause for an inflated or underachieving goal differential), as the Penguins out-scored the opposition at an impressive ratio of 41 – 28, equating to a 59% goal differential.
This was unsustainable, and his GF% declined under both coaches in Edmonton (with that said, his GF% was at 51% under Woodcroft, which is still strong). Ceci wasn’t necessarily bad in any sense at all in Pittsburgh, but aside from that PDO heater, not much stood out in an extremely positive manner.
In regards to experience against elite competition in prior seasons; in Toronto, Ceci ranked third among the team’s defencemen in Elite TOI%, and fifth in Elite TOI% with Pittsburgh. This is the expected deployment difficulty for the average top-four defenceman, but Ceci didn’t play elites at the level of a top-pairing defenceman as he did with Woodcroft/Manson.
However, Ceci did rank 2nd among Toronto D in relative DFF% against elites, ranking ahead of multiple Leafs defencemen such as Morgan Rielly and Jake Muzzin. He also remained a net positive in Pittsburgh in this aspect. Although Ceci’s deployment was never exceedingly difficult prior to his stretch of games with Edmonton’s new coaching staff, Ceci has shown in the past that he has the capabilities to reliably play against elite competition. 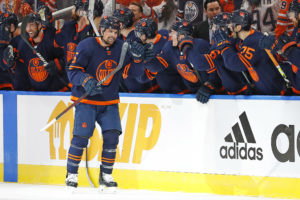 May 14, 2022; Edmonton, Alberta, CAN; The Edmonton Oilers celebrate a goal by defensemen Cody Ceci (5) against the Los Angeles Kings during the second period in game seven of the first round of the 2022 Stanley Cup Playoffs at Rogers Place. Mandatory Credit: Perry Nelson-USA TODAY Sports
Overall, with all of this data in mind, Ceci’s results prior to the arrivals of Woodcroft/Manson suggested that he was a solid defensive #4-5 defenceman.
He generally played at that level under Tippett and Playfair, but with Woodcroft and Manson, Ceci’s results were exceptional while playing in a very difficult 1RD role, especially his on-ice offensive metrics.
The sample that suggests that Ceci can perform well at both ends of the ice in a top-pairing role is 39 games under Woodcroft/Manson. This is in opposition to a sample of 159 games worth of fairly recent data, (109 games from 19-20 – 20-21 plus 40 games under Tippett) that suggest Ceci is a good #4-5 defenceman.
It’s fair to expect Ceci to regress to an extent; his results on the top-pair since the coaching change were outstanding, and I’m highly doubtful if they last at that level. His defensive metrics should sustain, but Ceci hasn’t shown signs of driving scoring chances at a high rate in prior seasons. His offensive skillset isn’t spectacular, and his past offensive results have varied from below-average to abysmal.
Furthermore, Ceci never played at this level against elite competition in the past. It’s a difficult task for any NHL defencemen to consistently play on the top pairing of a contender, and perform well against top opposition on a nightly basis. Only a handful of elite defencemen throughout the league have demonstrated the ability to accomplish this.
With that said, Ceci’s defensive track record is fairly solid, and regardless of usage, history indicates that he can reliably perform well against elites. Ceci won’t play at the level of a strong 1RD, and his on-ice offensive results will likely decline, but it’s reasonable to expect him to continue to perform well as a defensive defenceman in the top-four.
Ceci generally played at this level in 2019-20, and his defensive results were fine under both of Edmonton’s coaches. He was an excellent fit with Darnell Nurse, and spending more time with Dave Manson throughout an entire season should help. Ceci could also pair alongside Brett Kulak to form a shutdown defensive pair.
Playing at the level of a reliable #4 is a reasonable expectation for Ceci, although I do think he has the ability to exceed that expectation.
There are several uncertainties and questions regarding the potential performance of Edmonton’s current defence core and goaltending, as they head into 2022-23. Ceci was a key contributor to Edmonton’s resurgence under Woodcroft, and he will have to continue to perform well in a top-four role throughout the entirety of this upcoming season to help that success continue.
*All microstats via Corey Sznajder, all other stats via PuckIQ, Natural Stat Trick, and EvolvingHockey
Find me on Twitter (@NHL_Sid)
Nation Takes
Oilers Talk
Recent articles from NHL_Sid