Connor McDavid is due to go on a tear 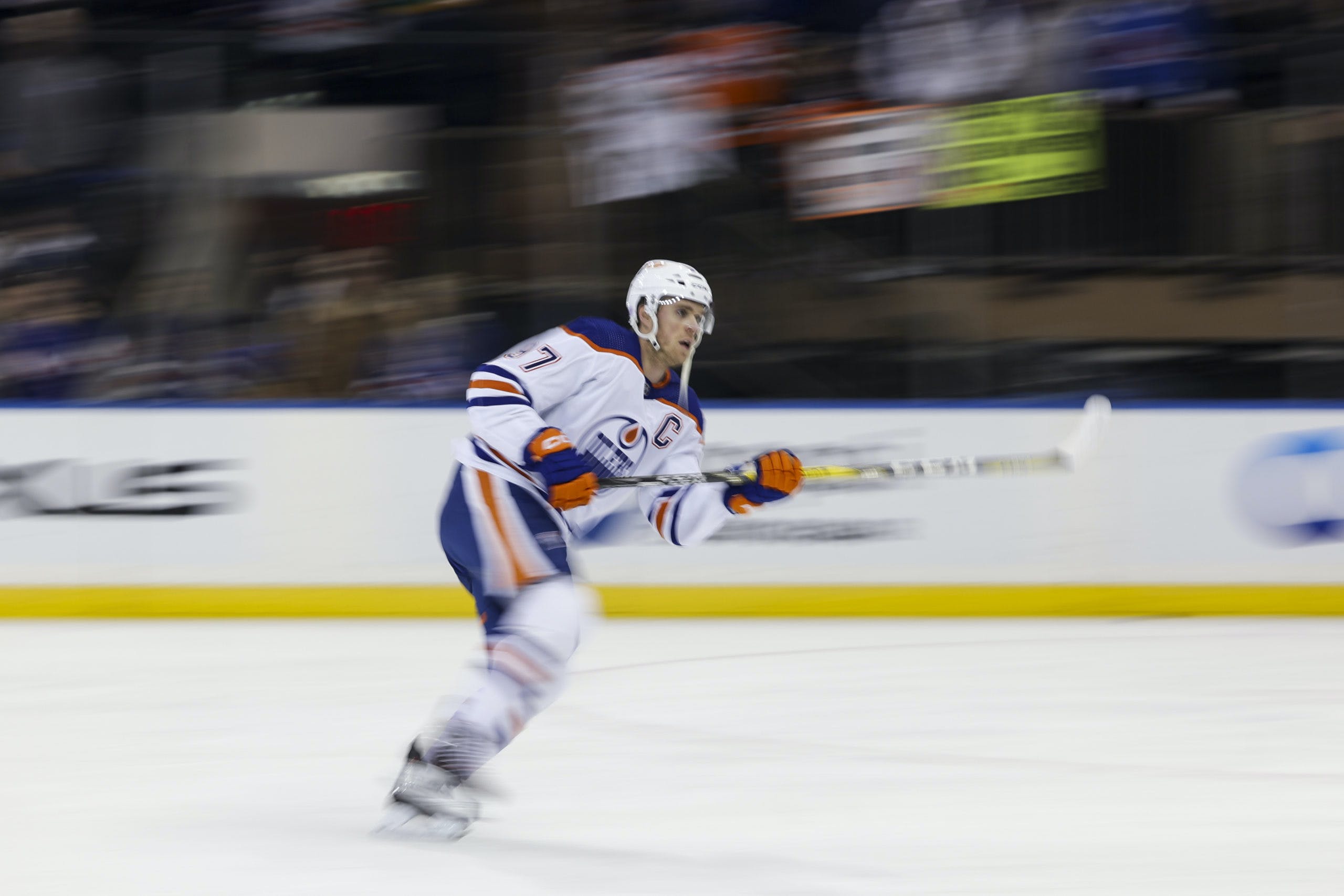 By Zach Laing
1 month ago
Last night, hockey analytics account JFreshHockey posted about Connor McDavid’s 5×5 production this season.
As he pointed out, McDavid had a three-point night against the Florida Panthers, all of which came in non-5×5 situations. His goal came on the powerplay. He assisted on Evan Bouchard’s goal at 6-on-5, and he set up Leon Draisaitl for the overtime winner.
JFresh also pointed out how McDavid’s deep down the list of 5×5 scoring this season, but offered no context behind it, so let’s add a little bit, shall we?
First and foremost, Connor McDavid has been the most productive forward at 5×5 over the previous three seasons, and it’s not particularly close. Between 2019-20 and 2021-22, McDavid’s 164 5×5 points rank atop the league. Filling out the top five are Auston Matthews (155), Leon Draisaitl (150), Mitch Marner (138) and Artemi Panarin (136).
This season, McDavid’s got just 11 5×5 points in 22 games. Auston Matthews, for comparison, has only one more 5×5 point than him in two more games played. Draisaitl has just nine, Marner has 16, and Panarin has 13.
The underlying numbers have not been kind to McDavid this season. With him on the ice at 5×5, the Oilers have scored just 14 goals this season for a per 60 rate of 2.37. Last season, the Oilers scored 3.3 goals per 60 at 5×5. In 2020-21 they scored 4.09. In 2019-20, they scored 3.52. I think you see where I’m going with this.
Over those previous three campaigns, with McDavid on the ice, the Oilers scored on 10.56 percent of the shots taken. This year? They’ve scored on just 6.8 percent of their shots taken. If, for example, the Oilers had been shooting 10.56 percent from previous years this year, the Oilers would have scored 21.7 goals with McDavid on the ice this year.
So we’re looking at a difference of roughly six goals. Given that McDavid over those previous three seasons had contributed to 82.5 percent of the goals scored while on the ice, McDavid should have scored 17.325 5×5 points this season, based on previous averages.
17 points this season would rank him tied for fourth in the league in terms of raw 5×5 production.
So what’s to contribute to McDavid producing less at 5×5 this season? Well, there are a lot of things. First, the Oilers are missing two players in their top six. Evander Kane and Kailer Yamamoto have missed significant time this season due to their varying injuries. Yamamoto, before he was injured on Nov. 8, was having a tough start to his season in terms of 5×5 production.
Draisaitl’s 5×5 production is down to start the year with him seeing a similar fate to that of McDavid. While Zach Hyman is scoring more this year than before, Ryan Nugent-Hopkins is still scoring at what’s been average for me. Jesse Puljujarvi, however, has had some real struggles getting on the scoresheet. He, nor Yamamoto, are to blame, however.
People will try to cry afoul about McDavid’s insane production on the powerplay. Here are the top five powerplay point producers in the NHL over the previous three seasons: McDavid (124), Draisaitl (117), Huberdeau (91), Victor Hedman (84) and Nathan MacKinnon (83).
If teams want Connor McDavid to stop scoring points on the powerplay then I would simply stop taking penalties against the oilers. It’s not that hard.
Nonetheless, McDavid continues to be the best, most advanced, most offensively gifted player to play the game. If there’s one thing. He’s scored at consistent rates over the course of his career, and while things may look bleak looking at raw 5×5 production right now, there’s very much reason to believe he will bounce back sooner, rather than later. Just look at what’s happened with Evan Bouchard.
And when McDavid, who is already leading the league in scoring with 39 points, he’s going to separate from the pack even further. 150 points, or more, is very much within reach.
Zach Laing is the Nation Network’s news director and senior columnist. He can be followed on Twitter at @zjlaing, or reached by email at zach@oilersnation.com.
Featured
Nation Takes
Oilers Talk
Recent articles from Zach Laing