Does Jake McCabe make sense as a trade target for the Edmonton Oilers? 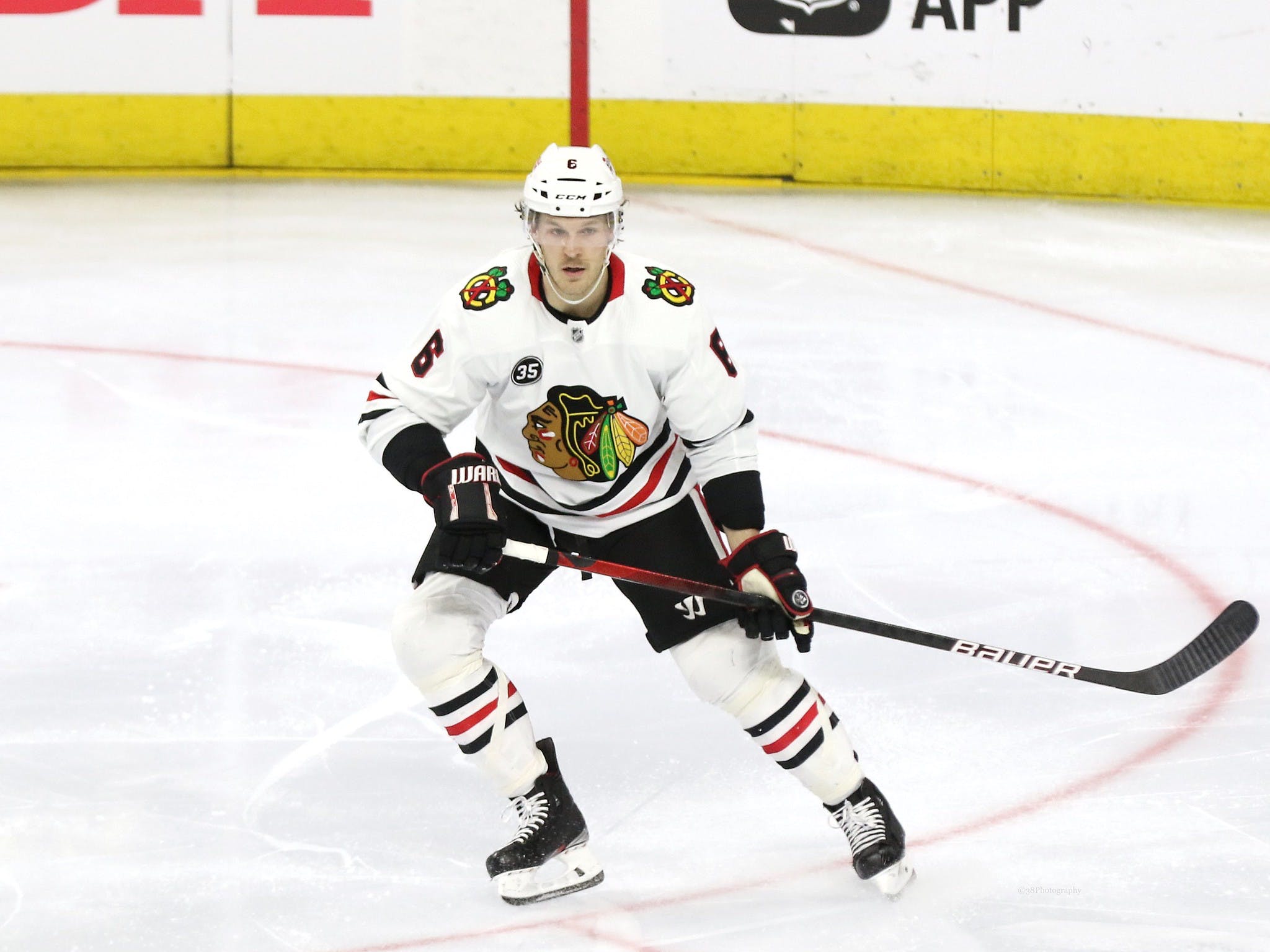 By Zach Laing
25 days ago
Elliotte Friedman dropped an interesting news nugget Saturday night: the Edmonton Oilers could be interested in defenceman Jake McCabe.
He dropped the note during a 32 Thoughts segment on Sportsnet speculating on if he could make sense for the Oilers. The 29-year-old left-shot defenceman has two years after this remaining on a deal paying him $4-million per year. He’s been a minute muncher for the Chicago Blackhawks for the last two years averaging a shade under 20 minutes per night, and there’s a world where he makes sense as a target for the Oilers.
First and foremost, he’s not the biggest defenceman in the world but he has a bit of size to him. He stands 6’1″ and 204 lbs, and has always been a physical player. This year alone he’s laid 7.14 hits per hour at 5×5, which would rank second among Oilers defencemen behind Markus Niemelainen (15.86) and ahead Evan Bouchard (5.06). His 7.02 5×5 shot blocks per hour, meanwhile, would far and away rank first on the Oilers, well ahead of Brett Kulak’s 4.99.
He’s a physical, defence-first defenceman and that’s something the Oilers need. While he is a left-shot, he can also play the right side which could be a big help for deployment and he can even chip in a little offence, too. This year he has seven 5×5 points in 32 games, which would rank fourth behind Tyson Barrie, Brett Kulak, Evan Bouchard and Darnell Nurse. Last year McCabe’s 20 5×5 points would’ve been tied for third with Nurse and behind Cody Ceci (21) and Bouchard (31).
The raw numbers and individual production look good for McCabe, and there are things to like when looking at his underlying numbers, too.
His raw shot attempt suppression rates aren’t great, but a lot of that has to do with the Blackhawks being a truly terrible team. Relative to his teammates, the Blackhawks take 2.82 more shot attempts per hour with him on the ice at 5×5 and allow 3.1 less shot attempts against per hour. We see this trend continue looking at his goal impacts (+.57 GF/60, -1.68 GA/60, +21.61 GF%Rel) and in his expected goal numbers (+.15 xGF/60, -.43 xGA/60, +5.49 xGF%Rel). His PDO is slightly inflated at 101.3, so there’s reason to expect his goal-scoring rates could dip a little bit. As a whole, however, these trends hold true amid his 2021-22 season with Chicago. The sample size is good.
I’m comfortable saying McCabe would be a much better target for the Oilers than than of Joel Edmundson, or even Vladislav Gavrikov.
So the biggest question therein lies in two parts: 1) what is his acquisition cost, and 2) would Chicago eat money on the deal. These are questions we don’t have inklings of at this point in time.
McCabe has two years left on his deal, so there would be a commitment from the Blackhawks to eat money beyond this season. As we all have seen, there’s a cost teams have to pay for others to retain money on deals. Would Chicago eat 50% of the deal if the Oilers sent out their first-round pick?
Chicago has $10-million in cap space today, $44.5-million in projected space next season, and $69.6-million in cap space in 2024-25. They have only two players on their active roster signed beyond that season, so there are lots of decisions to be made.
It’ll be interesting to see how the next two months shake out.
Zach Laing is the Nation Network’s news director and senior columnist. He can be followed on Twitter at @zjlaing, or reached by email at zach@oilersnation.com.
Featured
Oilers Talk
Recent articles from Zach Laing