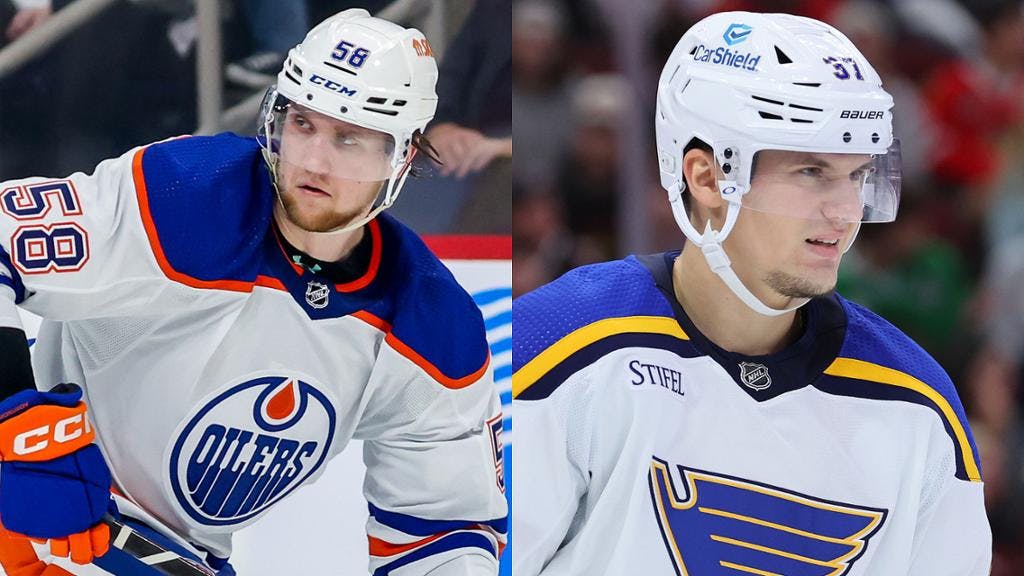 By Liam Horrobin
3 months ago
A couple of weeks ago, notification bells rang around the city. “The Edmonton Oilers have traded defenceman Dmitri Samorukov to the St Louis Blues in exchange for forward Klim Kostin.” From there, we all Googled Klim Kostin immediately to find out he’s a former first-round pick and could actually help out on the depth chart. Not a bad return for a player like Samorukov that likely would’ve continued to struggle in his pursuit to crack the NHL team.
Outside of being big, Klim Kostin comes with a little bit of NHL experience. With 46 games played with St Louis last season, Koskin got his first extended taste of NHL action while also scoring five goals and eleven points. Along with that time spent in the NHL, he has many more games played in the American League where he’s mostly been a productive player. Since getting drafted in 2017, Kostin played in 197 AHL games in the Blues organization before joining the Oilers in early October. With now five more games under his belt with the Condors this season, he is one of the more experienced players on a young Bakersfield team.
While it hasn’t been the red-hot start Klim Kostin would’ve wanted, he’s had a reasonably good start in his time with the Condors. In five games, he’s got a goal and an assist to his name, along with 13 penalty minutes while playing in an array of different situations. Plus-minus isn’t always a stat that fans take too seriously, however, he is -5 on the season, which leaves more to be desired.
On the other end of the deal. Dmitri Samorukov was the player heading the opposite way in the Kostin deal. He was in the Oilers organization for six years after being drafted in the third round, and he became a pivotal part of the Condors’ success in recent years. However, the opportunity came and went for the former third-round pick in Edmonton, which led to the decision to move him along. Since leaving the organization, Samorukob has played in five games, all with Springfield, scoring one goal and has a plus-minus of two.
While this trade is a small one in the grand scheme of it all, the Oilers got themselves a player with valuable NHL experience that may contribute to the NHL club if injuries arise. Kostin adds depth to the organization, which will certainly help them down the road and possibly in the playoffs depending on how the year plays out. And even though the numbers don’t look great right now for him, time is on Kostin’s side as it seems like only a matter of time before he gets his chance with the big club.