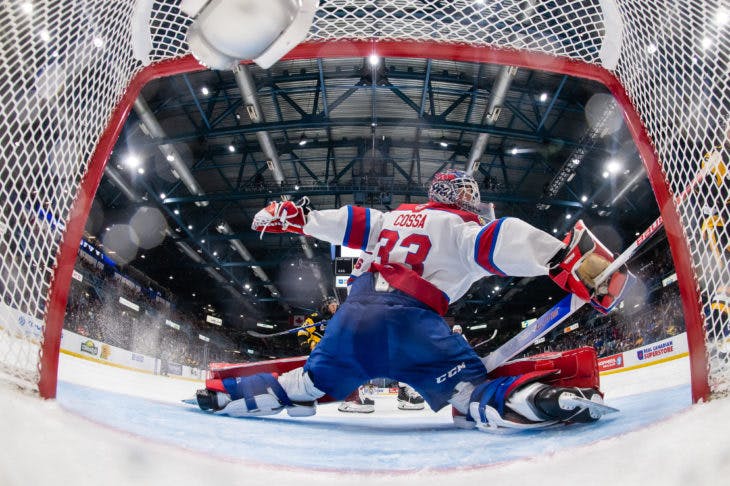 By Zach Laing
5 months ago
The Edmonton Oil Kings have been eliminated from the Memorial Cup.
The team was knocked out of the round-robin tournament on Friday falling to the OHL’s Hamilton Bulldogs 4-2.
Edmonton exits the tournament with a 0-1-0-2 record securing just two standings points. They opened the tournament last Tuesday falling to the Shawinigan Cataractes in a game where they blew a 3-2 lead allowing two third-period goals.
On Wednesday, they took on the St. John Sea Dogs where they took them to overtime securing their lone win of the tournament. And on Friday, they fell 2-1 in the first period against the Bulldogs, but couldn’t overcome the deficit.
“I thought that was our best game of the tournament,” said defenceman Luke Prokop via the Oilers team site. “I thought we had an extremely strong push in the second half. We knew we didn’t have to win the game, we just had to tie the game and send it to overtime, and there were a bunch of chances that were just an inch away or guys just missed on the sticks.  I’m so proud of the group in there. We had a hell of a run.”
Oilers prospect Xavier Bourgault‘s tournament stays alive, however. He’s scored two goals and six points, and his Cataractes will take on the Bulldogs Monday night in a semi-final showdown.
Zach Laing is the Nation Network’s news director and senior columnist. He can be followed on Twitter at @zjlaing, or reached by email at zach@oilersnation.com.
Nation Takes
News
Oilers Talk
Recent articles from Zach Laing