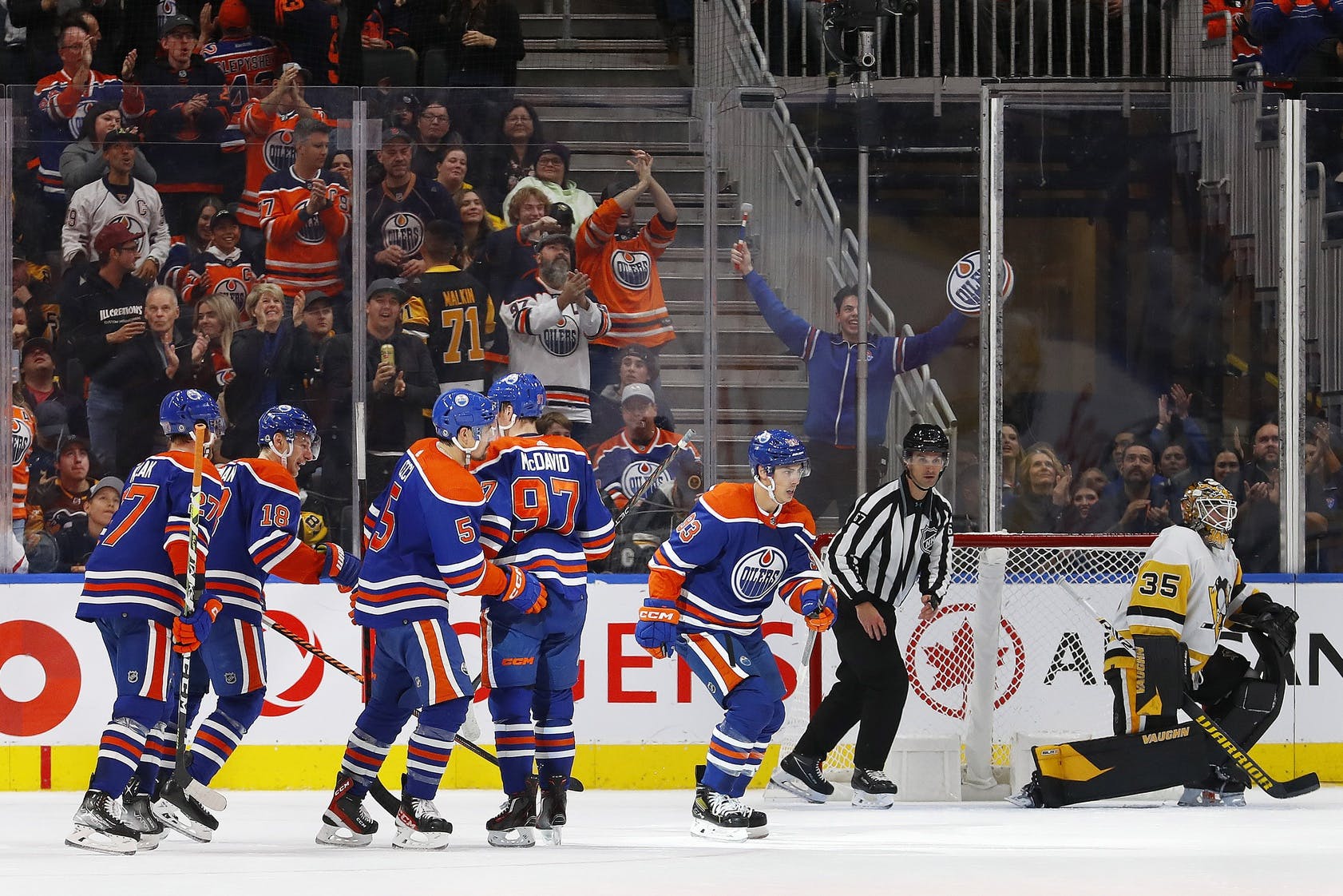 By Robin Brownlee
3 months ago
Good teams find a way to take inspiration where they can get it, and the Edmonton Oilers certainly needed some of that Monday on the way to a 6-3 win over the Pittsburgh Penguins at Rogers Place.
First, the Oilers got an earful from coach Jay Woodcroft – which is something that doesn’t happen often – during the first intermission trailing 2-1 after being outplayed and outshot 19-9 by the Penguins during yet another substandard start.
Then, down 3-1 two minutes into the second period, you could hear a pin drop when captain Connor McDavid hobbled off the ice and down the tunnel after former Oiler Jeff Petry pitched him into the goalpost on a rush to the net. Just like that, it seemed the Oilers were staring at a 2-4-0 start in a six-game homestand to open the season. Well, not so fast.
The Oilers not only narrowed it to 3-2 on the ensuing power play without McDavid on a goal by Tyson Barrie, they pumped a blizzard of rubber at Tristan Jarry, including a team record 26 shots in the second period, the rest of the way and scored five straight goals in the kind of turnaround you don’t see very often.
McDavid wasn’t off the ice long — just long enough for Leon Draisaitl, Evander Kane, Ryan Nugent-Hopkins, and Zach Hyman to take the wheel and send the Oilers packing for a three-game road swing through St. Louis, Chicago and Calgary feeling better about themselves than it looked like they might.

“That’s on the players,” Woodcroft said in reference to what was discussed during the first intermission. “The players were the ones who decided to get it together a little bit. There were some things in the first period that we wanted to clean up as a team, but the players are the ones that go out and do that.
“That’s full credit, full marks to our players for playing probably our best period of the year in the second period. That set us up for success tonight, so full marks to our guys.”
Woodcroft decided to keep Draisaitl between Kane and Kailer Yamamoto after McDavid returned and the Oilers just kept on rolling. Kane scored the 3-3 goal and also had a team record nine shots on goal. Draisaitl scored the 5-3 goal on a sweet backhand move and added two assists. Nugent-Hopkins scored what would stand up as the winner, making it 4-3 on a feed from Hyman, who opened the scoring.
“The impetus was after that power-play goal, and it was out of necessity,” Woodcroft said. “It was just a gut feel, but I liked what I saw in the shift that they played together.
“When Connor came back and we talked it over with our coaches, we felt it was best to keep that line together. We thought they did a good job on (Sidney) Crosby’s line the rest of the night. Full marks to those three because they played a heck of a game.”

Let’s be honest here, what we saw against the Penguins isn’t how you draw it up. It isn’t what you’d call a game plan. Falling behind early and seeing your best player heading down the tunnel injured never is. What unfolded was the best possible response a coach can hope for when things have gone sideways, as they most certainly had when it was 3-1. That, with two points, works just fine.
Editorials
Featured
Oilers Talk
Recent articles from Robin Brownlee