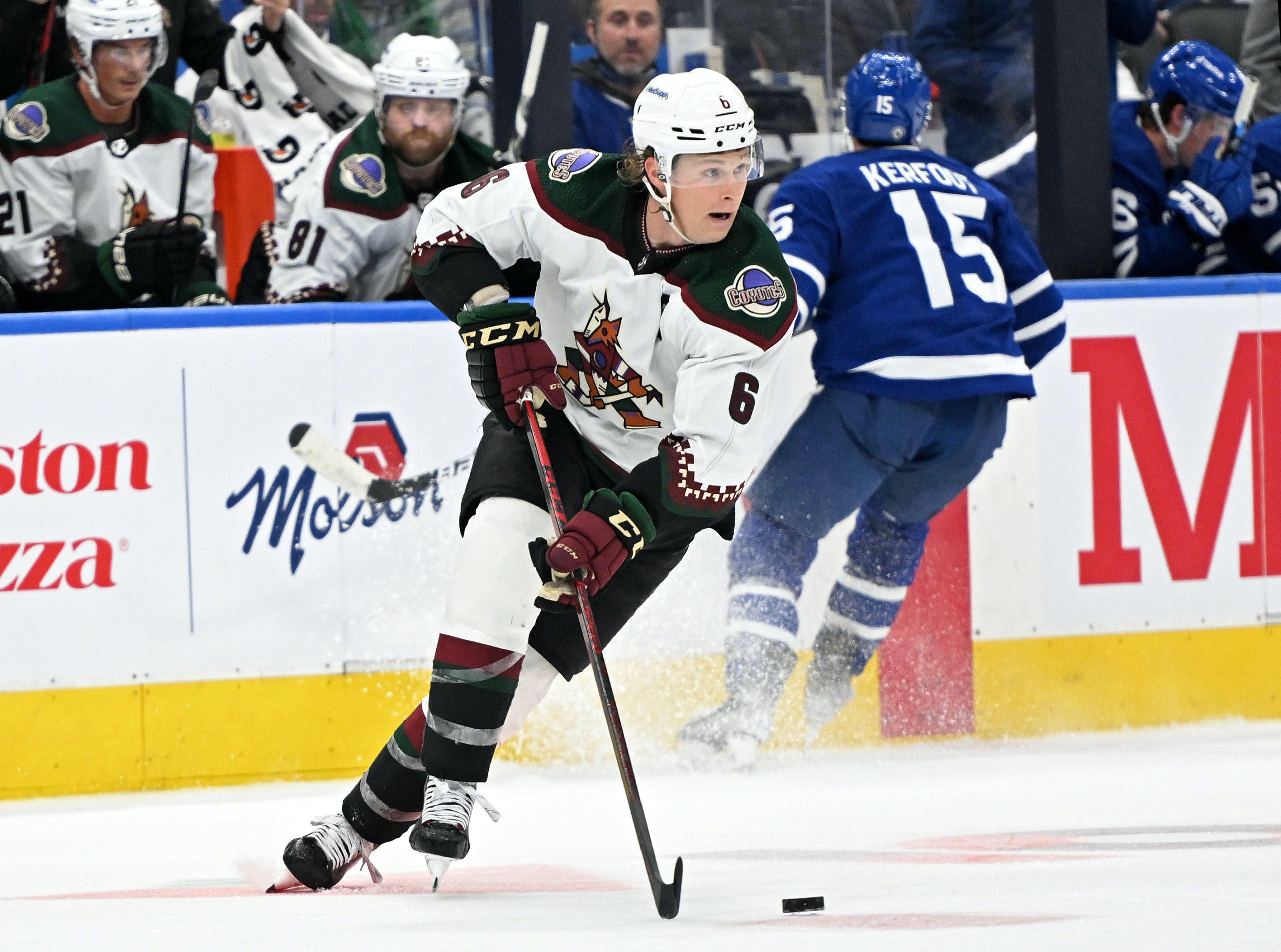 By Zach Laing
4 months ago
Fire the rumour mill back up.
The Edmonton Oilers are among a list of at least six NHL expressing interest in Arizona Coyotes defenceman Jakob Chychrun.
This, according to TSN’s Darren Dreger, who reported Thursday that the asking price for the star has come down from last year.
Here’s what Dreger had to say, as transcribed by TSN:

There’s no secret that Jakob Chychrun still wants out of the Arizona Coyotes, but the Arizona Coyotes still tell everybody that they’re willing to be patient. Although what is clear now as the regular season is fast approaching is that the trade interest in Chychrun is once again intensifying. Some say that the Coyotes have softened to some degree at least in their expected return and are more willing now to take on a contract or contracts. Granted, you’ve got to have a first-round draft pick, you’ve got to have a prospect involved in all of this, so the ask is still high. Now some of the teams that are listed with interest include the Ottawa Senators, the Toronto Maple Leafs, the Edmonton Oilers, the Los Angeles Kings, the St. Louis Blues, the Columbus Blue Jackets and on and on it goes. However, it is a challenging one. Despite the quality of player and the contract, there’s some cap hurdles that many of teams I just mentioned are going to have to overcome.

You know who has a first-round pick, contract or contracts, and prospects? The Edmonton Oilers do.
The biggest selling points around Chychrun, a top-four defenceman, are the fact he has three years remaining, including the upcoming season, on a deal paying him just $4.6-million. For an Oilers team that is tight to the cap as they await it’s rise, Chychrun makes a ton of sense.
Last year, Chychrun appeared in 47 games scoring seven goals and 21 points while playing 23 minutes a night. Drafted 16th overall in the 2016 draft, he’s appeared in 337 games over the last six years with the ‘Yotes scoring 53 goals and 142 points.
His best season came in 2020-21 when he scored 18 goals and 41 points in 56 games while garnering a handful of Norris Trophy votes.
Analytically, Chychrun is coming off a down year at 5×5 but posted strong shot attempt share, expected goal share and scoring chance shares relative to his teammates. He was, however, bit by some bad luck with a 97.1 PDO and a .8921 on-ice save percentage. These down years don’t last.
Chychrun’s offence dipped last year from where it’s been, according to hockeyviz.com. Last season he contributed offence at a five percent rate below league average and defence at a four percent rate above average. Chychrun, a left-shot defenceman, generated lots of shots from the left side of the blue line.
While the Oilers’ forward group is as deep as it’s been in years, there are still question marks on the backend. Will Cody Ceci be able to replicate the success he had last year? Will Evan Bouchard take a step forward this season? Can Brett Kulak perform playing more minutes? Will the duo of Philip Broberg and Tyson Barrie be able to tread water?
Bringing in Chychrun, who has shown an ability to have success against elite competition in the past, may not solve all of those questions, but it would help provide that much more stability. It could bump Kulak down the lineup and Broberg to the right-side allowing the rookie to have more help in the defensive zone. It would allow Bouchard to still be paired with a defenceman who is responsible in his own zone.
In order for the Oilers to consummate a deal, it would obviously mean parting with their first-round pick this year — something that’s been as treasured to the organization as my Buzz Lightyear toy was to be as a child. Getting over what would be a tough breakup with draft capital would also require high-end, or multiple mid-range prospects to go back the other way. In this kind of a deal, it would also mean the Oilers need to send money back the other way.
In order to make the money work, the Oilers would likely need to send Tyson Barrie back the other way. The other option would be trading two forwards whose salary adds up to over Chychrun’s $4.6-million cap. Jesse Puljujarvi, Warren Foegele, Derek Ryan, Mattias Janmark and Devin Shore would be likely candidates.
If the Oilers are serious about taking a run at the Stanley Cup in the next three to four years as they appear to be, bringing in a young, cost-controlled, high-end defenceman like Jakob Chychrun would be a piece that could help put them over the top.
I wouldn’t hang up the phone until the Coyotes said yes.
Zach Laing is the Nation Network’s news director and senior columnist. He can be followed on Twitter at @zjlaing, or reached by email at zach@oilersnation.com.