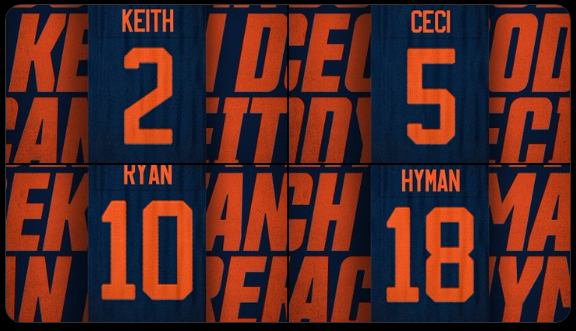 By Zach Laing
1 year ago
The Edmonton Oilers have announced the numbers for the players joining the team.
Duncan Keith will wear number 2 for the team this year, the same number he wore with Chicago. The numbers has been worn by 14 players in Oilers history, most recently Andrej Sekera and Jeff Petry, while Lee Fogolin was the first to don the number from 1980-87.
Cody Ceci will wear number 5 with the Oilers going back to his original number worn with the Ottawa Senators. Twelve players have worn #5 in Oilers history, most recently Kevin Gravel, Mark Fayne, Mark Fraser and Ladislav Smid. It was first worn by Doug Hicks from 1980-82.
Derek Ryan will don number 10, the same number he wore with the Calgary Flames. Fourteen players have worn 10 in Oilers history, most recently Joakim Nygard, Chris Wideman, Nail Yakupov and Shawn Horcoff. The first to wear it was Ron Arenshenkoff in 1980.
Zach Hyman is hanging up the number 11 he wore in Toronto in favour of number 18 — a number worn by 13 players in Oilers history. Most recently, James Neal, Ryan Strome, and Ethan Moreau wore the number while Brett Callighen wore it first from 1980-82.
Lastly, Warren Foegele will wear the number 37 he wore in his first season in Carolina. Just 10 players have wore 37 in Oilers history most recently Lennart Petrell, Denis Grebeshkov and Michael Peca. It was first worn by Tom McMurchy in 1988.
Zach Laing is the Nation Network’s news director and senior columnist. He can be followed on Twitter at @zjlaing, or reached by email at zach@oilersnation.com.
Nation Takes
News
Oilers Talk
Recent articles from Zach Laing