The Future Between the Pipes 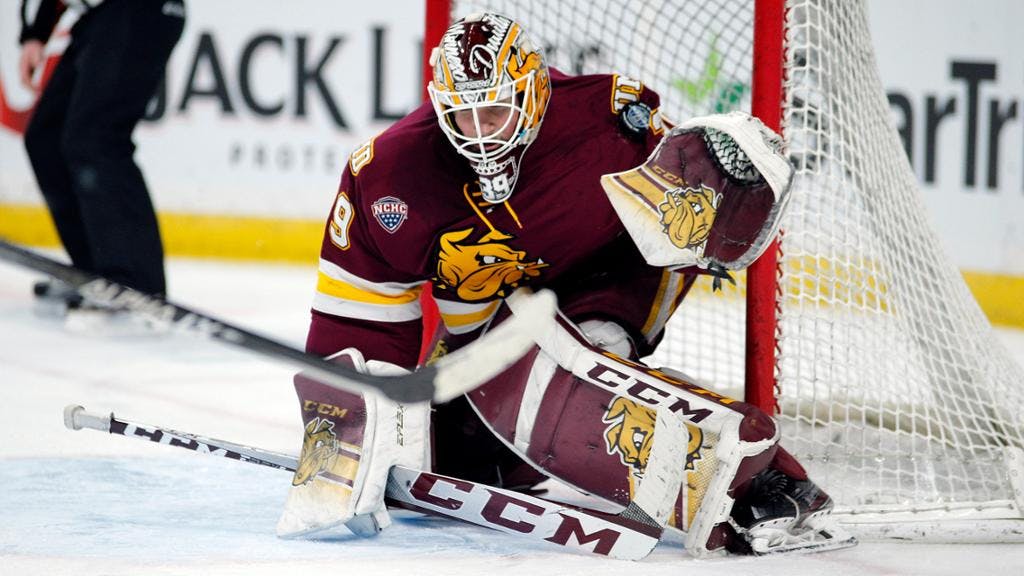 By Liam Horrobin
8 months ago
The goaltending depth throughout the Edmonton Oilers organization is thin.
They’ve got Mikko Koskinen and Mike Smith up here in Edmonton. Then Stuart Skinner, Ilya Konovalov and Olivier Rodrigue are in the minor league system with no prospects in junior hockey.
Edmonton had an opportunity to add a high-end goaltender, Jesper Wallstedt, at the 2021 NHL Draft. However, Ken Holland and his scouting staff went for Xavier Bourgault instead, who looks like he’ll be a good player.
Many think the Oilers missed the boat on Wallstedt, especially since they don’t have a goaltender around his age in the organization. His performance at the World Juniors didn’t help fans simmer down from the decision either, especially when Sweden played Slovakia.
It’s assumed that Edmonton didn’t take Wallstedt because they believe in Konovalov. The Russian goaltender is in his first season in North America with the Bakersfield Condors. He’s had an up and down year with a 0.893 save percentage in 16 games and carries a 4-7-5 record.
The first eight games weren’t good, with a 0.829 save percentage. However, Konovalov seems to have adjusted and improved with a 0.904 save percentage. He isn’t playing as much now with Stuart Skinner back with the Condors full-time.
Konovalov is now showing his worth which is reassuring after missing out on Wallstedt.
Yesterday, Holland added another goaltender to the minor league system. Ryan Fanti, from the University of Minnesota-Duluth, signed after their season came to an end over the weekend. Ironically, Carter Savoie ended his collegiate career after scoring the game-winner for the University of Denver.
Fanti turned pro after his junior year. He was one of the best goaltenders in the NCAA, posting a 0.923 save percentage and a 1.83 goals-against average in 37 games played. Only Dryden McKay (Minnesota State University Mankato) appeared in more games and posted a better save percentage than Fanti, which certainly makes him a prospect worth following. McKay is also two years older than him and had played 97 games in the NCAA before this season compared to Fanti’s 20 in total.
Fanti’s statistics have been consistent since his first year of junior with the Minnesota Wilderness in the NAHL. He posted a 0.917 save percentage in 75 games with the Wilderness and was named an assistant captain in his final season with them.
He’s joining the organization at a great time too.
Stuart Skinner has firmly established himself as the Condors’ top goaltender and potentially the future between the pipes in the NHL. Konovalov is the young understudy who looks ready to call the crease his next season.
Fanti can now settle into the group and learn what he needs to do without the pressures of performing in a game.
Additionally, with Koskinen coming off the books this summer and Skinner now eligible for waivers next season, the Oilers needed to add more depth.
And if one of the best young goaltenders in North America is available, you may as well snap him up.
Uncategorized
Recent articles from Liam Horrobin