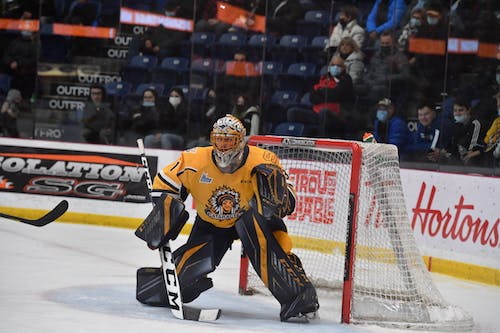 By Zach Laing
4 months ago
The Edmonton Oilers have invited goaltender Charles-Antoine Lavallée to their development camp.
Lavallée, 20, played last season with the QMJHL’s Shawinigan Cataractes alongside 2021 first-round pick Xavier Bourgault.
The 6’3, 190 lb. netminder appeared in 30 games last year posting an 18-8-1 record, a .912 save percentage and a 2.40 GAA. The Oilers would’ve had plenty of looks at him with Bourgault playing on the same team.
Lavallée was drafted into the QMJHL by the Moncton Wildcats, who dealt him to Shawinigan amid the 2019-20 season.
Ahead of the Memorial Cup this year, he was named a player to watch by Sportsnet draft expert Sam Cosentino, who had this to say of the player:

Similar to the last time Shawinigan was in the Cup, the ‘Cats come into the tournament with a two-headed monster in goal. Charles-Antoine Lavallée played more of the playoff minutes, but less in the regular season, although he lead the league with a 2.40 GAA. Antoine Coulombe was steady all season long, playing over 2,200 regular-season minutes with a .907% and a 2.73. Coulombe started the final game against Charlottetown, but was pulled in the second period only to have Lavallée come in to stop all 14 shots he faced to lead the ‘Cats to their first ever QMJHL title.