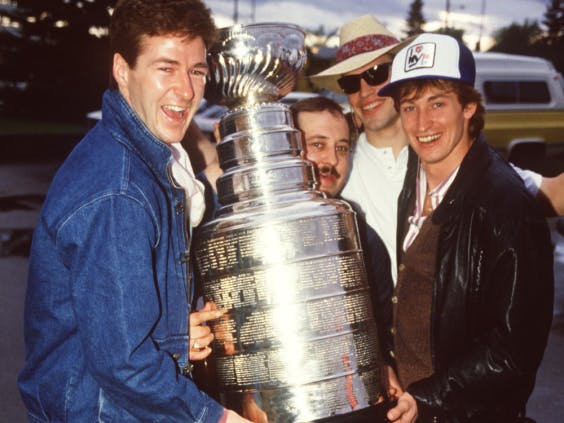 By Zach Laing
7 months ago
It was one of the toughest days in Edmonton Oilers history when the team traded Wayne Gretzky to the LA Kings.
Truthfully, the deal was a sale given the $15-million in tow the Oilers received from the Kings, but nonetheless, Gretzky was on the Spittin’ Chiclets podcast this week where he shared some behind-the-scenes information about The Trade.
According to Gretzky, there were four teams he was open to be traded to: the Kings, the Detroit Red Wings, the New York Rangers and the Philadelphia Flyers. All the while, none other than Nelson Skalbania, who sold Gretzky from the WHA’s Indianapolis Racers to Edmonton, was trying to court him to Vancouver.
Here’s some of what Gretzky had to say about the deal that started being put together after the 1988 Stanley Cup win over the Boston Bruins:

This whole thing started to transpire and [Edmonton Oilers owner] Peter [Pocklington] called me and said “Listen…” because I only had one year left on my deal and then I was an unrestriced free agent.
Basically we sat down and said, “Listen, you can trade me wherever you want but I’m not going to re-sign… so whatever they’re giving up to you won’t be worth anything if I don’t sign.”
We kind of got to a point where I knew they were going to trade me, but I was able to control where I was going to be moved to.
It came down to LA, Detroit, New York and Philly. Then New York and Philly kind of went away and we had sat down and decided we were going to Detroit.
I remember sitting there, “Okay this is great. I’m going to go to Detroit. I grew up a Red Wings fan, Gordie Howe, everything that goes with it.
And my dad called me and said, “Listen, I’m going to give you a little bit of advice.” He goes, “There’s only one Gordie Howe and Detroit is Detroit. You don’t need to go there. Why don’t you do something different and go to LA?’
Everybody thought it was my wife that steered the bus, but it was my dad who said “there’s only one Gordie Howe, you need to do something different.”

Gretzky also spent time talking about the early days of the Oilers, what it was like to have such a young team, how Glen Sather (more or less) threw them to the wolves, and the relationship between the fans and the team.
One of my favourite parts was Gretzky talking about how the Oilers once sold out the Coliseum for a charity reunion event and how the Stanley Cup was literally passed around the stands for fans to see.
All in all, it’s a must-listen for any fan of the Edmonton Oilers.
Zach Laing is the Nation Network’s news director and senior columnist. He can be followed on Twitter at @zjlaing, or reached by email at zach@oilersnation.com.
Nation Takes
News
Oilers Talk
Recent articles from Zach Laing