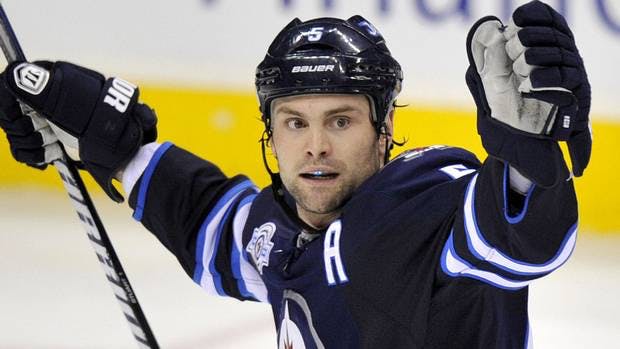 By Zach Laing
5 months ago
The Edmonton Oilers have hired former NHL defenceman Mark Stuart as an assistant coach, the club announced Tuesday.
A veteran of 673 games between the Boston Bruins and Winnipeg Jets, Stuart retired from the NHL with the latter of the two teams after the 2016-17 season.
He took off to the German DEL after and played a year with Adler Mannheim, but his career behind the bench came shortly thereafter.
Stuart joined the AHL’s Manitoba Moose in 2018-19 as a team manager, before being hired by the University of Vermont as an assistant coach in 2020-21. There, he worked under Todd Woodcroft, the brother of current Oilers head coach Jay Woodcroft.
Last year, Stuart joined the NCAA’s Colorado College, where he also worked as an assistant coach.
The 21st overall pick by the Boston Bruins in the 2003 draft joins assistant coaches Glen Gulutzan and Dave Manson, goaltending coach Dustin Schwartz, video coach Jeremy Coupal and video coordinator Noah Segall on the Oilers coaching staff.
The Oilers also announced they would be bringing back David Pelletier as the skating coach. It will be the former Olympian and gold medalist’s ninth season with the Oilers.
Zach Laing is the Nation Network’s news director and senior columnist. He can be followed on Twitter at @zjlaing, or reached by email at zach@oilersnation.com.