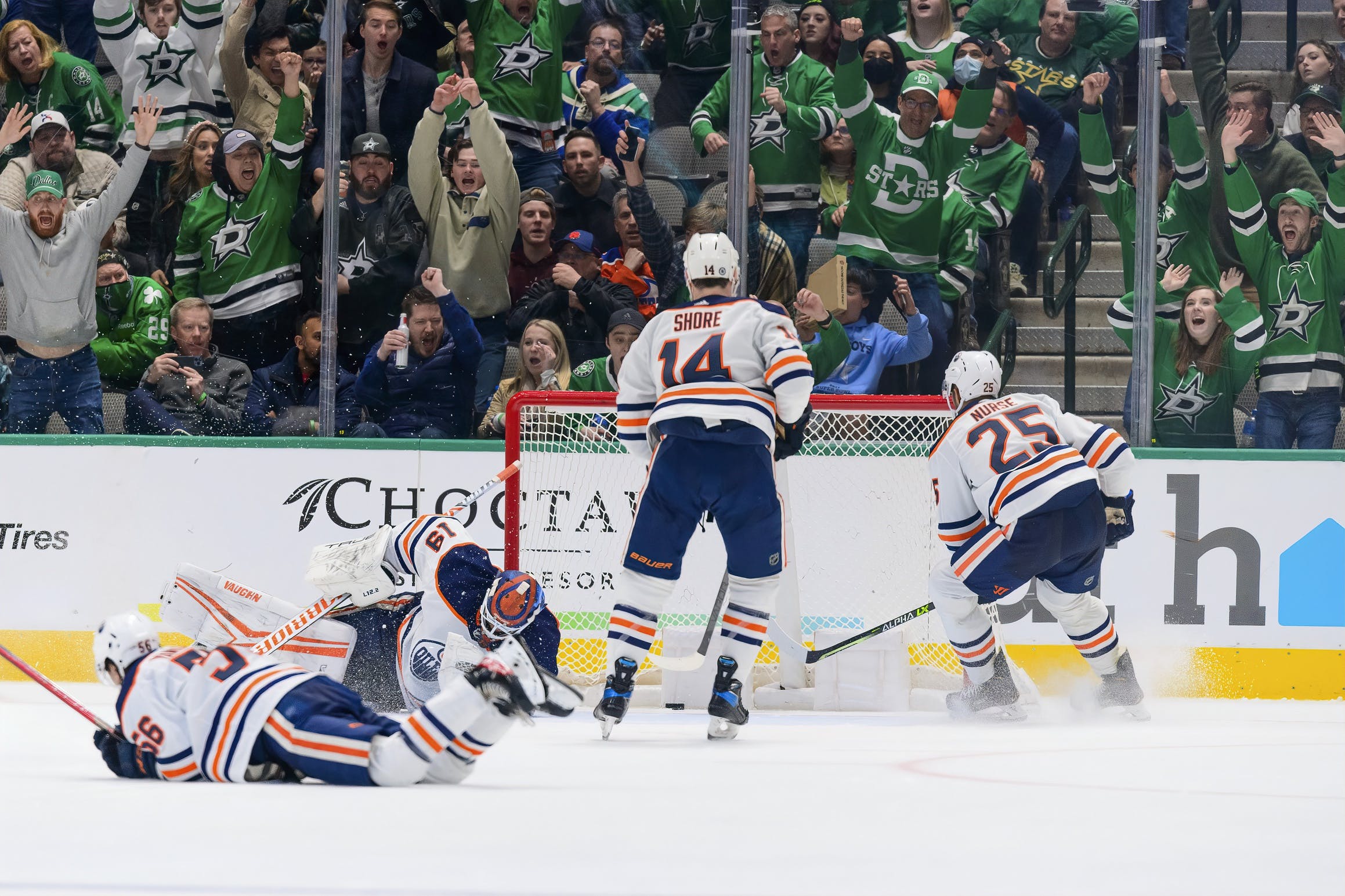 By Jason Gregor
7 months ago
Tough losses happen all the time. Coaches and players often talk about how they are learning lessons, and they are, but only if they choose not to repeat the same mistakes.
Since Jay Woodcroft arrived the Oilers haven’t had many tough lessons. They are 12-6-2 and have outscored teams 74-58 overall and 47-34 at 5×5. For the majority of the games they have played well. They had a few subpar performances against Montreal and Minnesota, but those weren’t tough lessons. They just played poorly.
Last night the Oilers were in control of the game with eight minutes remaining. Tyler Seguin took a tripping penalty and the Oilers’ PP could have put the game away, but they couldn’t register a shot on goal. They missed the net on three shots.
Then one minute after the penalty expired the Stars scored two goals in 24 seconds to take a 4-3 lead and eventually won 5-3 with an empty-net goal.
It was a tough loss. No question.
“It’s disappointing the way it ended for us,” said head coach Jay Woodcroft. “Obviously we’d like to have that last six minutes or so left back. Not our finest hour in that last six minutes. We’re going to have to learn from it and move on.”
If you wallow and fret about a loss too long it does no good. Woodcroft will show those clips tomorrow morning (players have today off), and then focus on their game against the Sharks. Woodcroft will also focus on things the team did well. Successful coaches don’t just harp on the negative, and I don’t expect Woodcroft will.
Let’s took at two goals.
The Oilers had four guys back at the blue line, which is what the coaches want, but they didn’t make great reads.
I saw some complaints about Nurse sliding over to the right. I asked former NHL defender Jason Strudwick what a D-man should do there.
“Nurse saw he had support, so sliding over to try and squeeze the forwards is what most D-men would do in that spot. People have to remember how fast the game is. You make split second decisions, and when you see you have support, sliding to his right is fine,” said Strudwick.
Shore and Yamamoto were in the right area, they just didn’t make the ideal read to allow Hintz to fly through the zone unimpeded. The Oilers have been excellent in their past 20 games of limiting chances off the rush, so seeing this was a bit surprising. I’d say it was more an outlier than the norm. Earlier in the season the Oilers gave up a lot off the rush, but having four guys back and getting exposed hasn’t been the norm with Woodcroft on the bench.

This one stung, especially since it occurred 24 seconds after Hintz tied the game.
The Oilers had possession in the neutral zone, but Cody Ceci’s pass was knocked down in mid-air by Jamie Benn and then he moved it quickly to Seguin for a two-on-one.
Ideally, Ceci’s pass gets through to Kailer Yamamoto and he would either dump it in or get it to Evander Kane open in the middle of the ice. Benn made a nice play to knock the pass out of mid-air. It wasn’t like Ceci threw a pizza up the middle. But Ceci would want that pass getting to Yamamoto. Benn then shields Yamamoto and slides it up to Seguin. When you watch the video you see Kane gliding, anticipating the pass to make it to Yamamoto. Could Kane have stopped? Possibly, but I don’t think he made an awful or egregious decision. He could have been more cautious to ensure the puck made it to Yamamoto, but again in a split second moment I don’t see it as awful.
Again, many questioned Nurse’s decision to go down. I asked Strudwick his thoughts.
“Personally I don’t like it, but I wonder if he is coached to do that. When my cousin (Scott Niedermayer) played in New Jersey they were coached to lie down. It forces the forward to make a good play and Seguin did. Nurse could have stayed on his feet and the Stars still could have scored. I wouldn’t blame Nurse for this goal. It was a combination of many small errors. Started with Ceci’s pass not getting through, then Kane maybe stopping and even McDavid taking an extra stride on the back check. There wasn’t one major culprit,” said Strudwick.
Woodcroft was asked about the two goals.
“There’s some individual errors that lead to those goals, and then there’s some teams things structure-wise we got away from. I think if you look at some of them, I would say some of them came from fatigue error. That’s no excuse. We can be better. Part of the reason you have a structure in place is to protect you in times like that. Like I said, we’re going to learn from that experience and move on.” 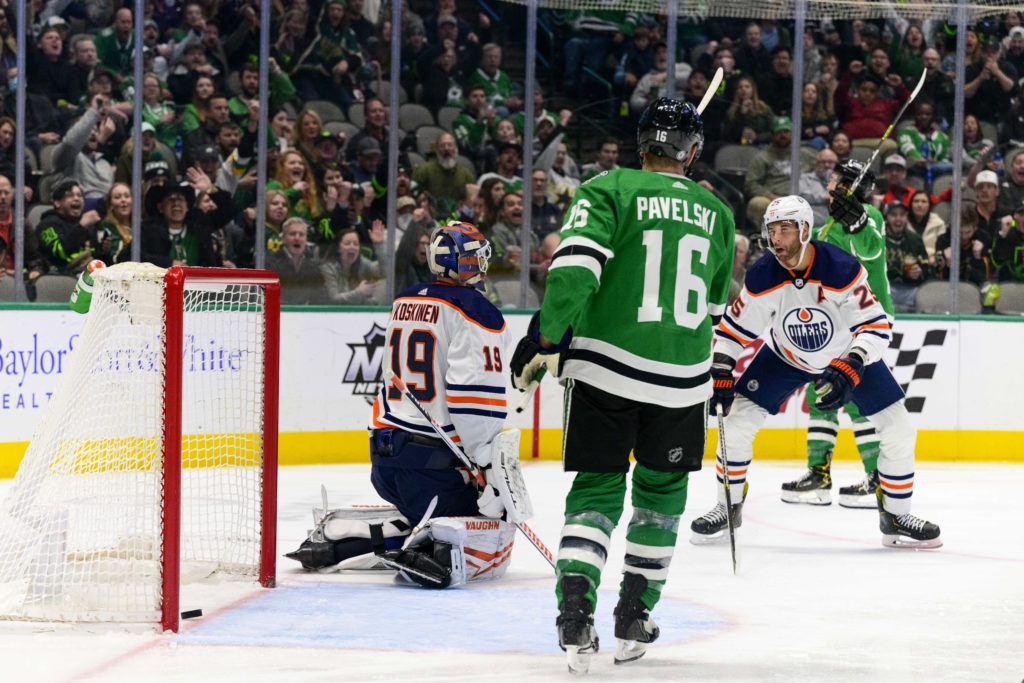 Mar 22, 2022; Dallas, Texas, USA; Edmonton Oilers goaltender Mikko Koskinen (19) gives up a goal to Dallas Stars left wing Jason Robertson (21) during the second period at the American Airlines Center.
The question is: Will they execute and make better decisions next time they are in a close game down the stretch? The Oilers have done a good job holding leads in the third period. But last night’s game reminded me of the 2021 playoff series against the Jets. Some ill-timed giveaways, errant passes or bad decisions cost them goals.
Every team makes mistakes. Without mistakes, we’d barely see any goals in the NHL, but teams who win in the playoffs limit their mistakes at key times in games.
We haven’t seen the Oilers toss a game away like this since Woodcroft took over. He mentioned numerous times how they have to learn from it and move on. He is correct, but the challenge for the coach, and the players, is that they don’t know if they’ve learned the lessons until the next time they are in that position.
There will be close games down the stretch, but will the opponent be as desperate as the Stars? Dallas needed to win last night as they are battling for their playoff lives. Only seven of their remaining games look to have desperate opponents like LA, Dallas, Nashville, Minnesota, Vegas and St. Louis. Maybe the Oilers will have a one-goal lead in the final eight minutes, or maybe they won’t.
We won’t know until the next situation arises, but if the Oilers want to win come playoff time, then they need to remember last night’s loss and do their best to not make the same errors. None were horrendous, but the culmination of many teammates making small errors led to two goals in 24 seconds and a tough loss.