Off The Top Of My Head 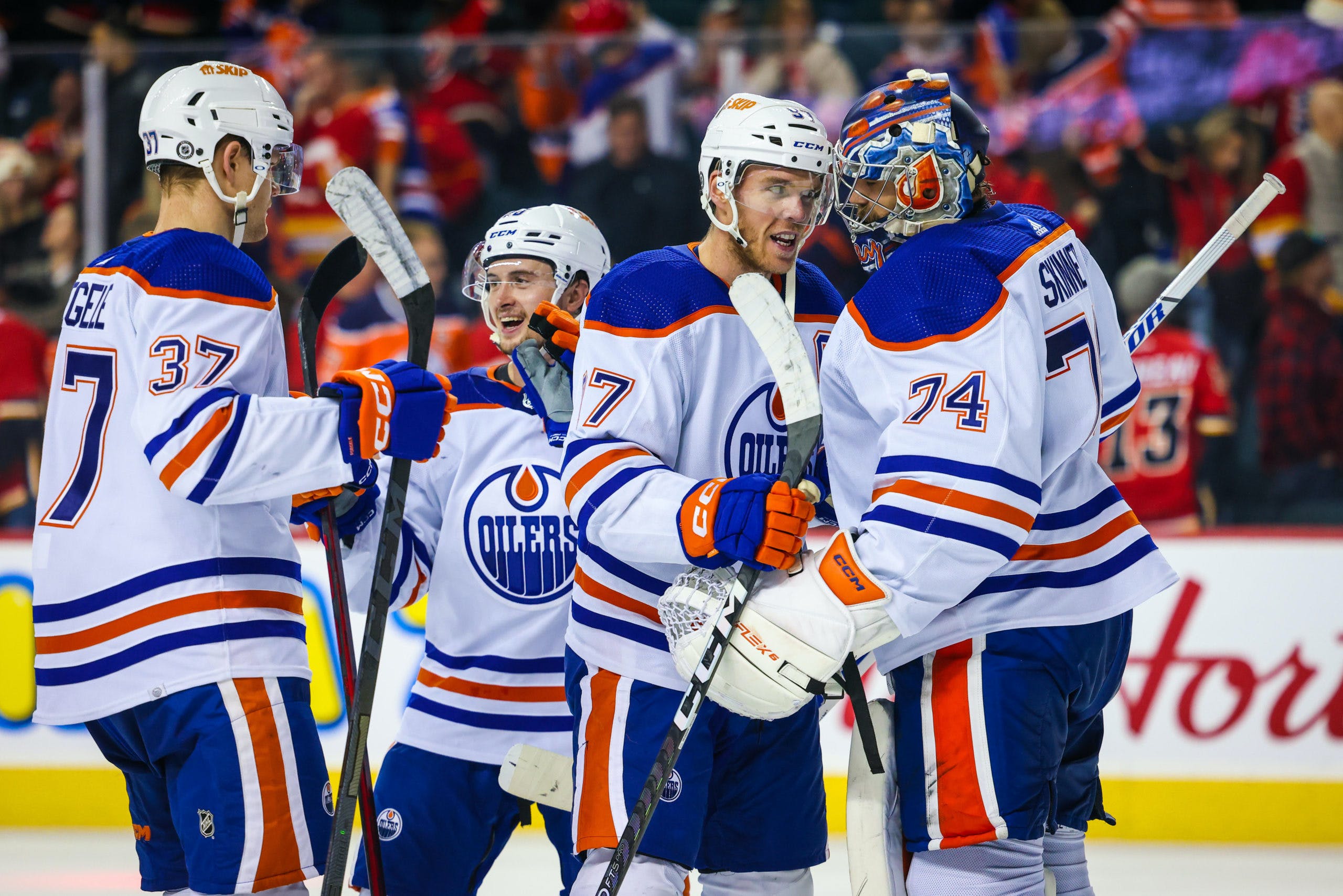 By Robin Brownlee
1 month ago
I wasn’t surprised to see Stuart Skinner back in the blue paint for the Edmonton Oilers against the Calgary Flames last night at the Saddledome considering how well he performed in relief of Jack Campbell in a 4-3 loss to the Flames Oct. 15.
Yes, Campbell is the starter, but after giving up four goals on 11 shots two weeks ago, he got the hook and Skinner stopped all 31 shots he faced. On top of that, Skinner has been better overall this season – he faced the Flames last night at 1-1-0 with a 1.44 GAA and .957 save percentage. Campbell, meanwhile, is 4-2-0 with a 3.89 GAA and .888.
Due in large part to that bad start against the Flames, Campbell’s numbers through six appearances aren’t very flattering, but he’ll get better and so will they. Coach Jay Woodcroft knows that, but Skinner got the net last night and he responded with 40 saves in a 3-2 win for the Oilers. Good call, coach.
“Jack has a clear understanding of our belief in both of our goaltenders,” Woodcroft said. “We just want to make sure that we’re keeping both up and running here and playing enough games. We don’t want to overuse anybody.
“We just want to make sure that people are up and running. I think we have two quality goaltenders. I think we’re finding different ways to win with both, and I feel good about both of them.”
THOSE ZEBRAS
I was reluctant to criticize officials after a loss during the years I worked the Oilers beat because it sounds like a loser’s lament and people are quick to tag you as a homer. I have no problem doing it after that 6-5 win over the Chicago Blackhawks Thursday. The Oilers weren’t nearly as disciplined as they needed to be, but the zebras made it worse by being awful.
It’s almost as if referees Chris Rooney and Jon McIsaac, who called 14 minor penalties in the second period alone, thought fans bought tickets to watch them officiate because they did everything possible to grab the spotlight on a night when the Oilers had seven power plays and the Blackhawks had 10. Yes, 10.
Rooney and McIsaac also got lit up, rightfully so, for the goal by Evander Kane they called off after signaling a good goal, which generated countless memes. It seemed to me Rooney and McIsaac were fixated on Kane – aside from the no-goal call, he drew two minors for crosschecking Connor Murphy and an unsportsmanlike conduct minor for mouthing off from the bench.
Through all of that in a tire fire of second period, Kane was on the ice in the final minute and set up the winner by Leon Draisaitl after Connor McDavid set the stage with his 12th career hat-trick. What sticks with me is what coach Jay Woodcroft had to say about Kane in his post-game availability. While Kane probably should’ve shut his yap on the bench, Woodcroft had his back. We’ve seen that a time or two with other players.
“The big thing I want Evander to realize is that his coaching staff has his back,” Woodcroft said. “His teammates have his back. I didn’t know what happened there on the bench call or why that happened, but I knew that we needed to get him back up and running in the game and that he’s an important piece to our team. I brought our team together, and eventually, he made the play on the winning goal.
“I wanted to show trust in our player. Like I said, I don’t know what happened on that bench call, and for me, I wanted him to feel the belief that the staff has in him, that his teammates have in him, but I also knew that we weren’t going to win the game from the penalty box. So in between the second and third period, the group had a good chat about what it was going to win the game and bank the two points.”
ABOUT JOEY
It’s been two years and two days since former Oiler Sam Gagner first wrote about his relationship with Joey Moss in the Players’ Tribune. The item ran again last week on the second anniversary of Joey’s passing, which was Oct. 26, 2020.
That piece pushed all kinds of buttons for me when I first read it, from the opening sentence, “Joey Moss was the greatest person I have ever met,” through to the end and it still does now two years later. Here’s a snippet of what Sam wrote:
“I will always cherish everything about our relationship. The sleepover nights, the bowling alley, the wrestling matches, the banter back and forth, the way Joey would light up a room with his smile. Most of all, I’ll remember the way Joey made me feel. The way he made everyone feel.
“When I remember Joey, I’ll think about how we believed all along that we were doing all these things to enrich his life . . . but the truth is that he was enriching ours. Joey made everyone who spent time with him a better person. The fact that he had Down syndrome didn’t matter to him — and it didn’t matter to us, either. He was just one of the guys and that is what made him so special.”
It’s worth a read.
ANOTHER OPINION
Unable to find a fit with the Carolina Hurricanes, former Oiler Ethan Bear gets a chance to get his career untracked after being traded to the Vancouver Canucks Friday. I’m not exactly sure why it’s gone sideways for Bear, but it has. Good luck to him.
FOR BEN
In case you haven’t seen it, the Oilers have stitched a crest in memory of Ben Stelter on to a vest they hand out to their top player after wins this season.
Featured
Nation Takes
Oilers Talk
Recent articles from Robin Brownlee