By Zach Laing
5 months ago
Welcome to the 2021-22 season review and 2022-23 season preview player-by-player! In this, and other articles, I’ll be, well, reviewing the Edmonton Oilers 2021-22 season and previewing the 2022-23 season. You can read about the analytics behind my analysis here.
Folks… It’s Evan Bouchard SZN.
The rookie defenceman played in his first full season in the NHL last year appearing in 81 of 82 games for the Oilers. With a knack for the net, Bouchard scored 12 goals and another 43 points while playing 19:48 per night in a second pairing role. Of all those points he put up, just seven of them came on the man advantage.
Among all defenceman who played as many minutes as Bouchard last year, he ranked seventh in terms of his 5×5 points per hour production. His 1.42 ranked behind the likes of Morgan Rielly, Victor Hedman, Justin Faulk, Brady Skjei, Cale Makar, and Roman Josi. Bouchard is good. Among the same parameters, Bouchard ranked fifth in 5×5 goals per hour behind Hedman, Shayne Gostisbehere, Makar, and Faulk.
While he had his rookie woes and moments where he looked panicked, that was to be expected, and to be honest, at 22 years old, I expect more of it, too. We know it takes defencemen longer in their developmental path than forwards, so patience will be key when it comes to Bouchard.
What we can’t deny, however, is the offensive upside he has in his game right now. Elite offensive producers at 5×5 are hard to come by, just look at the list above.
The Oilers have something special brewing in their defensive corps. 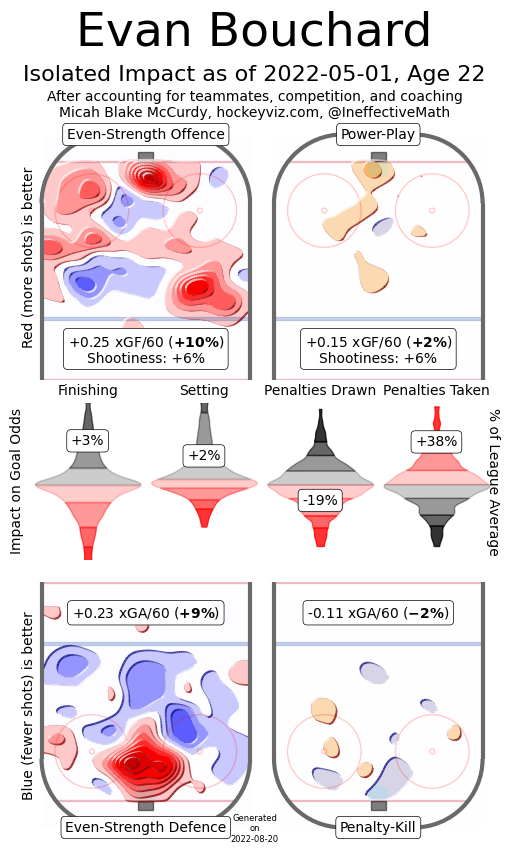 Bouchard’s numbers were strong in his rookie year. Offensively, the Oilers played with great pace with him on the ice posting strong shot attempt and scoring chance rates, as well as positive goal and expected goal rates. He’s truly a driver of play when it comes to his offence, and there’s some value in his defensive play, too.
Offensively, he contributed at a 10 percent rate above league average while defensively, he contributed at a nine percent rate below league average. There’s undoubtedly room to improve in his own zone, and I feel like a potential pairing alongside Brett Kulak could help improve that.

I’m expecting a breakout season from Bouchard this year. He has a tremendous shot and I expect him to use it more, and I also think it’s time for him to take over PP1 duties as the long defenceman out there. He projects to take on that role down the road, and I think he’s ready for it now. It’s realistic to think that Bouchard can be a 60+ point player this season.
Zach Laing is the Nation Network’s news director and senior columnist. He can be followed on Twitter at @zjlaing, or reached by email at zach@oilersnation.com.
Nation Takes
News
Oilers Talk
Recent articles from Zach Laing