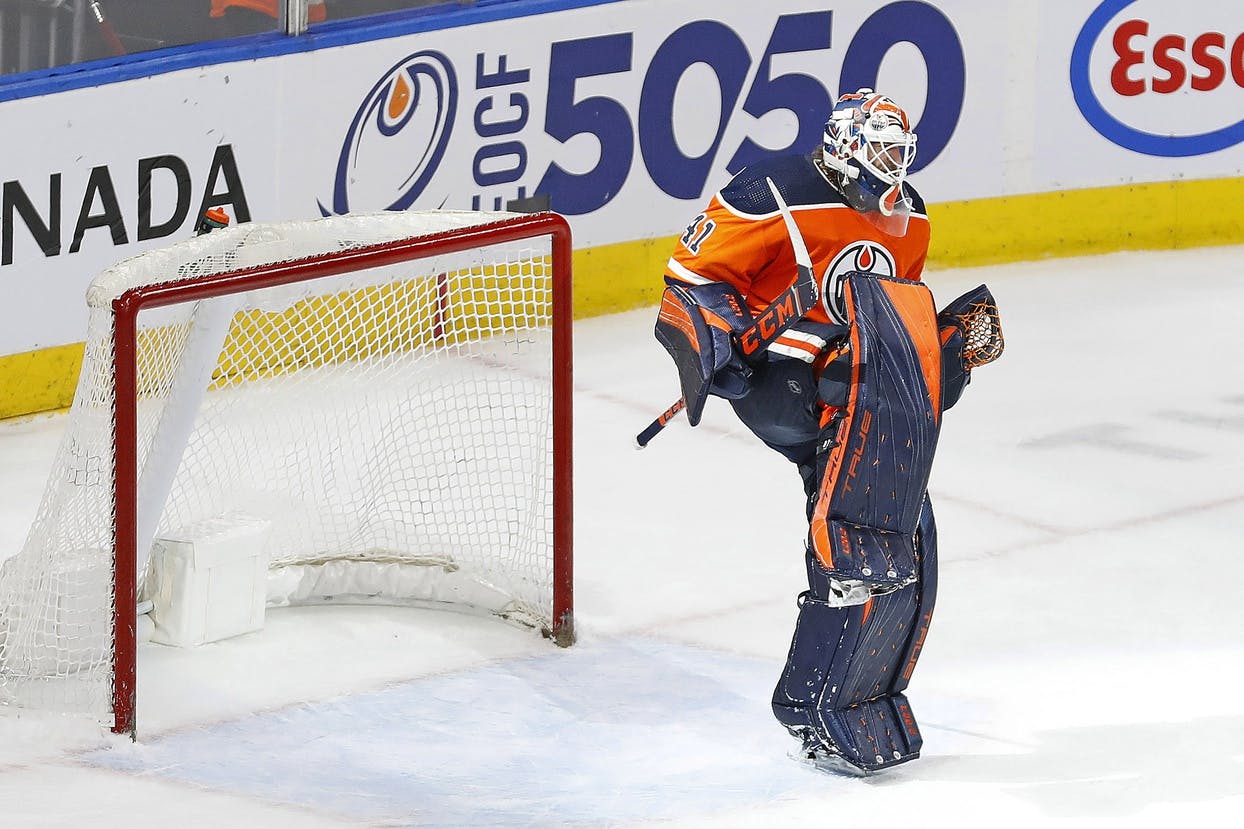 By Zach Laing
3 months ago
Welcome to the 2021-22 season review and 2022-23 season preview player-by-player! In this, and other articles, I’ll be, well, reviewing the Edmonton Oilers 2021-22 season and previewing the 2022-23 season. You can read about the analytics behind my analysis here.
Sail on, Schmiddy.
The Mike Smith era in Edmonton is all but over. All signs are pointing to him spending the final year of his contract on the LTIR, and I’d love to know what he played through last year. As the season wound down and we head from players, coaches and management, word started to slip out that Smith was playing through a lot last season. What is was we likely won’t know.
What we do know, however, is that Smith missed a good chunk of time last year. He suffered a lower-leg injury just three games into the season, and didn’t return to the lineup until New Year’s Eve getting shelled in a 6-5 loss to the New Jersey Devils, but that night he tore a tendon in his thumb covering a puck. A few days later on January 5th, Smith played again against the Toronto Maple Leafs allowing three goals in a loss, and it was back to the injured reserve.
Smith returned in early February and after going 3-6 with a .885 save percentage in his first nine games back. He was… not great. It was clear he was well behind the eight ball in comparison to every other player. But he shook off the rust, and down the stretch was one of the best goalies in the league.
Between March 17th and the end of the season, he appeared in 13 games posting an 11-1-1 record and an astonishing .941 save percentage. Come the playoffs, he continued to play some good hockey. He had his moments, of course, and looked shaky in both openers against the LA Kings and Calgary Flames. But as a whole, Smith posted a .913 save percentage which was virtually average when looking at all other playoff goalies.
In a way, Mike Smith is going to be missed by the Oilers. He was strong at helping his defencemen around him and really was a leader on this team. He had his high moments where he looked unstoppable, but he also had times where he looked as if he were an AHL callup.
That being said, the true knock against Smith during his whole tenure in Edmonton was his inability to stay healthy and consistent in the Oilers crease. Now, with Jack Campbell coming to town, the Oilers will hope to find a level of consistency in crease they hadn’t previously had.
Zach Laing is the Nation Network’s news director and senior columnist. He can be followed on Twitter at @zjlaing, or reached by email at zach@oilersnation.com.
Nation Takes
News
Oilers Talk
Recent articles from Zach Laing