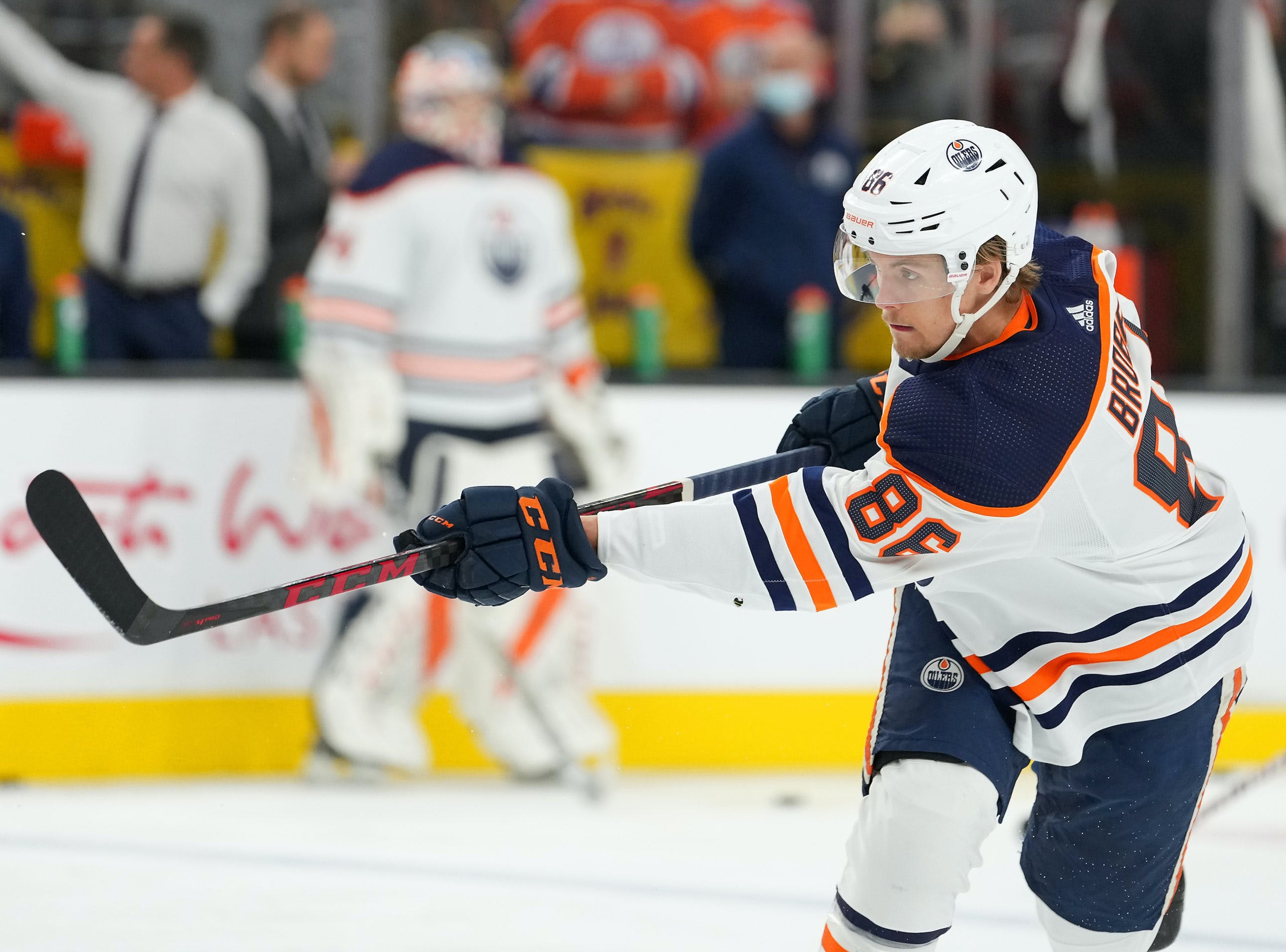 By Zach Laing
3 months ago
Welcome to the 2021-22 season review and 2022-23 season preview player-by-player! In this, and other articles, I’ll be, well, reviewing the Edmonton Oilers 2021-22 season and previewing the 2022-23 season. You can read about the analytics behind my analysis here.
It’s Philip Broberg’s time to take the next step in his career.
He came to North America from Sweden last season and played his first full season on the smaller ice. He started the season in Bakersfield with the Condors where he appeared in 31 games over the course of the year scoring four goals and 23 points, but he also got a good stint in the NHL, too. He played in 23 games scoring a goal and two assists while averaging 13:28 over the course of the year.
Broberg was up in late November getting a nine-game stint where he got his first NHL point, an assist, in his NHL debut. He later was recalled when Jay Woodcroft and Dave Manson were promoted to the NHL.
He stayed with the team for a month appearing in 14 games averaging 12:14 TOI per game. The Oilers’ coaching staff utilized him as the seventh defenceman at a time when the team was dealing with injuries and COVID-19 roster constraints. He later got recalled for a game on April 28th, where he scored his first NHL goal against the San Jose Sharks
All in all, it was a quiet NHL season for him but that’s not a bad thing. The team eased him into games and gave him a chance to succeed — something that will pay dividends for the club down the road.

If there were ever a case for PDO painting a picture of a player, Broberg could be a perfect example. While he posted a strong shot attempt share and a decent scoring chance share, he got pummelled in the goals category. A 94.3 PDO is to blame.
On the ice, Broberg and the Oilers only scored on 7.19 percent of their shots, and the goaltenders had an on-ice save percentage of .8712 — both numbers well below the league average.
What we can discern from his numbers are two important things: when Broberg was on the ice, the Oilers allowed significantly fewer shot attempts against and fewer scoring chances against than his teammates. This is a great sign.
Isolating Broberg, he contributed offence at a six percent rate below league average and defense at a one percent rate above league average. Once again, a really good sign.

I’m excited to see what Broberg can do in his NHL career. From what we’ve seen, his ceiling is a legitimate top-four defenceman, but that could improve too.
As I wrote about this past week, Broberg has a spot on this roster that’s essentially his to lose. He’ll likely draw in on the Oilers’ third pairing on the left-side and he’s already shown an ability to play the game well under Woodcroft and Tippett.
Zach Laing is the Nation Network’s news director and senior columnist. He can be followed on Twitter at @zjlaing, or reached by email at zach@oilersnation.com.
Nation Takes
News
Oilers Talk
Recent articles from Zach Laing