By Zach Laing
4 months ago
Welcome to the 2021-22 season review and 2022-23 season preview player-by-player! In this, and other articles, I’ll be, well, reviewing the Edmonton Oilers 2021-22 season and previewing the 2022-23 season. You can read about the analytics behind my analysis here.
The curious case of Tyler Benson.
Drafted by the Oilers in the 2nd round of the 2016 draft, it’s do-or-die time for the 24-year-old. This past season he stuck with the big club out of training camp, but managed to get in for 29 games this season scoring one goal and two points while playing 8:33 per game.
He didn’t get the best opportunity to show what he could do, but he also never seized the moment like so many in Edmonton have been waiting for him to do.
It’s not to say he isn’t a gifted offensive player, but he hasn’t been able to translate it from the AHL game to the bigs. Some of this has to do with his linemates, where he gets absolutely zero run support, and as mentioned before, some of it’s on him.
Footspeed continues to be an issue for Benson, and it’s hard to imagine at this point in his career we see him make strides in that category.
Truth be told, however, is Benson could be a valuable organization depth piece in the American Hockey League. Over five years there, he’s scored 38 goals and 153 points in 174 games including four goals and 12 points in 18 games this season. 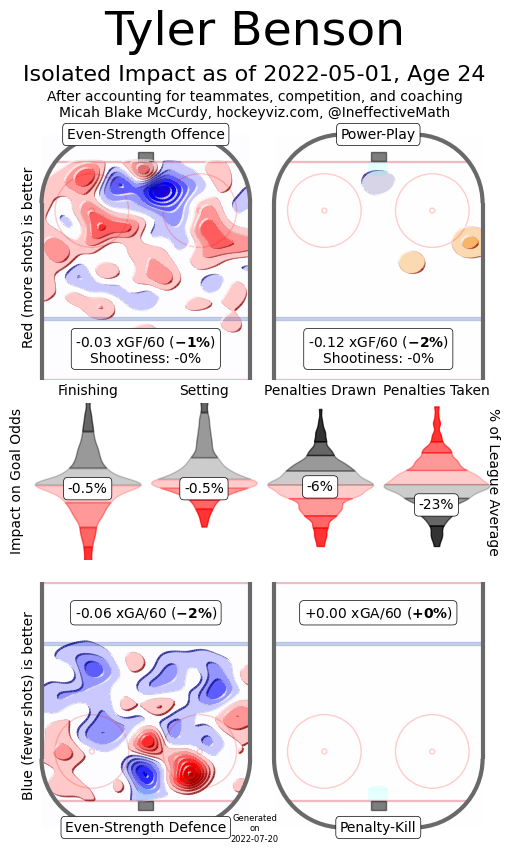 There’s not much to glean from Benson’s underlying numbers. His strength lies in an ability to limit opposing shot attempts and scoring chances, both at better rates than team average, but he got absolutely crushed in terms of his goal share.
This points back to a 4.58 on-ice shooting percentage which has driven his PDO down to 95.8 — over four points below average. When your most common linemates are Colton Sceviour, an early season rookie in Ryan McLeod, and Kyle Turris, there’s not much you can do in the way of generating offence.
His isolated impact charts show him providing offence at a one percent rate below league average, and defence at a two percent rate above league average. That coincides with his other underlying metrics.

The future is murky for Benson with the Oilers. He’ll be given a chance to make the big club under a familiar face in Jay Woodcroft, and it’s entirely possible it happens.
It was interesting that Benson had been re-assigned to the AHL after Woodcroft came to town, but thinking back on it, it made sense. Benson’s still technically a rookie in the NHL, and Woodcroft had very, very little practice time with the Oilers at any point.
The Oilers issued Benson a qualifying offer this offseason signaling a desire to retain him in the organization in some role.
Now, it’s up to him to carve out a role in the NHL.
Zach Laing is the Nation Network’s news director and senior columnist. He can be followed on Twitter at @zjlaing, or reached by email at zach@oilersnation.com.