By Zach Laing
4 months ago
Welcome to the 2021-22 season review and 2022-23 season preview player-by-player! In this, and other articles, I’ll be, well, reviewing the Edmonton Oilers 2021-22 season and previewing the 2022-23 season. You can read about the analytics behind my analysis here.
Zack Kassian’s time in Edmonton could very well be up.
With two years left on a deal paying him $3.2-million per year, it’s hard to justify keeping Kassian around as a fourth-line player. Couple that with a tough 2021-22 season filled with injuries and it makes keeping moving him out make even more sense.
Kassian appeared in 58 games this year scoring six goals and 19 points playing just 11:47 per night. While remaining a physical presence laying 14.07 hits per 60 minutes at 5×5, it’s hard to keep a player with his cap hit around to play fourth-line minutes, when he could be easily replaced by a player with a third of his salary.
All in all, Kassian hasn’t been able to deliver on his deal, something few expected. After all, his contract was signed following an offensive heater while playing alongside Connor McDavid. 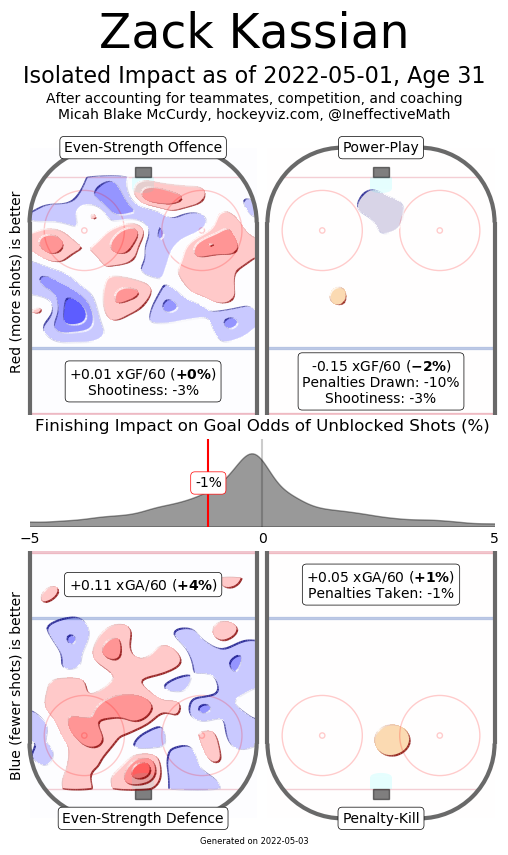 Kassian’s underlying numbers this year were among the best of his tenure with the Oilers. He drove play at a decent pace controlling the shot attempt share, while his goals for per hour rate was the second-best of his tenure. He narrowly broke even in goals, but fell short in the scoring chances share and expected goal share.
His splits between his goal-scoring rate and expected goal rate suggest the Oilers overachieved ever-so-slightly with him on the ice.
His isolated impact charts show some of his flaws, too. He contributed league-average offence while his defensive play was five percent below league average.

Once again, the biggest knock here is Kassian’s contract. Even if some of his underlying numbers were “okay,” that’s a lot of money for a player that far down your lineup. With his isolated impacts show average offence and below average defence, the Oilers will still be best moving on from him this offseason.
The Oilers have two routes they could go: first would be a buyout, while the other is a trade. A buyout would provide the Oilers with cap savings of $2.53-million this year and $1.33-million in 2023-24, with penalties of $966k the following two years.
A trade will likely mean the Oilers would have to add sweetener to make it happen, and I wonder if a team would consider one of the AHL prospects the Oilers have on the backend.
Zach Laing is the Nation Network’s news director and senior columnist. He can be followed on Twitter at @zjlaing, or reached by email at zach@oilersnation.com.