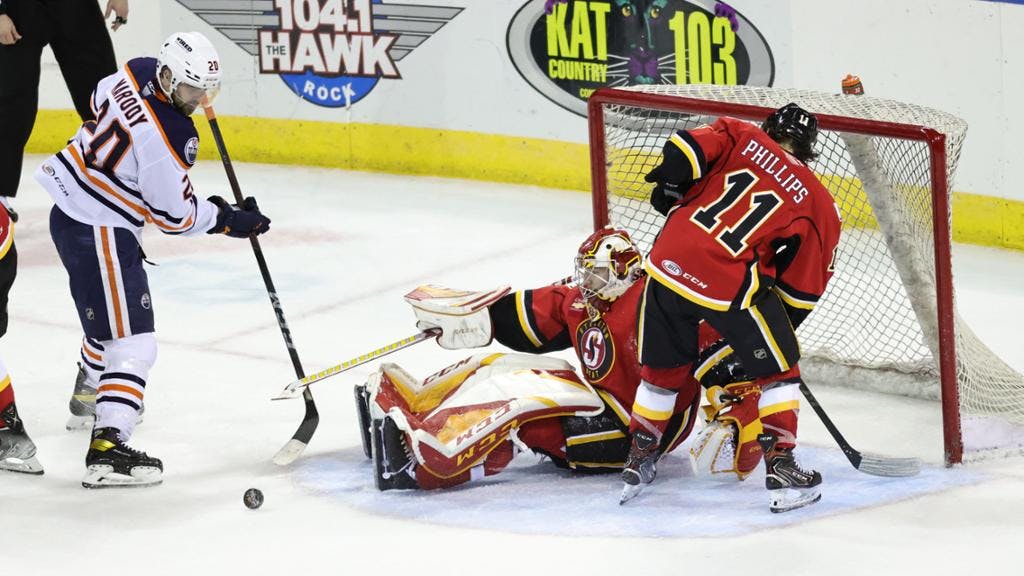 By Liam Horrobin
8 months ago
The playoffs are in full swing now in junior hockey across North America.
A few Oilers prospects teams have already been eliminated with Tyler Tullio and the Oshawa Generals out, and Jake Chiasson and the Brandon Wheat Kings done in the first round. After falling in the playoffs, Tullio and Chiasson signed amateur tryout deals with the Bakersfield Condors. Carter Savoie also signed an entry-level contract this past week with the Edmonton Oilers.
After winning an NCAA National Championship with the University of Denver, Savoie signed his ATO with Bakersfield but with no entry-level contract. However, now after a couple of weeks, Savoie is locked in with the Edmonton Oilers.
Not much else to report off the ice in the prospect world, now without further ado, let’s talk about what’s happening on the ice.

The Bakersfield Condors have had a difficult time against the Stockton Heat in the AHL playoffs. After two games, the Condors are down 2-0 in the series and on the brink of elimination.
In game one, Bakersfield found themselves down 2-0 after the first period, and couldn’t dig their way out of it. Dino Kambeitz grabbed the only goal for the Condors with the final score going in favour of Stockton, 3-1.
The Condors were much better in game two and were tied 2-2 early in the third period. However, Emilio Pettersen scored midway through the third period to give the Heat a 3-2 win and a 2-0 series lead.
They’re back in action tonight in Bakersfield as they look to stay alive.

Max Wanner and the Moose Jaw Warriors have found themselves down in a series too. They’re down 3-1 to the Winnipeg Ice in the WHL playoffs in the second round. Wanner has one point in the series which game in the Warriors only win. He assist on Carter Anderson’s shorthanded goal in game three which resulted in the game winner.

With Tyler Tullio now in Bakersfield, Matvey Petrov is the only Oilers prospect left in the postseason in the OHL.
Petrov and the Battalion are up 3-1 over Shane Wright and the Kingston Frontenacs. Petrov grabbed a pair of assists this games three and four to take his postseason total to six points. He now has a point in his last five playoff games.

Xavier Bourgault put on a clinic in Shawinigan’s first-round matchup. In three games, the Oilers had seven points to help send the Cataractes to the second round. In game one, he made his presence known scoring a hat trick.
Nation Takes
Oilers Talk
Recent articles from Liam Horrobin