Edmonton Oilers Retrospective: Shocking the Dallas Stars in the first round of the 1997 playoffs 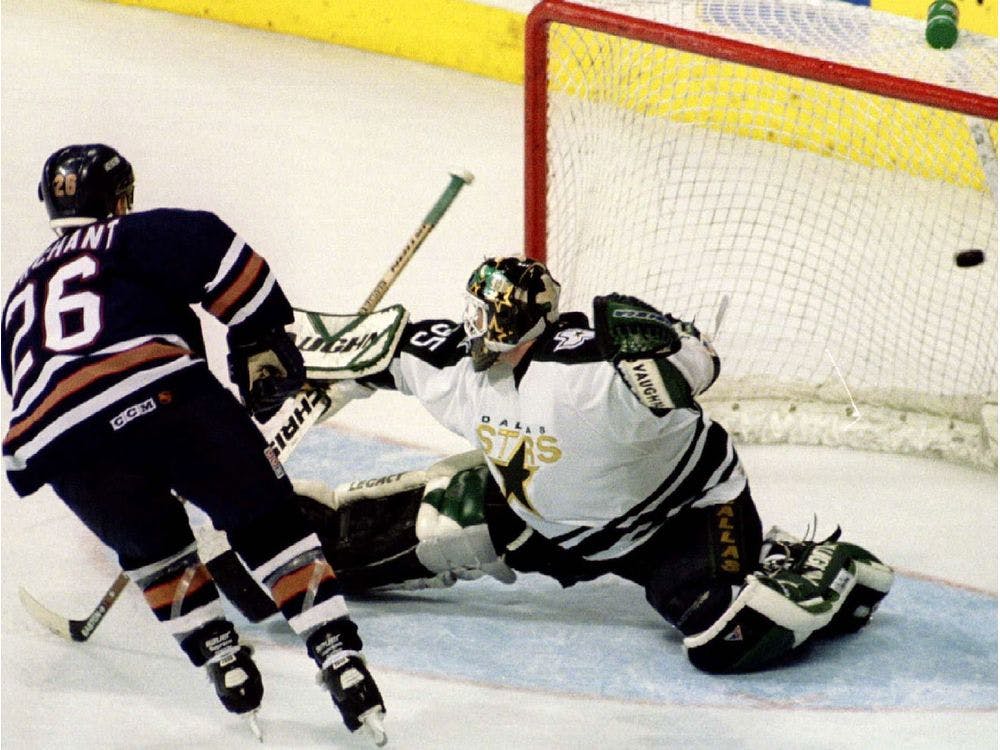 By Cam Lewis
1 month ago
The 1990s were a difficult time for the Edmonton Oilers.
The beginning of the decade saw the unravelling of the 1980s dynasty team as the small-market, low-budget Oilers couldn’t afford to keep their stars in town. Jari Kurri left to play in Europe, Mark Messier demanded a trade, Glenn Anderson and Grant Fuhr were dealt to Toronto, and even head coach John Muckler moved on to become the coach and general manager in Buffalo.
Frustration from the fans that was sparked by the trade of Wayne Gretzky a few years earlier was compounded by the exodus of the rest of the group, resulting in a steep decline in attendance.
In 1992-93, the Oilers would miss the playoffs for the first time in franchise history. By then, they were a skeleton of their former selves, featuring only a handful of players, Esa Tikkanen, Craig MacTavish, and Bill Ranford, from their glory days. That team would go on to miss the playoffs for the next three years in a row after that, too.
But as the team struggled on the ice, they were able to re-stock their cupboards with talent through the draft and through trades. The Oilers acquired Doug Weight and Todd Marchant in separate trades from the Rangers in exchange for Tikkanen in 1993 and MacTavish in 1994, they drafted Ryan Smyth and Jason Arnott with top picks in 1993 and 1994, and they moved two first-round picks to the Blues to get Curtis Joseph and Mike Grier in 1995.
This fast-skating, gritty Oilers team, backstopped by excellent goaltending by Joseph between the pipes, would make a return to the playoffs in 1997 after a four-year hiatus. They put together a 36-37-9 record, good for seventh in the Western Conference, meaning they would match up with a dominant Dallas Stars team in the first round. 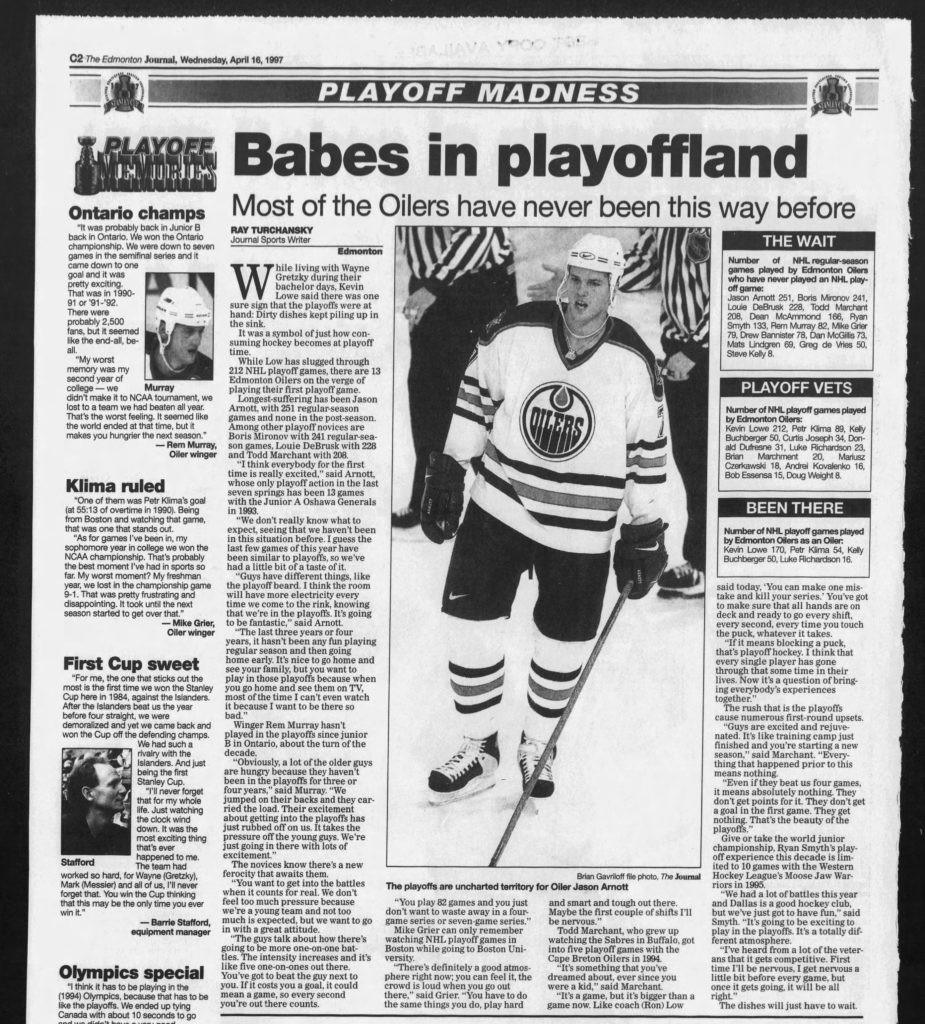 This truly was a David vs Goliath situation. The Stars had finished the season with a 48-26-8 record, tied for second-most points in the league with the New Jersey Devils and just three points back of the Presidents’ Trophy winners and defending Stanley Cup Champions, the Colorado Avalanche. They had also dominated the Oilers in the season series, winning all four games and outscoring Edmonton by a score of 18-6.
With Ken Hitchcock behind the bench for his first full season, the Stars looked like a serious Stanley Cup contender. They had acquired Joe Nieuwendyk the previous year for top prospect Jarome Iginla, giving captain Mike Modano another star to play on his wing. Dallas also signed veteran Pat Verbeek in free agency and acquired stud defenceman Sergei Zubov in an off-season trade. Thanks to the rock-solid team defence managed by Hitchcock, former Oiler Andy Moog had the best season of his career in net for the Stars.
But the Oilers weren’t going to roll over easily. For many of Edmonton’s young players like Jason Arnott and Ryan Smyth, this was their first kick at the big stage in the playoffs. The Stars won Game 1 at home by a score of 5-3 and then the Oilers battled back with an impressive 4-0 win in Game 2 to knot the series at 1-1.
In Game 3 back in Edmonton, the Stars carried a commanding 3-0 lead late in the third period, but the Oilers stormed back with three goals in just under two minutes from Doug Weight, Andrei Kovalenko, and Mike Grier to tie things up before veteran Kelly Buchberger won the game in overtime. This would become a theme for the rest of the series.
After a 4-3 win by the Stars in Game 4 tied the series at 2-2, things shifted back to Dallas for a pivotal Game 5. The Oilers would edge out a 1-0 victory thanks to a clutch Ryan Smyth goal in double overtime and an incredible 43-save shutout performance from Joseph in net. With a chance to clinch the upset on home ice, the Oilers ended up losing the sixth game by a score of 3-2, sending the series back to Dallas for a winner-take-all seventh game.
This had already been an incredible series, filled with tight, back-and-forth play, overtime heroics, and amazing goaltending, so it was fitting that there would be a Game 7.
The deciding game certainly didn’t disappoint. The Stars opened the scoring a couple of minutes into the game but the Oilers tied it seven seconds later. Edmonton pulled ahead early in the second period but Dallas scored a pair of their own to regain the lead. With 20 seconds left in the second, the Oilers again tied things up. Nobody was able to score in the third period so Game 7 went to sudden death overtime.
The Stars had an incredible opportunity to win the game and the series in the middle of the first overtime frame. Dallas defender Darryl Sydor carried the puck behind the net and shoved a wrap-around shot into Joseph. The rebound came out front and Joe Nieuwendyk fired the puck toward the wide-open net but Joseph somehow managed to dive across the crease and get his stick down in time to make the save. 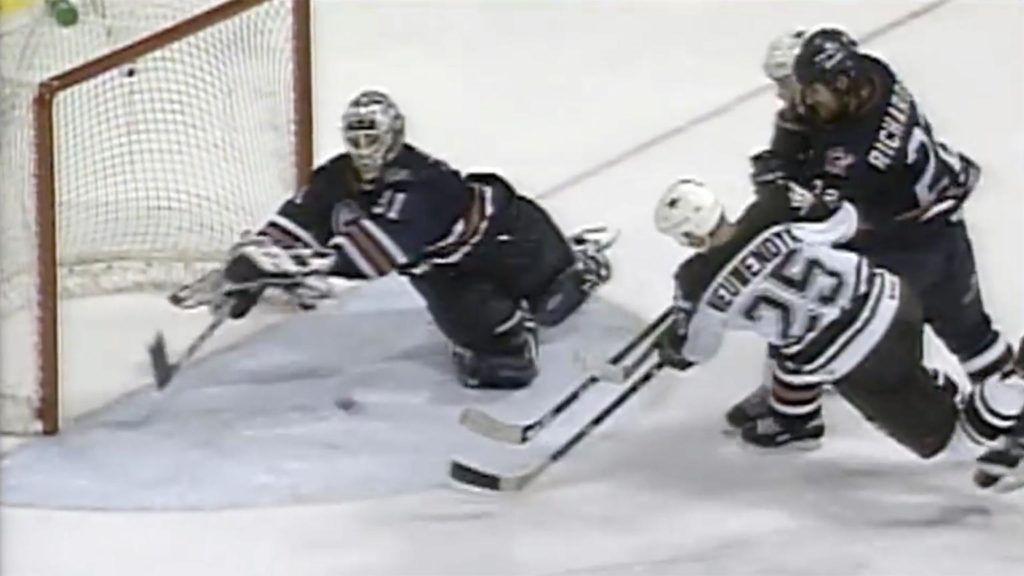 Everybody was shocked by the save. Joseph stood in the net and you could see this intense, completely unphased look on his face through his mask. The Oilers on the ice looked shocked that they were still alive and the Stars on the bench looked dumbfounded that they hadn’t won. Hitchcock could only shake his head and chuckle under his breath.
As the highlight was rolling, the colour commentator said… “right now, how could you even imagine that Dallas could win this game?” He was right.
After the next face-off, the Stars looked completely out of it. Mike Modano won the draw and Sydor fired a slap-shot on the net that Joseph would direct into the corner. The Oilers broke the puck out, but the Stars would collect it again in the neutral zone and tried to gain the zone again. Modano got worked off the puck by Oilers defender Greg De Vries and Doug Weight picked up the puck to head up ice.
Weight hit Edmonton’s blueline and fired a pass to Todd Marchant, who was streaking up the wing with speed. Marchant collected the puck and ripped by Stars’ defender Grand Ledyard with such speed that he tripped over his own feet while trying to pivot. On a partial break, Marchant cut to the centre of the ice and snapped a shot over Moog’s blocker side.
Game over. Goliath, meet David.
The Oilers would go on to get bounced by the Avalanche in the second round of the playoffs, but this was a much-needed series win for a team and a fanbase that had struggled through a difficult three years. After four seasons on the outside looking in, this gutsy 1997 squad gave Edmonton a reason to get excited again.
Featured
Oilers Talk
Recent articles from Cam Lewis