By Cam Lewis
1 month ago
About a decade and a half ago, the Oilers made a pair of franchise-altering trades over the span of eleven months. The first one nearly netted Edmonton their sixth Stanley Cup and the second one left shockwaves that the Oilers felt for years after the fact.
The entire 2004-05 NHL season was lost because of a gruelling labour negotiation and the new Collective Bargaining Agreement that was finally reached by the owners and the Players’ Association completely altered the landscape of the league. The post-lockout NHL saw ties removed in favour of shootouts, a crackdown on clutching and grabbing to increase offence, and, most importantly, the implementation of a salary cap.
From the perspective of a small-market team like Edmonton that frequently couldn’t afford to keep star players around, a salary cap would be a game-changer. Meanwhile, many big-market clubs had to deal with tearing apart their rosters in order to get their payroll under the $39 million cap ceiling.
Among those teams that needed to shed contracts was the St. Louis Blues. Beyond having a handful of veterans signed to pricey contracts, the team’s owners were actively trying to sell the Blues, so they adopted a no long-term contracts policy. As a result, keeping around star defenceman Chris Pronger, who was a restricted free agent, wasn’t going to work.
Oilers general manager Kevin Lowe jumped at the opportunity to add the former Norris and Hart Trophy winner. Edmonton sent Eric Brewer and prospects Jeff Woywitka and Doug Lynch to St. Louis in exchange for Pronger, and, soon after, the Oilers inked Pronger to a five-year contract worth $6.25 million. 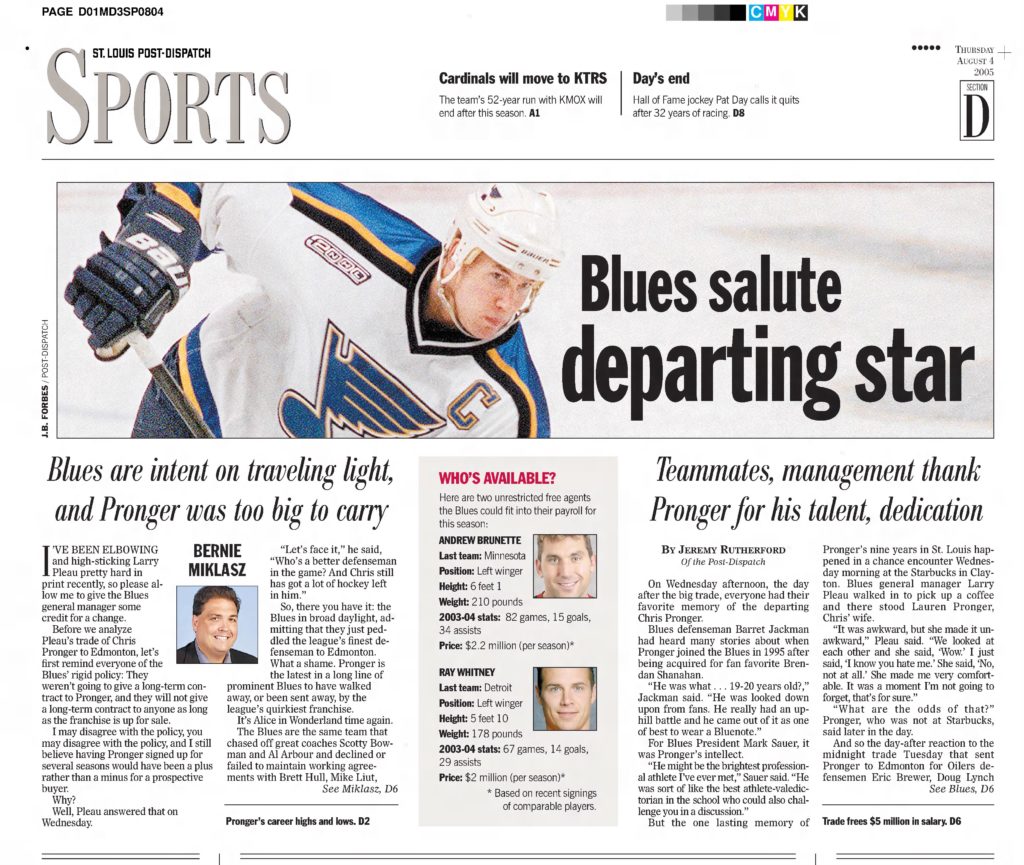 This deal was a perfect example of the new salary cap doing its thing. Five years earlier, the Blues were the high-spending team that benefited from the low-budget Oilers being unable to pay Doug Weight. Now the Oilers were the ones who were able to add an elite talent in the prime of his career.
Pronger himself even noted that his trade to Edmonton represented a shifting of the tides in the NHL…

“I’m not going to lie, I was a little surprised when my agent, Pat Morris, called,” Pronger said one day after the trade was made. “It seems like the Oilers have always been the team trading guys away. But with this new landscape, things are changing.
Give the Oilers credit, they jumped on this fast and hard, just like the way they play the game.”

The loss of Pronger was devastating for the Blues. They went 21-46-15 on the season and missed the playoffs for the first time since 1978-79, ending a streak that had spanned 25 years.
The trade didn’t look any better for St. Louis as time went along. Brewer was a fine defensive defenceman for the Blues but was nowhere near as good as Pronger. The prospects in the deal also didn’t amount to much. Woywitka played 278 games in the league as a depth defender and Lynch only played two NHL games as his career was derailed because of injury.
For the Oilers, Pronger came exactly as advertised. He was a rock in the defensive zone, moved the puck up the ice incredibly well, and he gave the power play a significant boost with his big shot from the point. Pronger logged 27:59 per game for the Oilers during the regular season and scored 12 goals and 56 points.
During the playoffs, Pronger took his game to another level. He averaged 30:57 per game and led the team with 21 points over 24 games as the eighth-seeded Oilers marched through the Presidents’ Trophy-winning Detroit Red Wings and the up-and-coming San Jose Sharks and Anaheim Ducks before ultimately bowing out to the Carolina Hurricanes in Game 7 of the Stanley Cup Final.
Cam Ward was named the Conn Smythe Trophy winner for his excellent play in net for Carolina, but there was certainly an argument to be made that Pronger was the most valuable player in the playoffs that year.
Days after Game 7, rumours started to leak that Pronger had requested a trade out of Edmonton. General manager Kevin Lowe had a difficult situation in front of him, as the return coming back in a Pronger trade had to help keep the Oilers competitive but the team also couldn’t take on too much salary in return because multiple key contributors from their playoff run were up for new contracts.
Lowe worked out a deal with Brian Burke, who drafted Pronger No. 2 overall at the 1993 NHL Draft while he was the general manager of the Hartford Whalers, to send the star defender to Anaheim. Coming back to Edmonton was Joffery Lupul, prospect Ladislav Smid, a first-round pick in 2007, a second-round pick in 2008, and a first-round pick in 2008 if the Ducks went on to win the Stanley Cup. 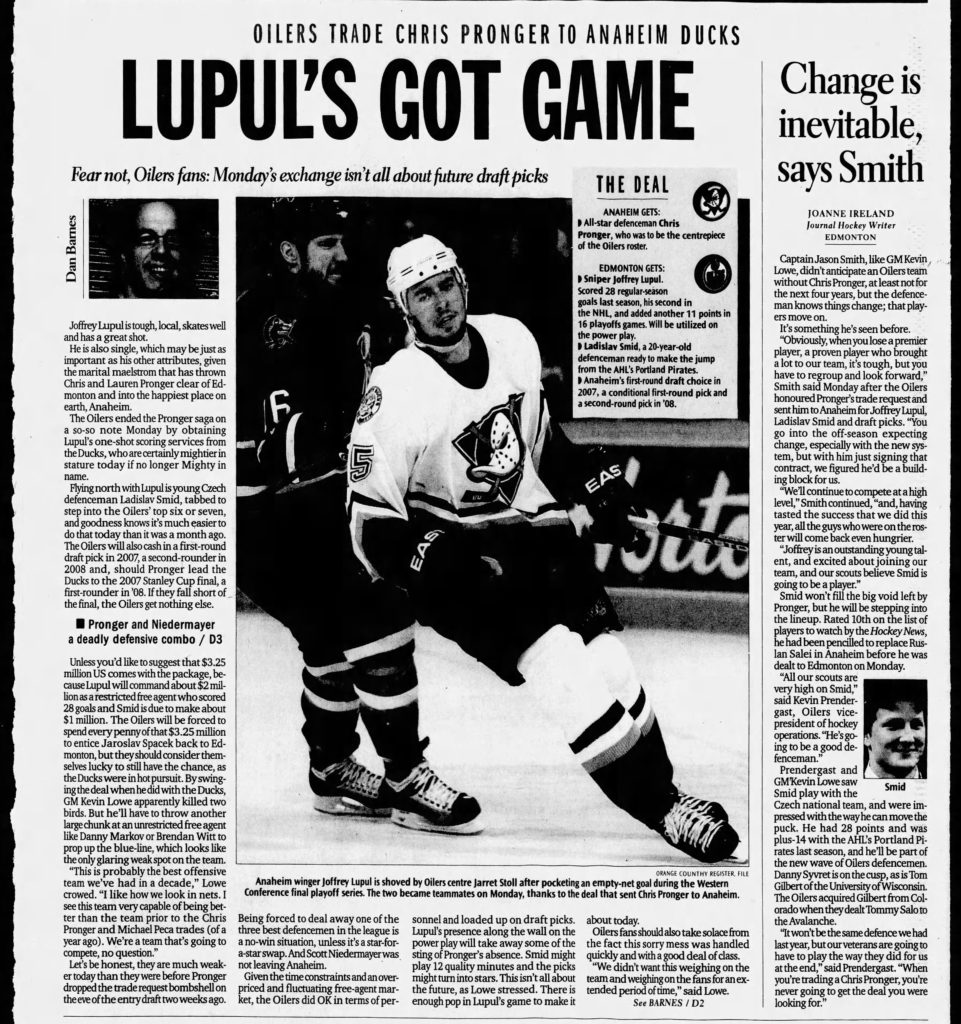 Years later, Burke looked back on the trade and explained that the Oilers went around at the 2006 NHL draft with offers to multiple teams for Pronger…

“At the 2006 draft (then assistant GM) Scott Howson handed slips of paper to four teams with what Edmonton wanted. “It took us less than 45 seconds to say, ‘Yeah, let’s do this,’” Burke said.
We weren’t giving up (Ryan) Getzlaf or (Corey) Perry, but we hated trading Lupul. He was our best forward in the playoffs that year and I thought we were sending an Edmonton boy back there and he would tear it up.”

On the flip side, Lowe noted that the Oilers were aware in the middle of the season that a Pronger trade in the off-season would likely be inevitable…

The other three trade suggestions that the Oilers came up with at the draft in 2006 aren’t known for sure, but there are rumours that one of them was based around Jay Bouwmeester of the Florida Panthers and another based around Tomas Kaberle and Alex Steen of the Toronto Maple Leafs.
Just like with the Blues the previous year, the loss of Pronger resulted in a massive decline in the standings for the Oilers. The Oilers had no adequate replacement for Pronger on their top defensive pairing and Lupul didn’t produce as expected. Edmonton’s 195 goals were the fewest in the NHL in 2006-07 and they finished sixth-last in the league with a 32-43-7 record.
The Ducks, meanwhile, went 48-20-14, good for a tie for third place in the league standings, and they took down the Ottawa Senators in five games to win their first Stanley Cup in team history.
The return for Pronger was a mixed bag for the Oilers…
Getting a good return for a player who wants to leave is never an easy thing to do and, to be fair to Lowe, the Oilers did manage to do much better in their Pronger trade than the Blues did the previous summer. The Oilers wound up with some quality players because of the deal but nobody came close to matching the impact that Pronger had on the team.
Lowe desperately tried to fill Pronger’s void on the roster and compensate for the bruise his trade request left on the city’s ego by going searching for the big fish year after year. You can’t blame him for trying to patch together a contender after coming that close in 2006 but it might have been ill-advised to assume the team without Pronger was anywhere close.
Here we are now, a decade and a half later, and the Oilers still haven’t really been able to replace Pronger. Plenty of things have gone well, highlighted by adding Hall of Fame talents in Connor McDavid and Leon Draisaitl at the top of the draft, but the sentence ‘the Oilers are looking for help on their blueline’ has been omnipresent around these parts since Pronger left.
Sheldon Souray had one very good season on Edmonton’s blueline in 2008-09 but the rest of his five-year deal was derailed by injuries. Lubomir Visnovsky was also excellent for about a year but he was moved for Ryan Whitney and his busted ankles. Andrej Sekera was a rock but he was never the same after getting injured in the playoffs in 2017. The team struck gold with Oscar Klefbom but his career ended prematurely because of shoulder issues. The jury is out on Darnell Nurse, who’s being paid to be a No. 1 defender and sometimes looks the part and sometimes doesn’t.
Editorials
Featured
Recent articles from Cam Lewis