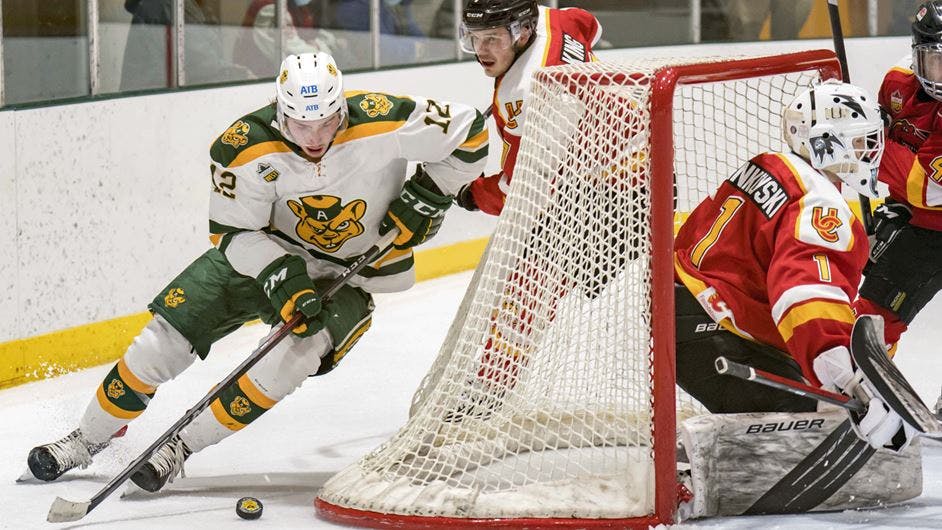 By Zach Laing
7 months ago
The Edmonton Oilers have made a big signing official.
The club announced Tuesday evening they signed forward Noah Philp to a one-year contract for the 2022-23 season. The 23-year-old just wrapped up his season with the University of Alberta Golden Bears and will report to the Bakersfield Condors on an amateur tryout.
The 6’3, 198 lb. forward already plays an NHL-style game with his ability to be strong on the puck in both ends of the ice. Along with a high hockey IQ and penchant for stealing pucks, Philp also has a great release on his shot. He was heavily scouted this year with Edmonton Oilers GM Ken Holland attending multiple games at the Clare Drake Arena.
He played in eight games this season for the University of Alberta Golden Bears scoring eight goals and 11 points. Philp missed the start of the season, but rejoined the club just after Christmas.
In four playoff games this year, he scored three goals and 10 points. Over his full 36 game USports career, Philp scored 20 goals and 38 points.
It’s hard not to like this signing for the Oilers. While some could look and say it’s a “homer choice” to ink a player from the Golden Bears, nobody would be able to have better insight on Philp than the Oilers.
Without putting the cart before the horse too much, the one-year contract suggests to me the Oilers will give him a long look in training camp next year ahead of the NHL season. We could see him competing for minutes when it’s all said and done.
Beyond that, the native of Canmore, Alta. spent four years in the WHL splitting time between the Kootenay Ice and Seattle Thunderbirds. Over his 259 game Major Junior career, Philp scored 54 goals and 166 points.
Zach Laing is the Nation Network’s news director and senior columnist. He can be followed on Twitter at @zjlaing, or reached by email at zach@oilersnation.com.
Nation Takes
News
Oilers Talk
Recent articles from Zach Laing