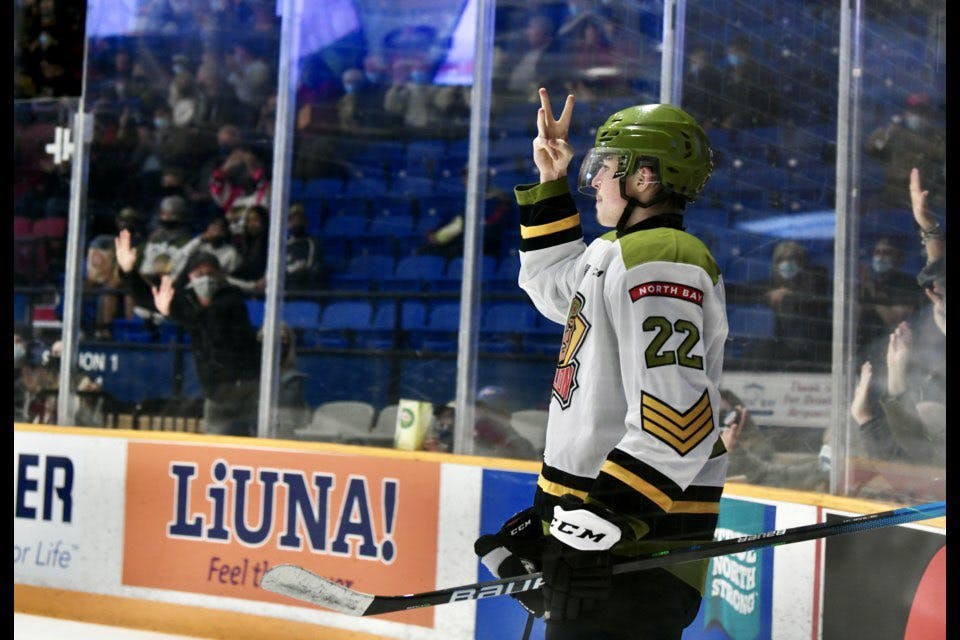 By Zach Laing
1 year ago
The Edmonton Oilers have signed 2021 6th round pick Matvey Petrov to a three-year entry-level contract.
The deal was announced by his agent Dan Millstein.
Petrov, 18, was drafted 180th overall out of the MHL where he scored 22 goals and 42 points for MHK Krylia Sovetov Moskva. Petrov was taken 1st overall in the 2020 CHL import draft by the North Bay Battalion, where he currently plays.
This year, however, he came to North America and has blown the doors off the Ontario Hockey League. In 14 games, Petrov has scored 10 goals and 18 points. Among all OHL players, he is currently tied for third in goals and tied for fifth in points.
In his first OHL game, Petrov scored a hat trick, added an assist and fired eight shots on net.
A relatively unknown prospect heading into the draft, Petrov was still ranked as high as high as 57th overall by FC Hockey, and 92nd by TSN’s Bob McKenzie. The Athletic’s consensus board had him 91st overall.
Here were some scouting reports ahead of the draft:

He has the mechanics of a wrist shot down: distance between feet, downward pressure with forward force through the shot, top hand out, and keeping his chest up. Petrov can move the puck under stick, saucer it above stick, and deceive with lookoffs. – EliteProspects
A strong-skating forward who isn’t shy to throw his body around. He loves being a thorn in the side of his opponents. – FC Hockey
Matvei Petrov is a very promising player who has evident gaps in his game but he has also a lethal weapon like his shot and ability to score goals. Because he’s playing only in the MHL, he seems to be a long-term project who is a few years away from NHL. It’s tough to project his career at this stage, but he has all the tools to make it into the NHL one day. – Recruit Scouting