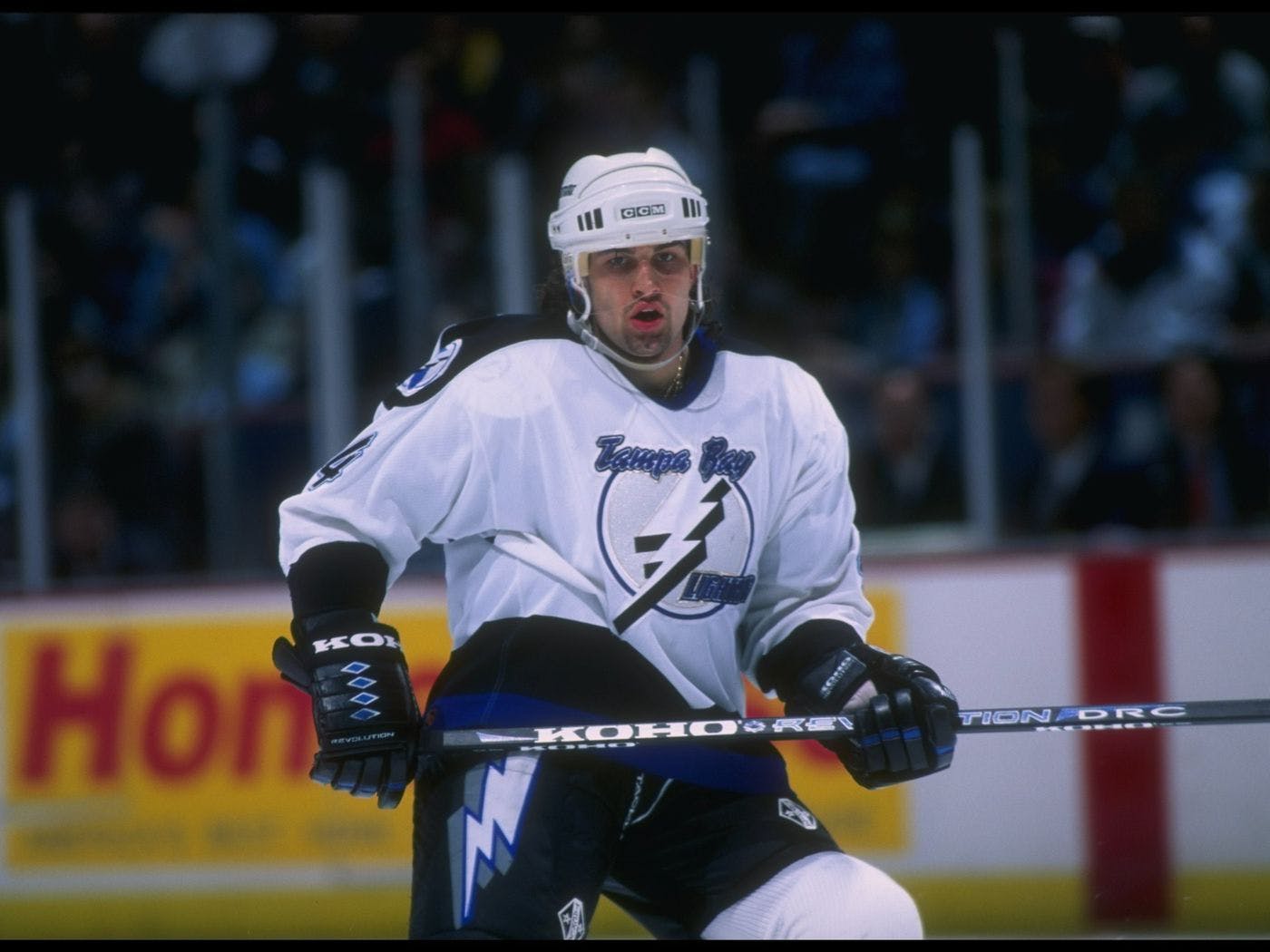 By Cam Lewis
14 days ago
The Edmonton Oilers have linked up with the Tampa Bay Lightning for a few trades in the past but one stands out as particularly important in the franchise’s history.
On December 30, 1997, the Oilers were in the midst of a five-game losing streak and sat at 11-20-9 following a 3-1 loss to the Philadelphia Flyers. The previous spring, the Oilers had generated quite a bit of hype after they snapped a four-year playoff drought and beat the heavily-favoured Dallas Stars in the first round. Missing the playoffs after that would be a huge letdown.
General manager Glen Sather went ahead and pulled the trigger on a huge deal to shake things up, sending young forwards Jason Bonsignore and Steve Kelly along with defenceman Bryan Marchment to the Lightning in exchange for Roman Hamrlik and Paul Comrie… 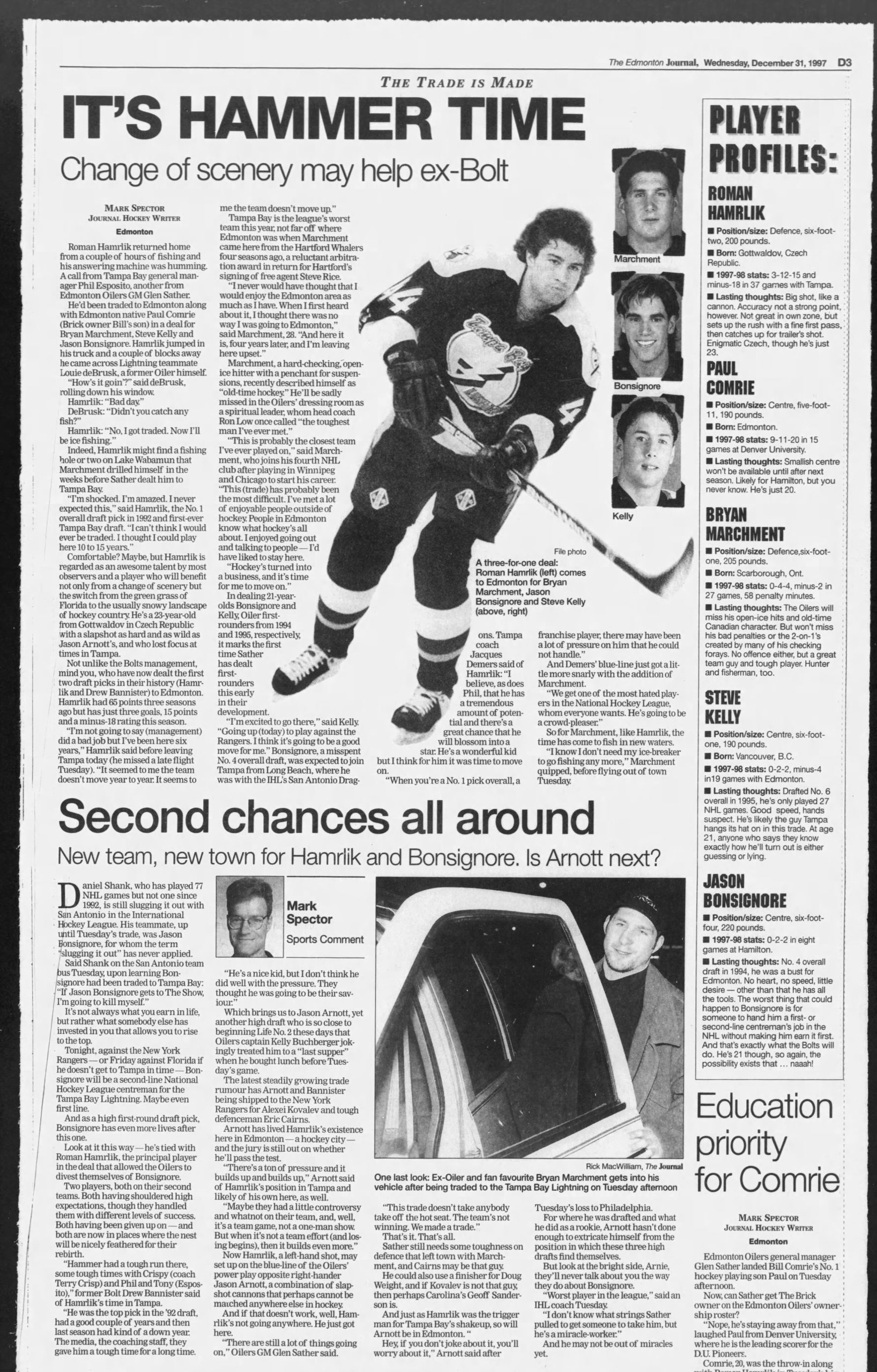 Source: The Edmonton Journal, Dec. 31, 1997. Accessed via Newspapers.com.
Hamrlik had been Tampa’s first-ever draft choice, going No. 1 overall in 1992. He stepped into the league immediately at 18 years old and was the player that the Lightning were planning to build their franchise around.
At the time of the trade, Hamrlik was in his sixth season in the league. He had put up some impressive scoring numbers, highlighted by a 65-point performance in 1995-96 that resulted in him finishing seventh in Norris Trophy voting, but he was widely regarded as a giveaway machine and disaster defensively, as a career minus-124 rating with Tampa plagued his reputation.
Going back the other way was a significant package of talent from Edmonton. Marchment was a rugged defensive defenceman who could eat minutes and throw bone-crushing hits, so his loss would be felt on the team’s blueline. Bonsignore and Kelly had been two of Edmonton’s recent top draft picks, at No. 4 overall in 1994 and No. 6 overall in 1995 respectively, but they were struggling to break into the NHL.
Hamrlik had a difficult time with the pressure of being the key cog on a brand new team, so Sather’s gamble was that he would thrive playing in a different environment with a better supporting cast. It was a risky bet, as he was giving up a quality veteran defender and two young forwards with draft pedigree.
The bet paid off as Hamrlik quickly established himself as a top-pairing defender alongside Boris Mironov, giving the Oilers the puck-moving defenceman they badly needed. Edmonton went on a six-game winning streak in January of 1998 and earned a playoff spot after a strong finish to the season. Just as they had done the previous season, the Oilers pulled off an upset over a heavily-favoured team, beating the Colorado Avalanche in seven games.
Hamrlik played two more seasons with the Oilers and the team made the playoffs in both of them but didn’t get past the first round. He appeared in 196 games with the Oilers and scored 22 goals and 103 points and had a plus-13 rating, a significant improvement from his time with the Lightning.
In June of 2000, Kevin Lowe was hired as general manager after Sather left to join the New York Rangers. His first major move as general manager was trading Hamrlik to the New York Islanders, as the defender had become too expensive for the cash-strapped Oilers to keep around.
Coming back to Edmonton from New York in the Hamrlik trade was defenceman Eric Brewer, who the Islanders had drafted with the No. 5 overall pick in the 1997 draft, and a second-round pick, which they used on forward Brad Winchester… 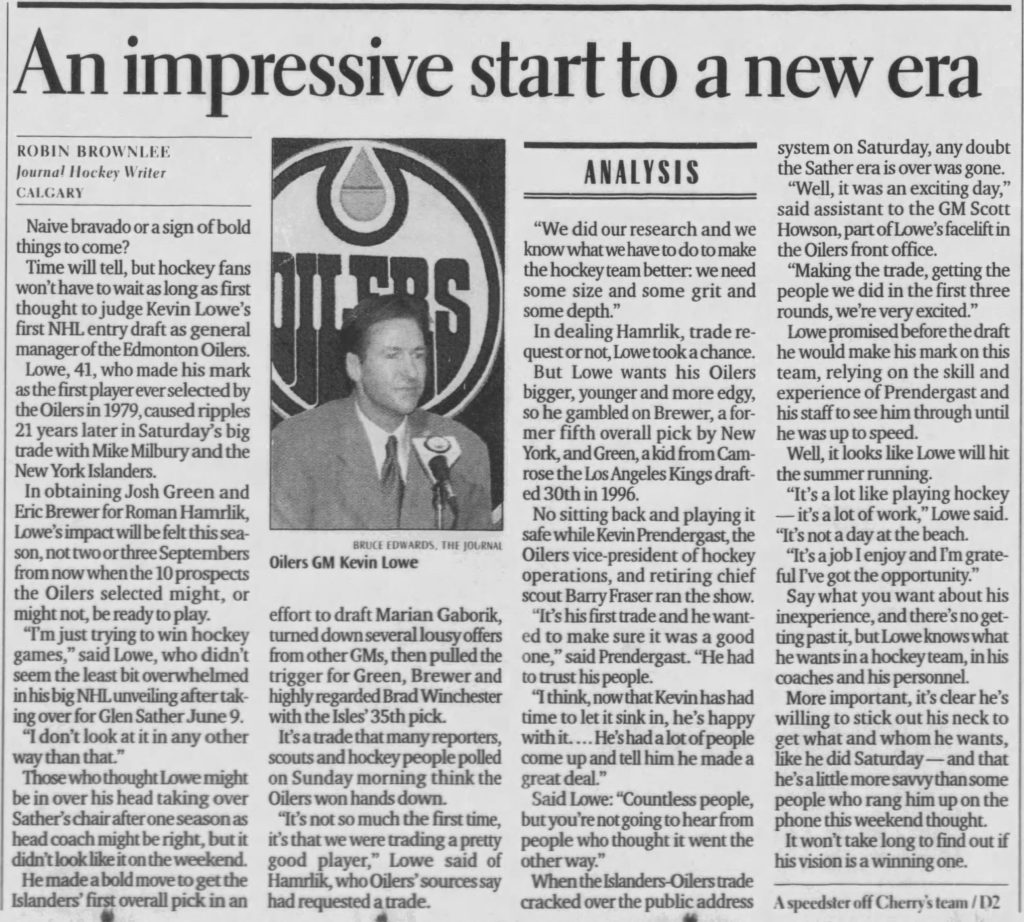 Source: The Edmonton Journal, June 25, 2000. Accessed via Newspapers.com.
Brewer was a good defender for the Oilers for three seasons between 2000-01 and 2003-04 but the biggest role he played for the team was when he was the centerpiece of the deal that Edmonton sent to St. Louis in exchange for Chris Pronger. The Blues were one of the first teams ever to be in salary cap hell immediately following the 2004-05 NHL lockout and they couldn’t afford to keep Pronger around so Lowe swooped in and capitalized.
Ultimately, Sather taking a gamble on Hamrlik wound up being an incredibly important move in the history of the Oilers. They traded away a pair of forwards who wound up being busts in exchange for a very good offensive defenceman who made good on his potential in Edmonton. Hamrlik’s value was felt long after he left as the trade that sent him to the Islanders directly led to the Oilers landing Pronger in 2005.
It’s interesting to look back at trades that happened in the past and try to imagine what they would look like in the present context.
The 2022-23 Oilers are wildly different than the 1997-98 Oilers, as the current version of the team doesn’t have to constantly play the same game of musical chairs that the previous version of the team had to play because of the budgetary constraints of being a small-market NHL team in the late-90s. But there’s certainly still a parallel here, as the Oilers are yet again looking for a solution on their blueline.
Acquiring an impact defenceman of Hamrlik’s caliber in the middle of a season would require a gutsy trade in which important players would be going back the other way. Is Ken Holland willing to do so this year?