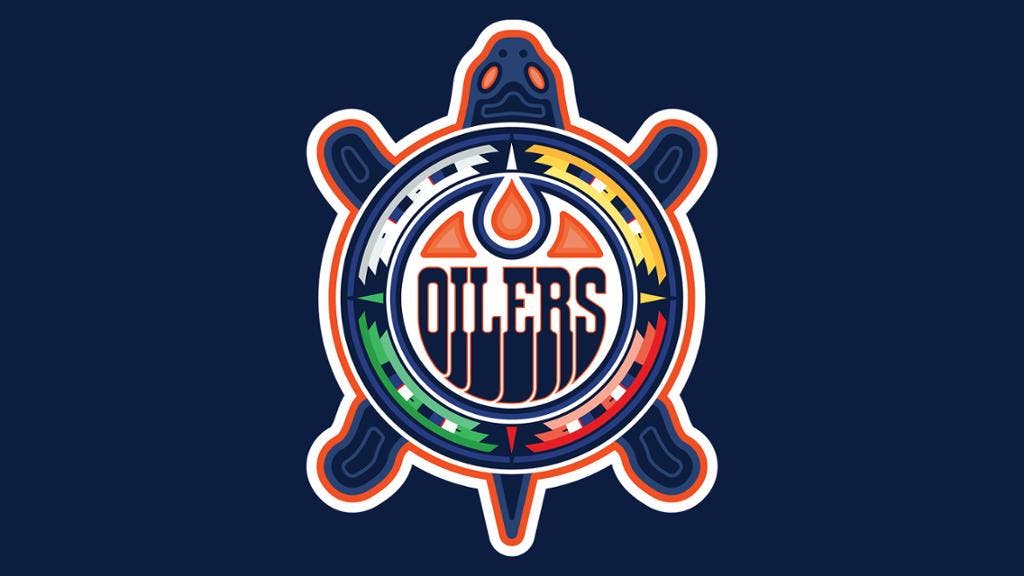 By Zach Laing
1 year ago
The Edmonton Oilers’ Nov. 1 home game will have some special meaning.
The club announced this week they will be hosting an Indigenous Celebration Night when the Seattle Kraken pay visit.
The night is set to honour the culture and creativity of Indigenous communities of Northern Alberta and a partnership with Bigstone Cree Nation designer and artist Lance Cardinal will help do that.
Cardinal created a special Oilers logo, as seen above, that will be incorporated into Monday’s game presentation.
“The logo, which features a stylized Oilers mark incorporated into the body of a turtle and highlighted by eagle feathers, represents creation, wisdom and spirituality with surrounding colours blue, green, gold and white all culturally significant to the Cree people,” the Oilers said in a statement. “The turtle is a reference to Turtle Island, the land mass upon which all 32 NHL teams compete. Additional Indigenous artwork will also be included in various elements of Monday’s game presentation.”
Chief Willie Littlechild (Treaty 6 First Nations), Grand Chief Arthur Noskie (Treaty 8 First Nations), Audrey Poitras (Metis Nation of Alberta Provincial President), and Edna Elias (Inuit Elder) will all be in attendance while the Canadian national anthem will be sung in both English and in Cree by Kiya Bruno, a member of the Samson First Nation. Fans will also be treated to a powwow dance done by Saddle Lake Cree Nation member Darrell Brertton Jr.
The 50/50 draw for Monday night’s game will benefit Native Counselling Services of Alberta
“We, at Native Counselling Services of Alberta, are pleased to accept the generous gift of the Oilers Foundation 50/50 net proceeds. These funds will allow us to expand our ability to provide increased services and supports to guide our people in healing from historic trauma,” said Marlene Orr, Acting Executive Director, Native Counselling Services of Alberta. “As children’s graves continue to be found at Indian Residential Schools, we acknowledge that reconciliation involves Indigenous people leading the healing with Indigenous people. We are grateful that the Oilers Foundation chose to support our work as an act of reconciliation and out of respect for our ability to work with our people. Thank you to all the fans who made this generous gift possible.”
Zach Laing is the Nation Network’s news director and senior columnist. He can be followed on Twitter at @zjlaing, or reached by email at zach@oilersnation.com.
News
Oilers Talk
Recent articles from Zach Laing