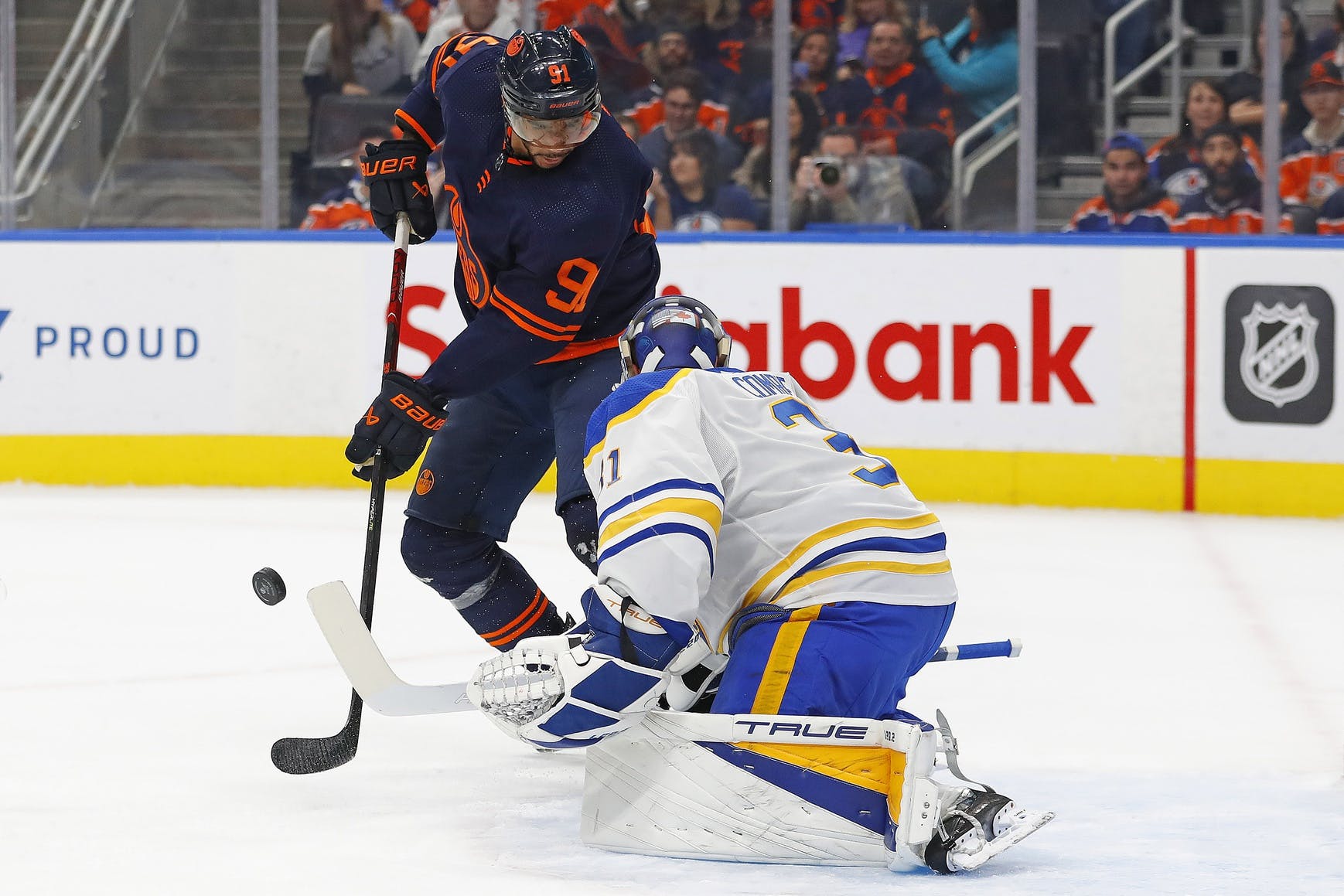 By Robin Brownlee
3 months ago
A lot of Edmonton Oilers fans filing into Rogers Place Tuesday when the Buffalo Sabres came calling were looking for a local kid makes good in the blue paint storyline. It turned out that’s exactly what they got.
Unfortunately for the Oilers faithful, it wasn’t Stuart Skinner stealing the show in his first start this season after a terrific outing in relief of Jack Campbell in a 4-3 loss to the Calgary Flames on Saturday. On a one-off night when two stoppers from Edmonton started against each other, it was Eric Comrie who grabbed the spotlight with 46 saves in a 4-2 win for the Sabres.
Comrie, 27, the little brother of former Oilers Mike and Paul Comrie and the youngest son of furniture man and philanthropist Bill Comrie, was the difference for the Sabres in a game when the top end of the Oilers marquee – Connor McDavid, Leon Draisaitl, Evander Kane and Zach Hyman – didn’t get much done.
Making his first NHL start in his hometown, Comrie, who was just four years old when older brother Mike made his debut with the Oilers in 2000, turned aside 22 of the 23 shots he faced in the third period to close the deal. The Oilers got off to a better start in this game, something right at the top of coach Jay Woodcroft’s to-do list, but they got no closer than Ryan Nugent-Hopkins’ 3-2 goal in the third.

“It’s just two points,” said Comrie, trying to downplay winning in his hometown. “It doesn’t matter where we are, who we’re playing against, what’s going on. It doesn’t matter if my family is in town or what. It’s about going out there with this group of guys and just giving all I have for this group no matter where it is or when it is.”
What the Oilers needed was a little more finish and a little less Comrie. They had their chances. They’ve also got some things they need to clean up. The 2-1 goal by Tage Thompson 44 seconds into the second period started with a Draisaitl giveaway at the Buffalo blueline before Nurse got walked in the slot.
“I would go back to the start of this second period — mistakes that were made, mistakes that were on our tape that are uncharacteristic of us,” Woodcroft said. “It proved we couldn’t outscore those mistakes, no matter how many shots we poured on their goaltender.
“We feel we’re going to score enough. It’s eliminating some of the errors that led to those goals against. Where I’m putting our focus is eliminating some of those freebies that I think cost us this game. Those were probably 40 of our best minutes, but I don’t think we’ve played a full 60 yet.”

After stopping all 31 shots he faced in relief of Campbell against the Flames on the weekend — a feat that had some people talking about a goaltending controversy — Skinner was just OK against the Sabres, making 20 saves. I expect that we’ll see Campbell back in the net against the Carolina Hurricanes Thursday.
Editorials
Featured
Oilers Talk
Recent articles from Robin Brownlee