Evander Kane is the elixir the Edmonton Oilers have been missing 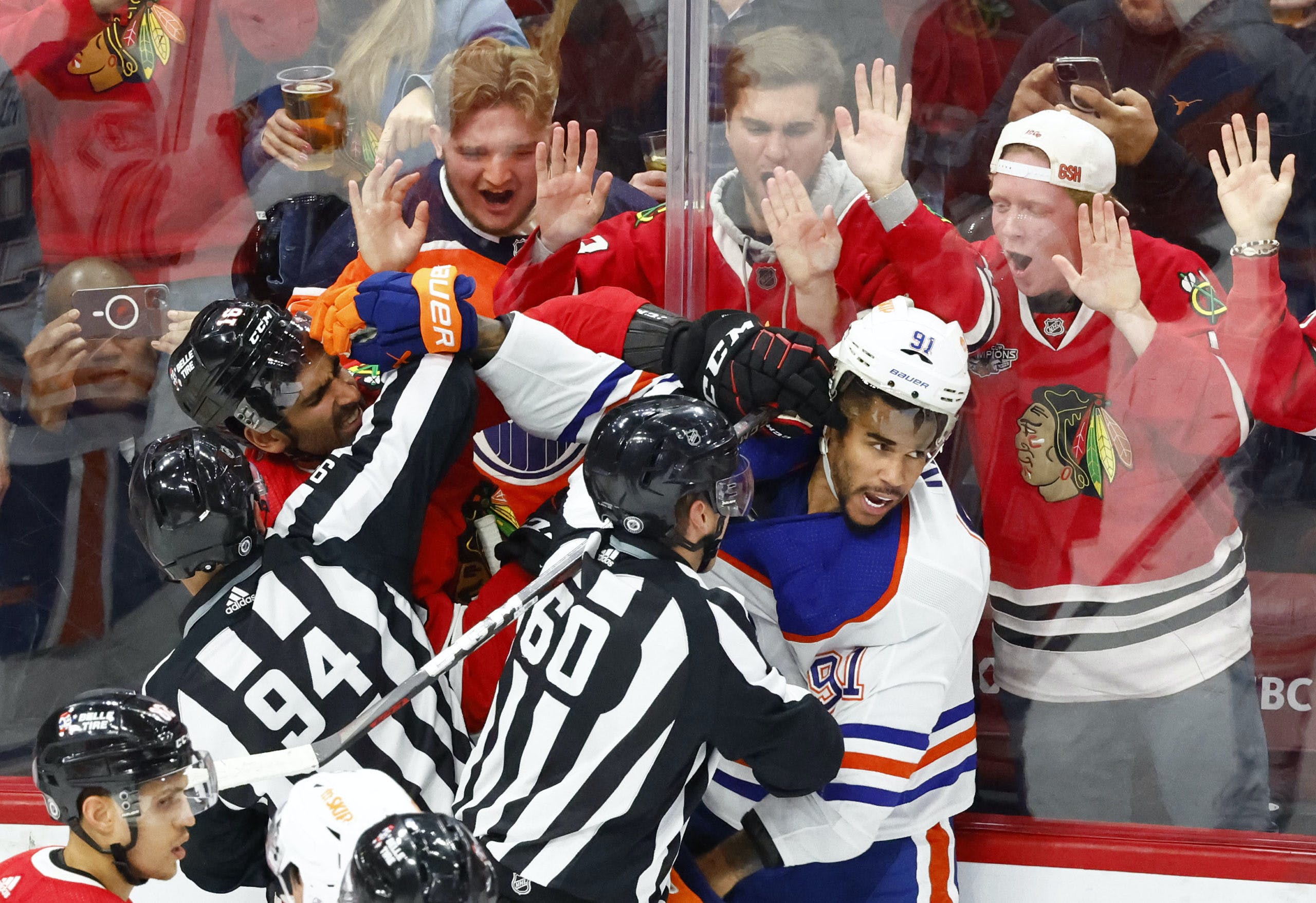 By Zach Laing
1 month ago
Evander Kane has arrived.
I mean, we already knew that last year, but last night was a bit of a coming-out party of sorts for the bruising winger after a sort of tepid start to the year. It’s not to say he’s been bad this year by any means, but he very quietly had only two goals and six points in seven games.
But last night, he seemed to hit a bit of a different level. He scored a great goal battling through contact, but it was waived off. It makes absolutely no sense but I digress.
What we did see from Kane, however, was a bit of a different game. He brought his grit and tenacity — albeit taking a few dumb penalties in the process — while also showing some great offensive flash. The Oilers bumped him down to the second line in the last two nights and has fit in well alongside Leon Draisaitl.
On the Oilers’ opening goal, he created space sucking two defencemen to him behind the Blackhawks net, before flipping a backhand to Connor McDavid. The magician then found Zach Hyman, who fired the puck into a yawning cage.
And on the OIlers’ game-winner? My lord. Kailer Yamamoto was in the high slot firing a pass to Evander Kane on the left side of the net, and a one-touch, cross-crease pass through two defenceman found a wide-open Leon Draisaitl.
Kane has never been known as much of a playmaker. His career high in assists came in 2011-12 when he posted 27. This year alone, Kane’s already got six apples and is on an 82-game pace for 61 assists. Will he get there? Unlikely. There is a world, however, where he could hit 40 with ease. Last year he paced 32 assists over a full season, and his head start this year is going to go a long way.
His ability to play different styles of game is becoming more apparent. He’s showing he can be a setup man. We know he can be a goal scorer, and they’ll come this year with him shooting a meager 6.1 percent — and lord knows the physical edge he plays with. He doesn’t care what anyone thinks of him. He plays with swagger. He comes to the rink pissed off every day. That’s a skill set in its own.
For the Oilers, he’s nothing short of a perfect fit in the top-six. He’s a big piece of this puzzle and brings an element this team has longed for in the past.
No disrespect to Pat Maroon, who was arguably the best winger Connor McDavid or Leon Draisaitl played with prior, but he’s no Kane. Milan Lucic was supposed to be “the guy,” but we alll knew how that went.
Kane seems to have put the past behind him. He seems committed to this team, this organization, this city. Now, let’s see just how much he can do in the pursuit of Lord Stanley’s Mug.
Zach Laing is the Nation Network’s news director and senior columnist. He can be followed on Twitter at @zjlaing, or reached by email at zach@oilersnation.com.
Featured
Nation Takes
Oilers Talk
Recent articles from Zach Laing